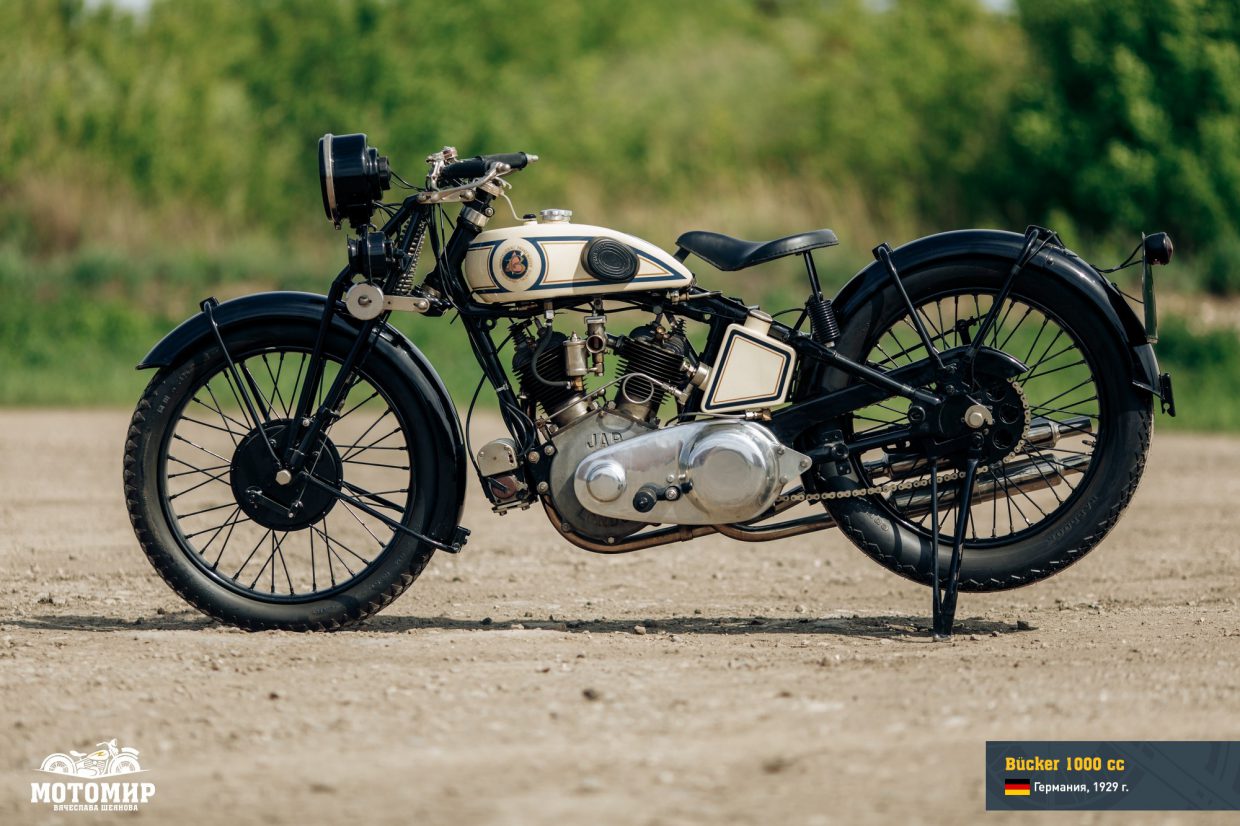 This entry is also available in: Russian German


The small German motorcycle manufacturer Franz Bücker opened his motorcycle factory in Oberursel in 1922, initially in the town center and from 1930 on a large factory site opposite the Oberursel engine factory (MO). In the MO, i.a. Circulating motors for the famous fighter aircraft of the First World War, the Fokker Dr-1 of the former imperial German Air Force, built. Since he completed the “motor school” in this factory during the war years, his mechanical talent was excellent and his motorcycles soon became famous far beyond the geographical borders of Hessen, where the picturesque town of Oberursel am Taunus is located. Franz Bücker recognized that winning races was the only sure way to attract attention and gain acceptance for his brand. As a result, he participated in a number of races, many of which he won on his own machines. One of the reasons for his success was the uncompromising quality of his machines, which made them very reliable at a time when reliability was not a matter of course in the motorcycle world!

Initially, like many other German motorcycle manufacturers, Bücker used various built-in motors such as: BEKAMO, GRADE, RINNE, BLACKBURNE and British JAP motors for his motorcycles. The largest was the 1000 cc JAP-V two-cylinder engine with 55 hp in the racing version, a huge achievement at the time! For comparison: The German Horex S8 with its own design, which is considered a very prestigious racing motorcycle, developed an output of 30 hp. at 5000 rpm Horex S8 from the collection «Motorworld by V.Sheynov»

This motorcycle reached a top speed of 170 km / h and was then the most expensive German motorcycle. A crazy speed on the streets of those days; In fact, without fear of contradictions, it can be said that a driver had to have a real death wish to drive so fast on these roads in front of the highway. The Bücker was virtually equivalent to the two fastest motorcycles in the world, the Tornax 1000 cc and the Rolls-Royce of motorcycles, the Brough Superior SS100, with the same JAP engine and one of the best British motorcycles of all time. Brough Superior SS100 from the collection «Motorworld by V.Sheynov» From the 1933s Bückers model range consisted of motorcycles from 200 to 600 ccm with engines from COLUMBUS and MAG in head and side-controlled versions. Small motorcycles with 100 cc capacity and two-stroke engines from Ilo and Fichtel & rounded off the program. The 1000cc JAP machine was no longer in the sales program. However, various victories in local races were still achieved with the JAP 250 ccm racing machine from 1930; During this time, some private drivers drove a Bücker-JAP racing machine but was not always competitive against the more modern factory racing machines from NSU, DKW, etc.

Nevertheless, his motorcycles sold very well in Germany and his name continued to be a manufacturer of first-class, reliable machines recognized During the Second World War, his factory-built spare parts and was active in defense. After the catastrophic end of the war, his work was used by the Americans as a repair shop for American trucks. This condition continued until 1948 when he was allowed to start producing motorcycles again. As was common in these desperate times, his first models were pre-war bikes, but he didn’t sit still. Among other things, he started to design and build his own braking systems, parts of electrical equipment, handlebars, calipers, and suspension parts, which made him a real manufacturer. In 1949, the driver Friedel Schön won the first German championship in the class with naturally aspirated engines since the Second World War with a 250cc Bücker JAP. BÜCKER launched its first post-war models, the Ilona 1, with the single-cylinder 250 cc Ilo two-stroke, and the ILONA 2 with the ILO 250 ccm two-cylinder engine, this reliable workhorse that drives so many other German, Belgian, French, Swedish, and Dutch motorcycles. Due to their immense strength, they were even bought and loved by police stations in Hessen, who used them with a Steib sidecar.

Interestingly, the police version with Steib sidecar was the same one that could be bought from the local dealer. The strength of the standard machine was such that no modifications were necessary. Until 1958, motorcycles with 125, 175, and 200cc ILO engines were built in addition to the ILONA. With these motorcycles, BÜCKER was still successful in reliability and off-road driving in the 1950s. Bücker’s son-in-law Heinrich Walz, who came to the family and the company after the war, was decisive
involved in the construction of the post-war motorcycle program and achieved many sports successes Bücker motorcycles were exported in Greece, Belgium, Holland, and Italy where were quite successful. This is particularly interesting because the factory had no money to advertise its bikes in these countries, they were sold strictly on the strength of the `Made in Germany´ label as were so many other bikes manufactured by small German companies.

Unfortunately, Bücker was not immune to the crisis gripping the German two-wheeled industry and saw his production plummet despite his rock-solid reputation. When output reached 200 units a year (from an average of 500 previously) Herr Bücker decided to pull the plug. Due to his timely decision, thereby avoiding bankruptcy, he possessed plenty of funds to start a large Ford Dealership, which he expanded to selling Glas cars, becoming a very successful automobile dealer.

Thanks to Bruno and Natalia Schmück for their help in preparing and editing the text.