George Brough was a man who loved motorcycles more than anything else in the world and on top of that he was a talented businessman. He had a very clear vision of all desires of the upper classes of British society, and therefore his specific and quite expensive product has always found its buyer 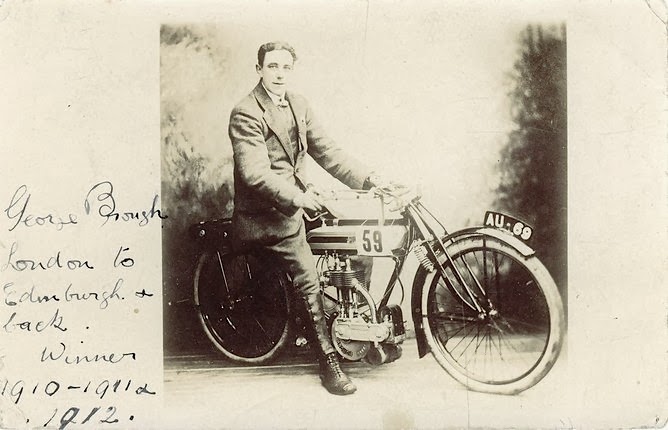 From the very beginning, ambitious George decided to be the best in the field, so he created a motorcycle equivalent of Rolls-Royce, and thus won the recognition of the elite clientele. From a very young age George’s father, William E. Brough, taught him everything about motorcycle business, so he had plenty of experience.


George not only knew all the specifics of production but as a schoolboy, he was already involved in racing competitions, where he won numerous gold medals and became well-known in motorcycle communities.

As time went by, father and son’s views on business strategy began to differ, there were a lot of contradictions and disputes. William was in favor of flat tanks and horizontal twin-cylinder engines, while George was eager for upgrades and was ready to adopt a new V-shaped twin-cylinder engine of larger capacity. In fact, George wanted to create some kind of elite analogy of Harley-Davidson and Indian bikes, while William was quite happy dealing with the middle segment of the market and didn’t want any changes. Soon it became clear that George would no longer be able to work in the shadow of his father. 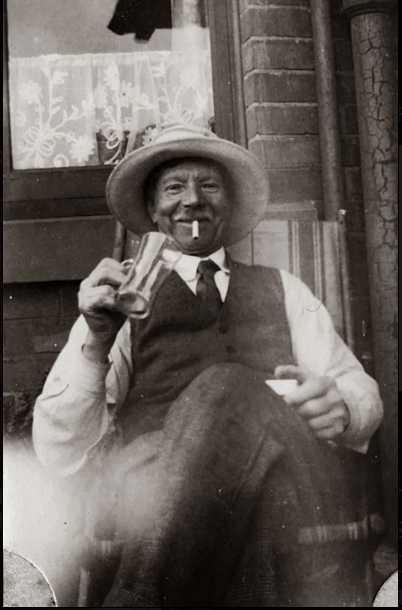 A major conflict that occurred between them in 1919 had ended the family union. After that George not only decides to leave the family business but also wants to surpass his own father by becoming his main competitor. This intention was fully reflected in the name of his new motorcycle, “Brough Superior”.

Despite the competitiveness, William gave George his share of the family business (£1,000) and George invested it in a piece of land on Haydn Road in Nottingham and opened a small workshop there. 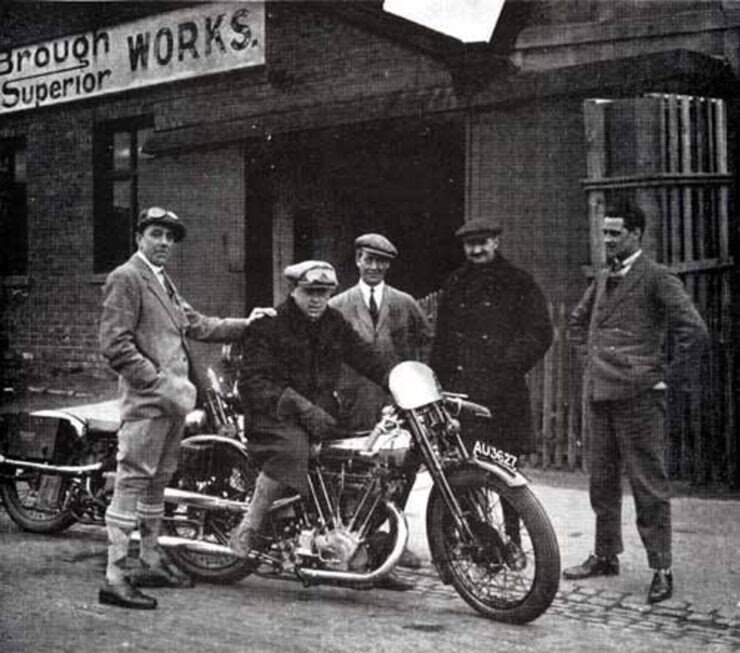 The first handmade Brough Superior motorcycle was released in 1919 and immediately became a style icon and the object of desire of many members of London’s high society. The design of the motorcycle was so successful that it remained essentially unchanged for almost 20 years.

The rich experience and deep knowledge of motorcycle engineering allowed George Brough to create a unique product. He was able to establish new “fashion trends” rather than follow them, and leave all competitors far behind. In other words, he knew everything about motorcycles and designed machines as for himself, so the result of his work was flawless! 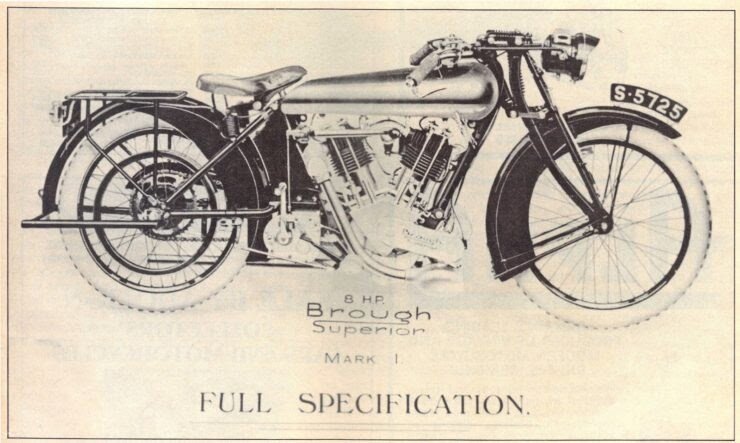 The very first models, which include the Mark I (OHV), Mark II Standard, Mark II Sports, were equipped with the V-shaped 986-cс OHV J.A.P. engines, Amac carburetors and magneto ML. Sometimes the V-shaped two-valve 999-cc Barr & Stroud engines were used and the Swiss MAG engines (733 cc or 993 cc). There were also the three-speed Sturmey-Archer gearbox and Montgomery front fork. 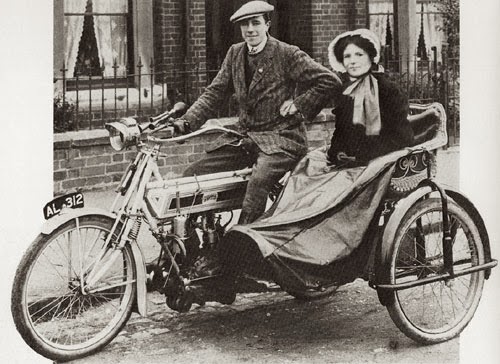 As you can see, George Brough often used components made by other manufacturers, as, by the way, most of his competitors with even less expensive machines. So how did he explain such a high price of his bikes (the cost of a new Brough Superior was comparable to the cost of a small country house!), and how did he prove that his bikes are really “superior”?

The thing is that George was a brilliant “salesman”. He attracted the rich customers by the fact that his motorcycles were assembled twice! The first assembly was to ensure that all the parts fit perfectly, then the vehicle was disassembled, painted, assembled again and only then it was for testing. It turned out that the “superiority” of these bikes was in peerless quality and perfection of design.

Brough Superior SS80 presented in the collection of the museum “Motorworld by V.Sheyanov”

In 1922, two new models appeared in the company’s production program. The first was the “SS80” with the side-valve two-cylinder 986-cc J.A.P. engine and the other version of “SS80” with the two-cylinder 732-cc MAG engine, which was equipped with the outdated “valve over valve” gas distribution mechanism. Perhaps that is why the second model disappeared from the range the following year, while the first one happened to be so successful that it became the most popular Brough Superior motorcycle of that time. This motorcycle was produced in two modifications: the standard version and the “De Luxe” version. The De Luxe SS80 was distinguished by the rear suspension, which was similar to the one used on Vincent motorcycles since 1927. 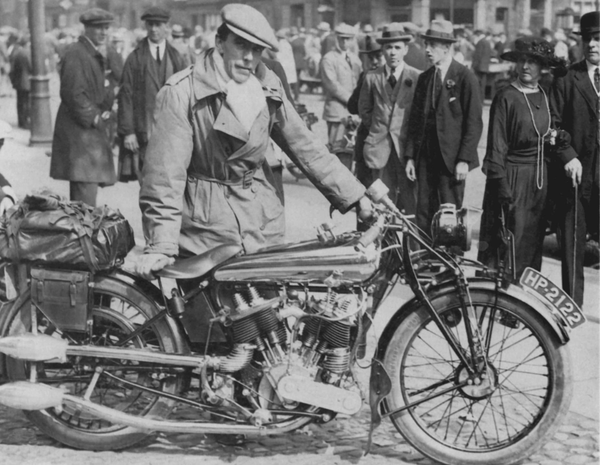 In 1922, on the famous Brooklands track, George set the absolute speed record for side-valve motorcycles (over 100 mph!), while riding a specially prepared version of the Brough Superior SS80.

The sport achievements have obviously helped to maintain the “superior” image of the brand. George himself was quite sensitive to each public appearance of his motorcycles and his standards of preparing the vehicle for the race were extremely high. All his bikes always shined from the most thorough polishing – so much so that in its very first appearance, Brough Superior SS80 was nicknamed “Spit and Polish”. 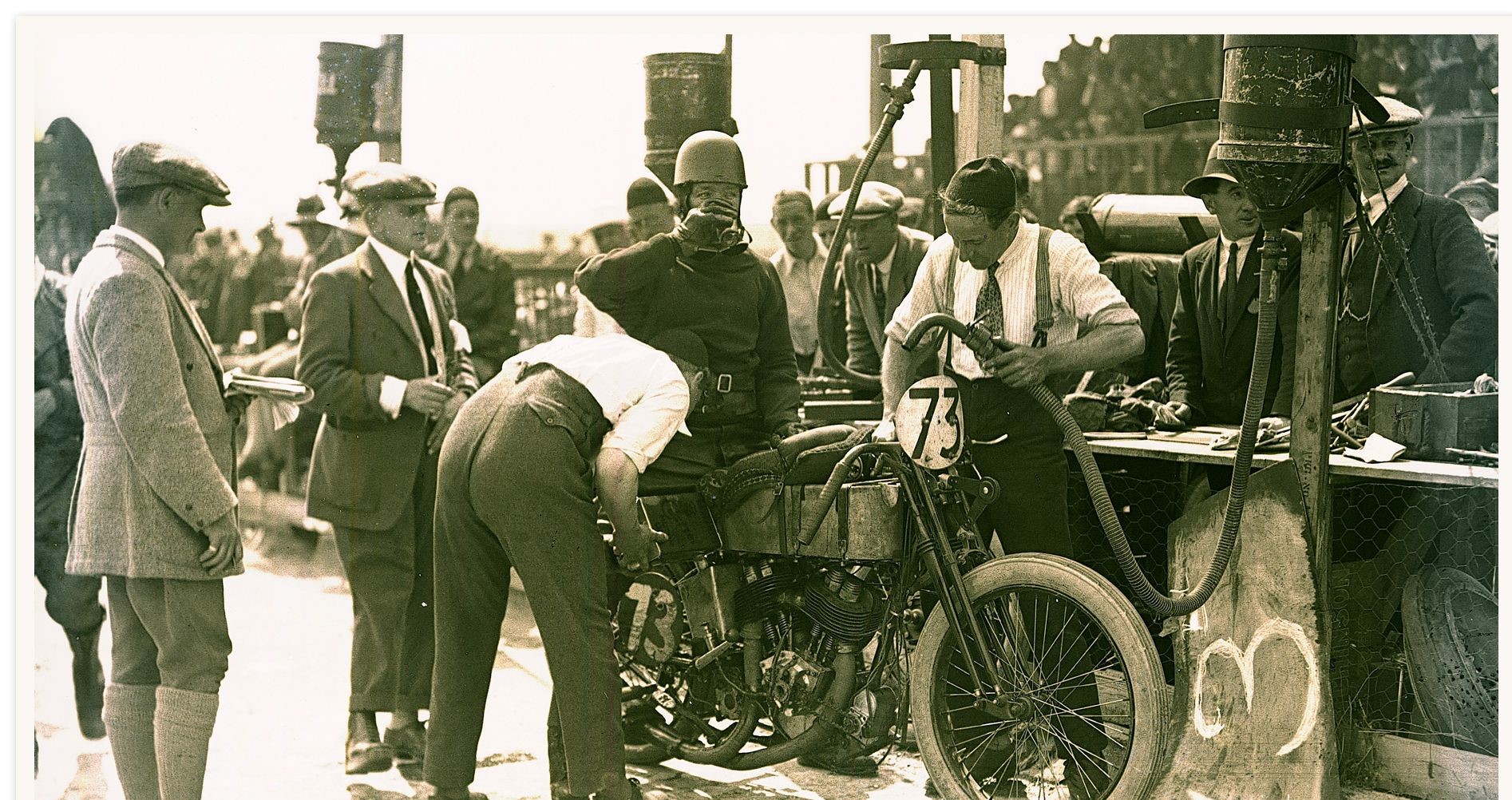 The famous motorcycle racer of the 20s, Herbert ‘Bert’ le Vack, also contributed to the promotion of Brough Superior motorcycles. In 1924, he set a new speed record of 191.59 km/h on a specially prepared 1,000-cc OHV model. Herbert also participated in the design of a new duplex frame, which was much more durable and reliable.

This frame became a part of the design of the most famous model in the history of the company, “SS100”, which was launched in November 1924. The number “100” meant that the bike is able to reach 100 miles per hour. To prove it, each motorcycle was provided with a special certificate confirming that such speed was achieved during the tests.

The Brough Superior SS100 was equipped with a two-cylinder V-shaped OHV J.A.P. engine with a working volume of 990 cc. The maximum engine power, according to modern estimates, was 45 hp at 4800 rpm (the Brough Superior company, like Rolls-Royce, never provided official data on the engine power of its vehicles). 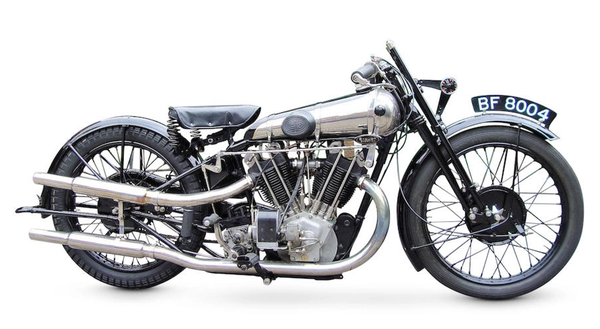 Three great men were involved in the creation of this new engine which was named “Super Big Twin”: George Brough himself, racer Herbert Le Vac, and the famous engine designer Valentine ‘Val’ Page. This perfectly designed motor became the heart of the fastest machine of that time! 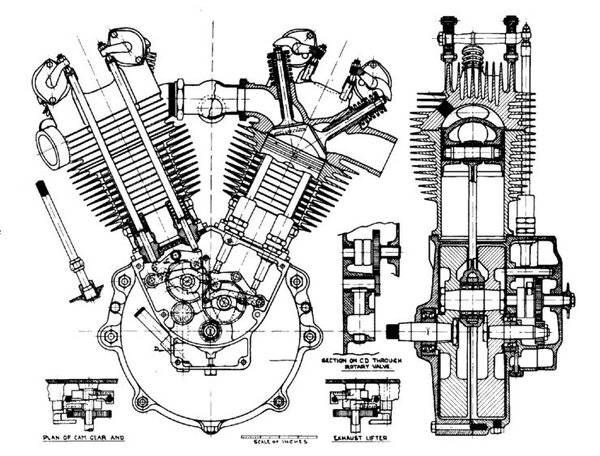 Instead of the parallelogram fork used on earlier models, the SS100 motorcycle received a special lever fork of the Castle type (it was clearly copied from Harley-Davidson motorcycles). Later, such forks were applied on all models of the company. 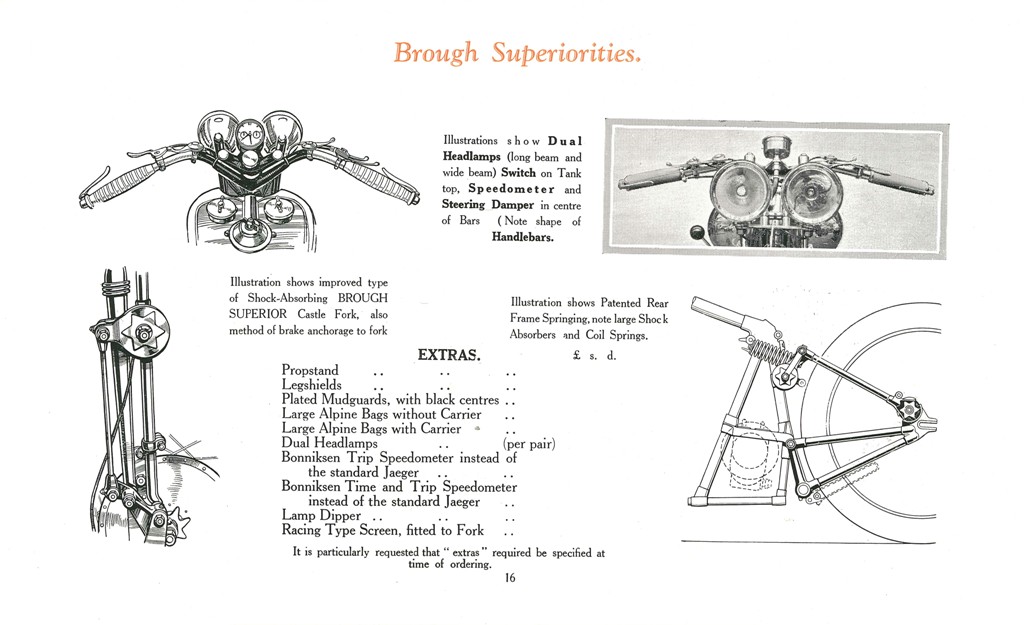 Since 1927, the “SS100” was also produced in a special tourist version “Alpine Grand Sport”, which was equipped with a full set of electric lighting and luggage bags. There was also the “Pendine” modification, named after the seven-mile “Pendine Sands” beach with a hard and perfectly flat surface, which was used as a track for speed testing. 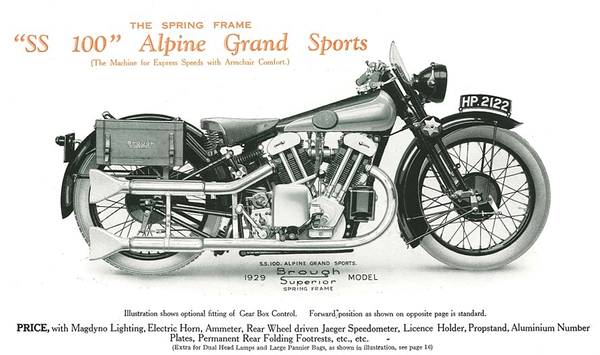 It is widely believed that there are no two identical Brough Superior motorcycles, as each vehicle was custom-made, according to the physiological specifications of the future owner.

At the autumn exhibition of 1927, the company presented a few other models, which had the two-cylinder V-shaped J.A.P. engines of smaller displacement (680-cc OHV and 750-cc SV). But the real breakthrough was an experimental motorcycle with a four-cylinder V-shaped OHV 994-cc air-cooled engine!

The power unit was located in a duplex frame in such a way that the axis of the crankshaft was aligned with the direction of movement of the motorcycle, and the torque was transmitted by a chain to the rear wheel through a four-speed gearbox. Next year, the company introduced another experimental four-cylinder motorcycle, this time with an in-line 816-cc SV air-cooled engine. 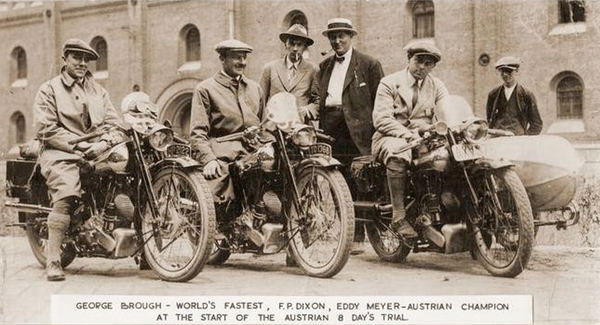 In the late 20s, George Brough began experimenting with soft rear suspensions. He chose a design patented by Bentley & Draper, which consisted of a spatial triangle of the rear pendulum and a spring element under the saddle. Since 1928, this suspension was optionally installed on the “SS100” model and all its modifications.

In 1930, the “smallest” model of the range made its debut. It was named the “Overhead 500”, with a 500-cc two-cylinder V-shaped OHV J.A.P. engine. This model was fine but unreasonably expensive so in two years of production only nine motorcycles were sold. 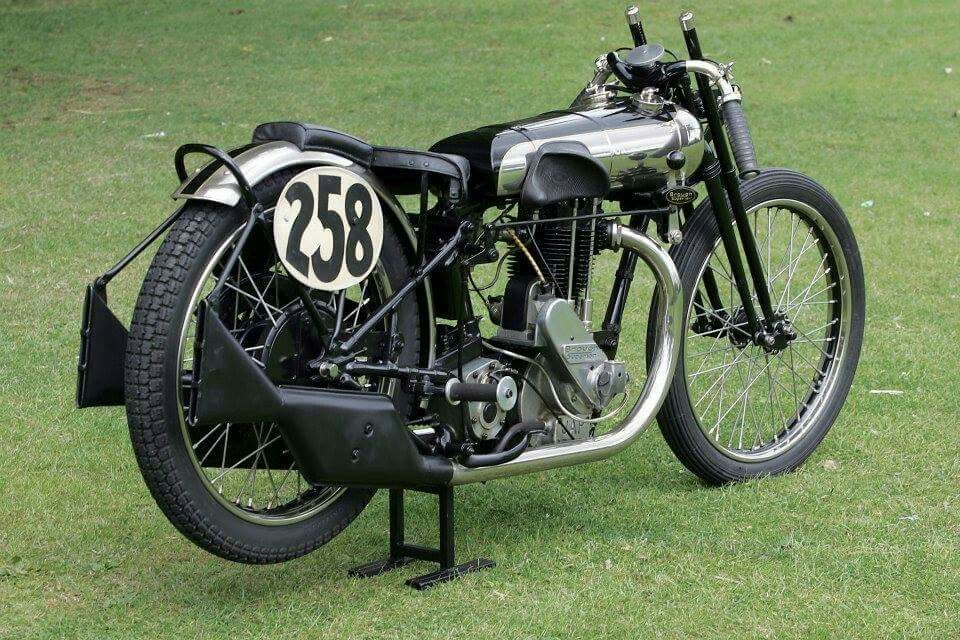 At the Autumn Motor Show of 1931 the company presented another four-cylinder motorcycle. This time engineers decided not to bother with designing their own power unit and simply took a slightly modified in-line 800-cc liquid-cooled side-valve engine and three-speed gearbox (with reverse gear) from the Austin Seven automobile! 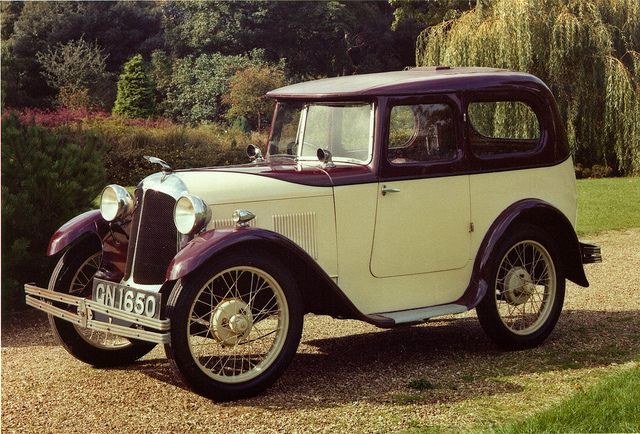 Since this motorcycle was used exclusively with a sidecar, the designers decided to implement twin rear wheels, between which were the cardan shaft and main gear. This bike, in fact, was no lighter than Austin, equal in dynamics and much more expensive, but somehow the company managed to sell a dozen of these monsters. 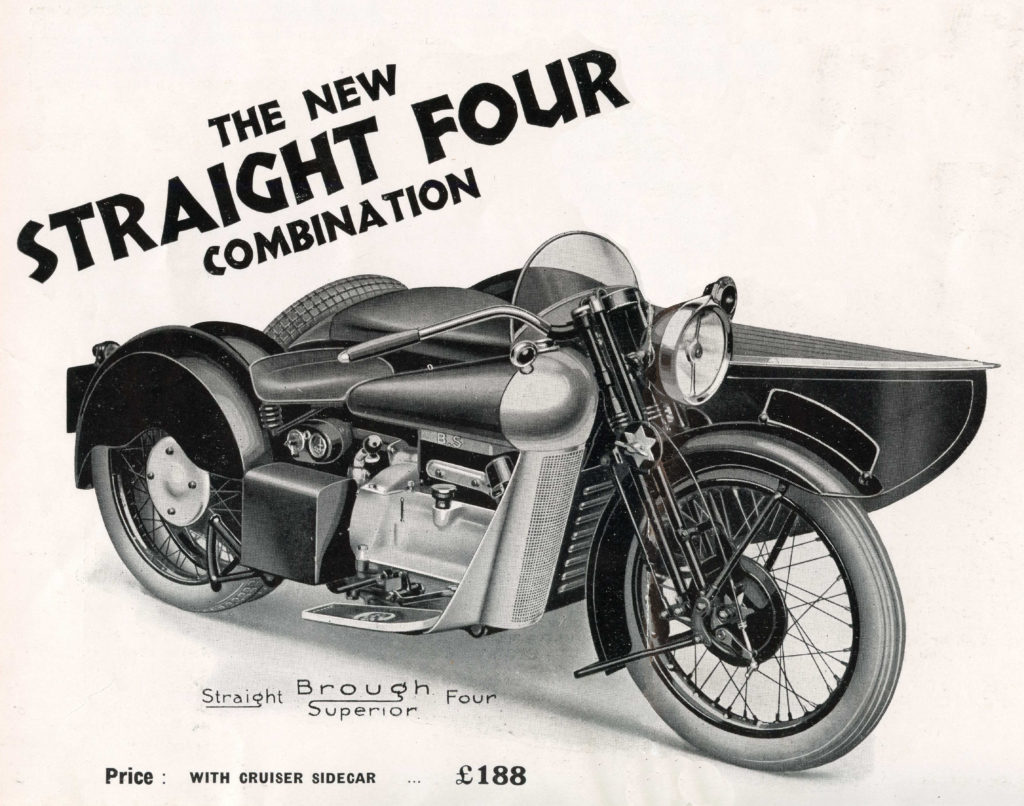 This motorcycle was much appreciated by British police. 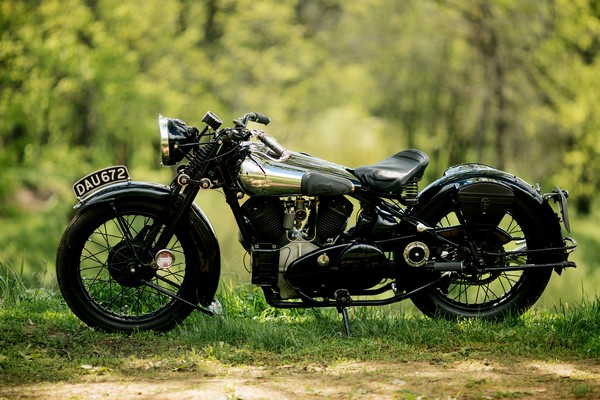 Since 1935, the Brough Superior SS100 was powered by a new 1,000-cc V-shaped Matchless engine with a four-speed Norton gearbox, but the rest of the “package” was still in accordance with the original design of 1924. The “11-50 Special” version was equipped with a 1,150-cc engine. Since 1938, for additional price, the motorcycle could be equipped with a spark plug type rear wheel suspension. 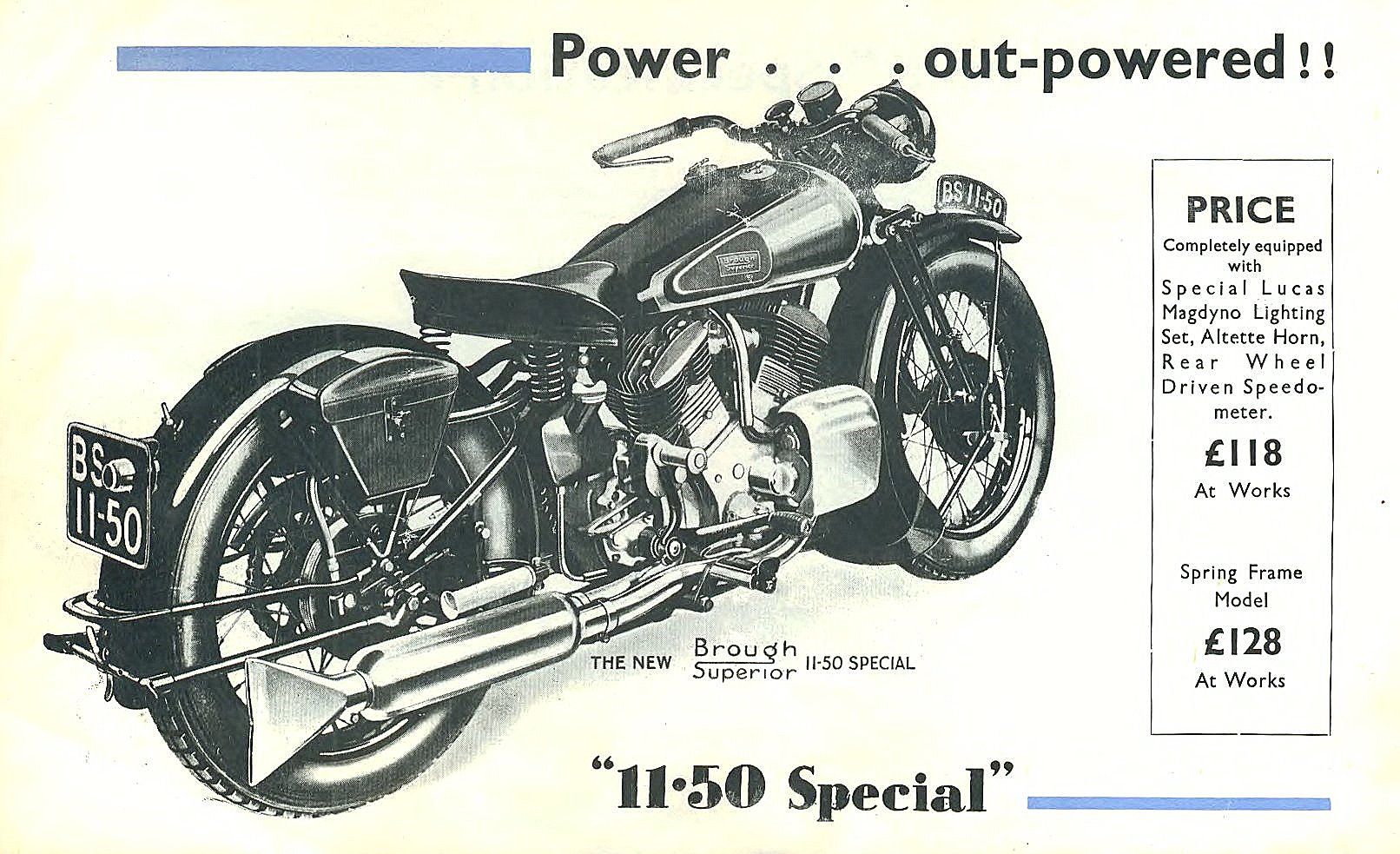 At the 1938 London Show, George Brough presented his most promising motorcycle, the experimental “Golden Dream” model, with a four-cylinder 1,000-cc OHV engine, which actually consisted of two two-cylinder engines (put on top of each other) connected by a gear transmission. The torque was transmitted to the rear wheel through a four-speed gearbox, cardan shaft and worm gear. The duplex tubular frame was connected to the Castle fork at the front, and the rear wheel was attached to the spark plug suspension. 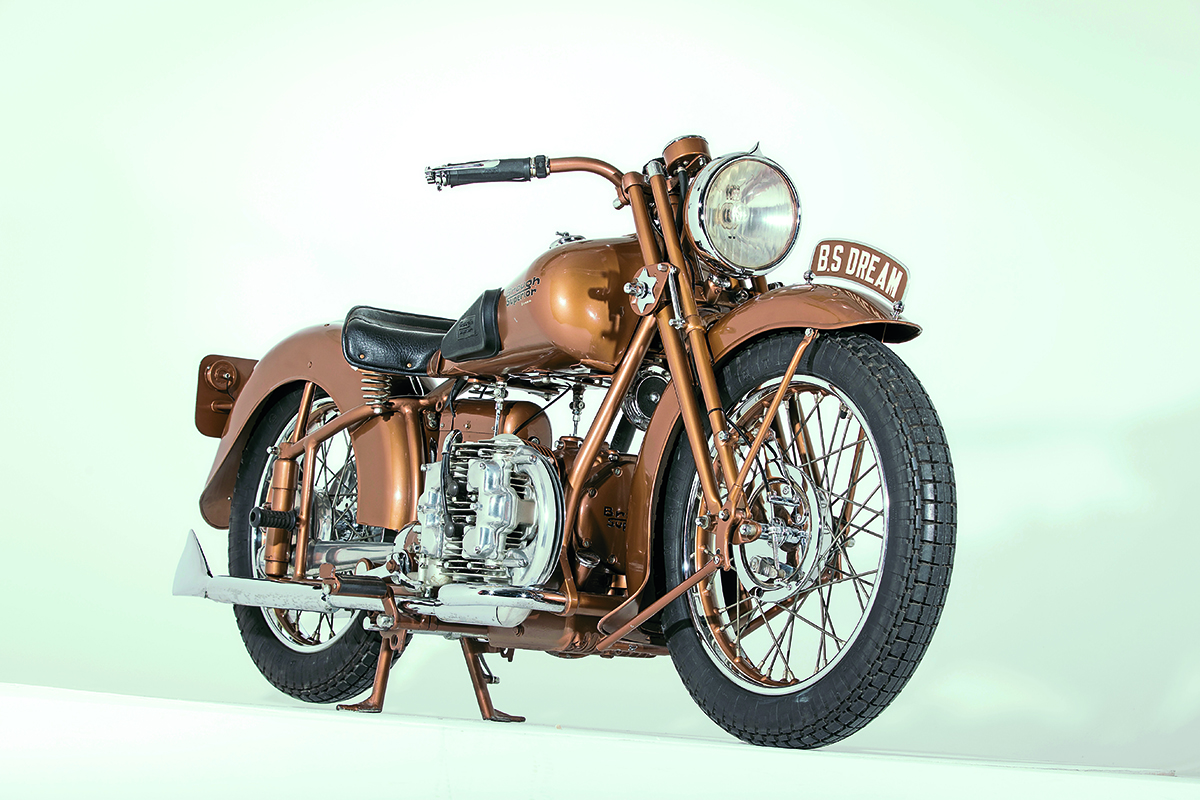 This machine was Brough’s final attempt to create another perfect motorcycle, but further testing revealed many “childhood diseases” that were never fixed. 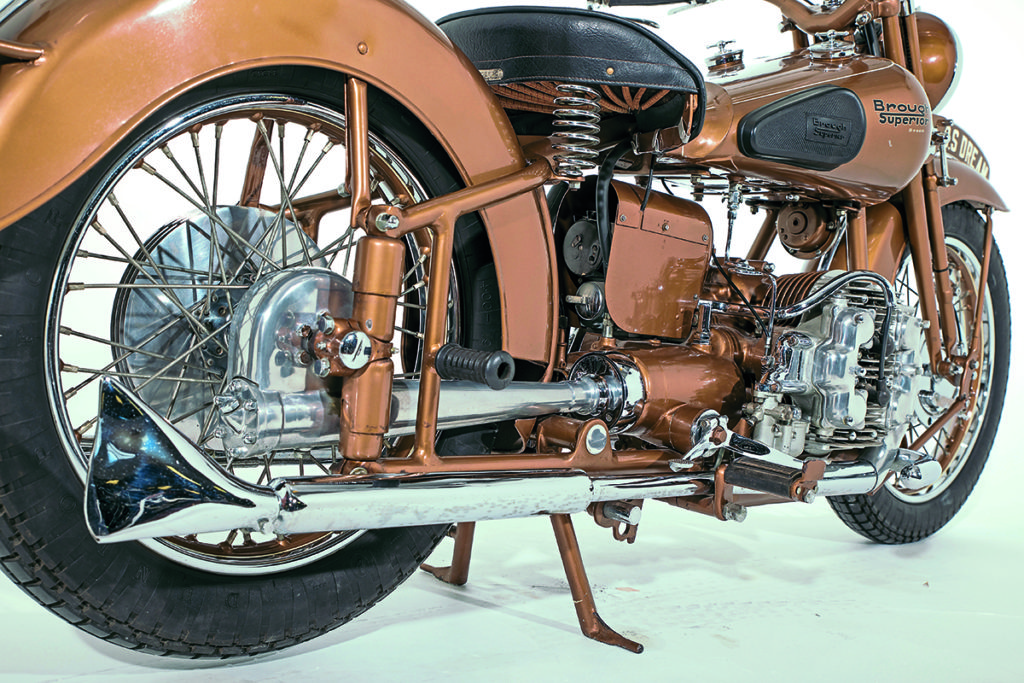 In September 1939, the factory stopped the production of motorcycles and switched to manufacturing of equipment for the aviation industry. The company remained in this field even after the war, but despite this the Brough Superior is still considered one of the greatest brands in motorcycle history.