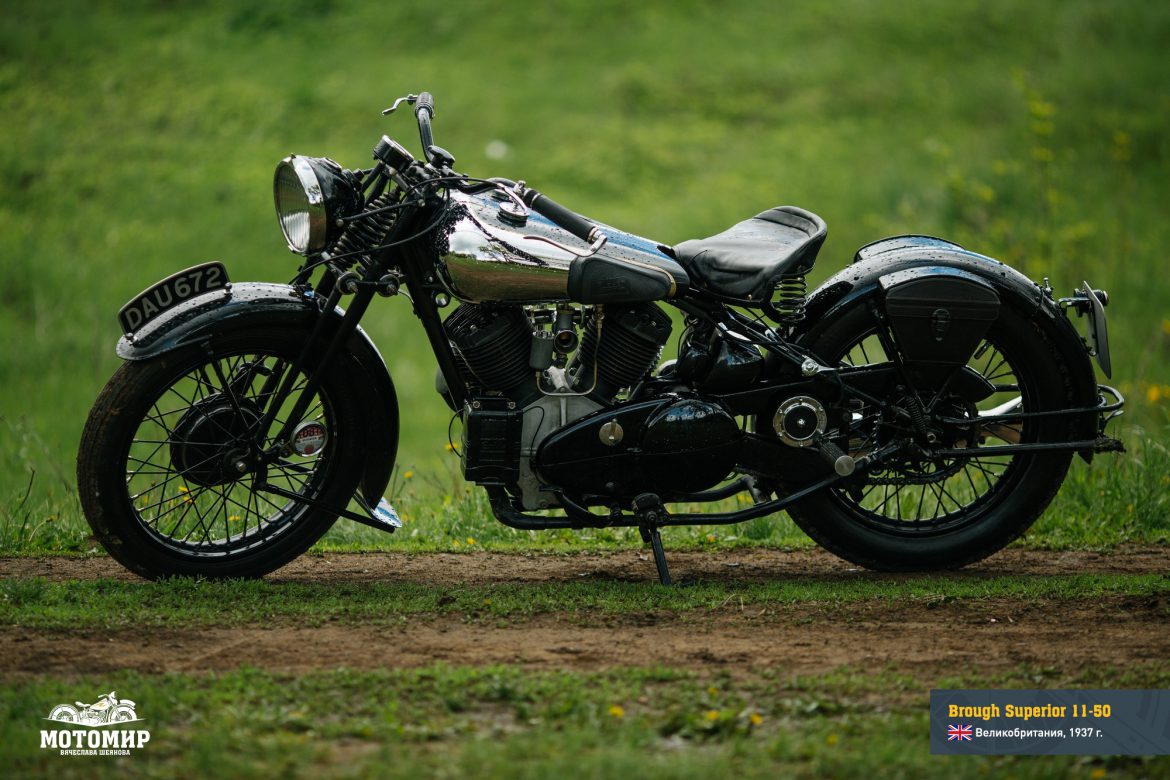 The economic recession in Great Britain was almost over by 1932, and British motorcycle manufacturers started noticing that sales were rising. George Brough, however, who was firmly established in the high-end segment of the market, still had problems selling his machines. His Brough Superior model range was not updated for a while, so it was necessary to do something in order to attract the customers.

The Brough Superior model range presented in 1932 during the motorcycle show at the Olympia Exhibition Center had only one updated motorcycle model: it was SS80 which had a rigid frame, aluminum exhaust pipes, and a smaller gas tank. This machine got a nice response, but it was not great enough to get back to the pre-crisis sales levels. The next year, during another motorcycle show at the same Olympia center in London, all motorcycle models of this brand were presented in their modernized versions. 7-inch front brakes and 8-inch rear brakes were a novelty. A new option appeared, featuring the interchangeable wheels (including the sidecar wheel), which made having a spare wheel a very practical idea. They were all easily detachable and could be used for the preceding models as well. 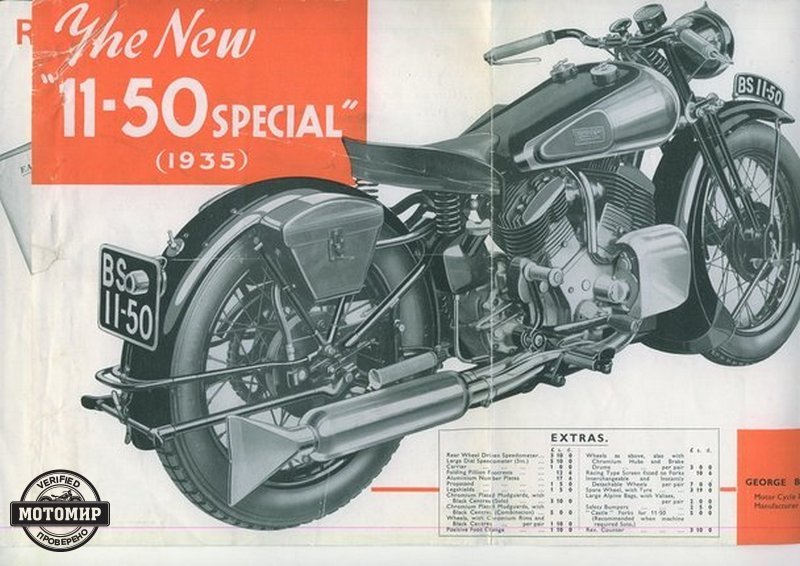 Still, there was no significant sales increase happening. It was necessary to take radical measures in order to keep the company’s position on the market. Thus George Brough hastened to announce the release of two new motorcycles. One was the 680-cc, budget-priced Junior — a dream of those who formerly could not afford the Brough Superior. The other one was a new heavy L-head motorcycle designed from scratch and called “11-50”.

Model 11-50 was designed as a response to many requests from abroad, mostly from police officers, who needed a motorcycle as powerful as SS100, but with a simpler L-head engine and a lower price tag. 11-50 got a double-cylinder, V-shape, 1096-cc JAP LTZ motor, with a bore and stroke of 85.7 × 95 mm — George Brough said that it was designed especially for Brough Superior. The angle between the cylinders was equal to 60 degrees, in contrast with the usual 50 degrees, which increased engine torque and was promising rides a smoother ride in combination with the sidecar. 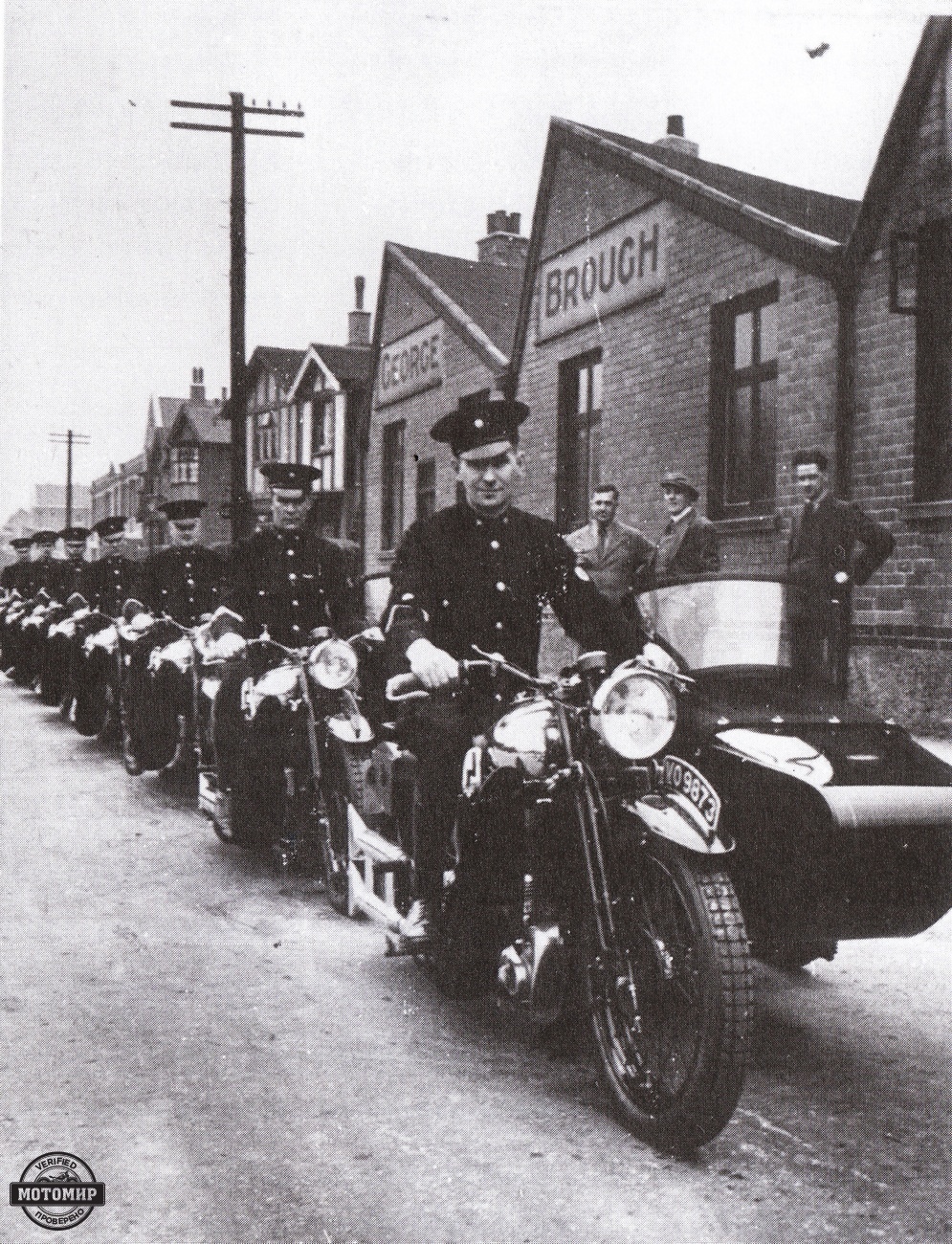 British policemen on their new Brough Superior motorcycles. SS80 leads the column, followed by 11-50 models. George Brough stands in the background (in the middle).

Announcing his new motorcycle George Brough was promising an 1150-cc engine, but he did not mention bore and stroke. This was a cunning marketing ploy, so typical of George. The reason was that at the time this combination, “11/50”, meant 11 RAC hp (RAC stands for Royal Automobile Club), which was the horsepower parameter used in Great Britain to calculate tax on moving vehicles and 50 hp effective output. In other words, when the potential customer heard the name of this motorcycle model, he would imagine a very powerful machine, which promised great savings to its owner. In reality, however, the engine capacity of the 11-50 model was only 36 hp.

The solo version of this motorcycle model could reach 135 km/h and, when used with the sidecar and having two passengers on board, it could go as fast as 110 km/h.

Brough Superior 11-50 was well accepted by critics, but most importantly, by police officers, for whom it was designed in the first place. This is not surprising, since with the guaranteed speed of 110 km/h practically no law violator could escape from a patrolman behind the wheel of Brough Superior 11-50.

The Book of the JAP Engine (англ.)