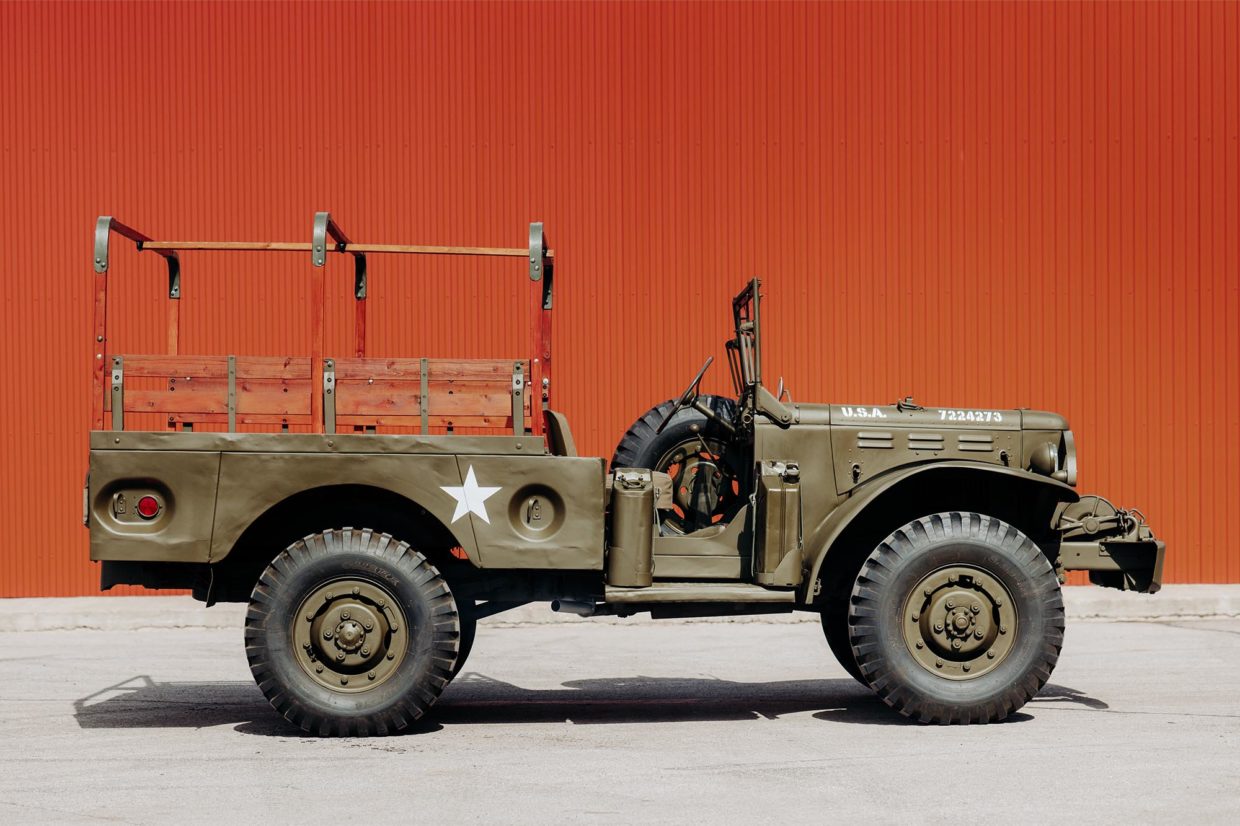 The Dodge WC-52 presented in our museum is one of the many models of all-terrain vehicles of the brand produced during wartime. There is a widespread opinion that the abbreviation “WC” means “Weapons Carrier”, but after a more detailed study of the question, it becomes clear that a combination of Latin letters and numbers represent an index, where the first letter stands for the year of production (trucks of 1940 had the index V, and those produced in 1941 and later – W), the second letter stands for payload. In our case, the “C” in the Dodge truck naming system was assigned to half-ton models and was retained for 3/4- and 1.5-ton models. The code number stood for body type.

Thus, the exhibit in our museum can be deciphered as a “two-axle off-road vehicle made in 1942 with an open-top pickup body, equipped with a winch.” In the USSR, however, the off-road vehicle had a very different name, Dodge Three Quarters, for its 750-kilogram payload capacity.

The index V was not mass-produced – only 4,641 units were assembled. The fate of the W index was completely different: Congress passed the Lend-Lease Act, the country entered World War II, and the Chrysler Corporation (which included Dodge) got a government contract, which literally goldened the concern!

43,224 Dodge T-223 three-axle units alone were built between 1943 and 1945! At the same time, the production volume of two-axle trucks was incomparable with the number of three-axle trucks. From 1942 to 1945 about 260 thousand off-road Dodge 4×4 trucks of various modifications were made. The most popular were the “carriers of arms”: WC-51 (without the winch) – 123 541 copies and WC-52 (with winch) – 59 114 copies. The total number of modifications exceeded 50 units, this is explained by the fact that such vehicles in huge quantities were supplied to Britain, the Soviet Union, China, as well as the army of Free France.

According to U.S. data, 24 902 Dodge trucks WC-51 and WC-52 with flatbed all-metal bodies and 300 pieces of three-axial artillery tractors WC-63 were delivered to our country. A large shipment of Dodges, under the Lend-Lease Treaty, was sent along the most risky “northern” route in World War II. This route began from British (mostly Scottish) and Icelandic ports to ice-free Murmansk. From July to December, 40% of all shipments took this route, and about 15% of shipments ended up at the bottom of the ocean.

The power unit had an index T-214 and was a 6-cylinder in-line carbureted gasoline engine with a lower valve tract and displacing 92 hp. The Dodge reached 60 miles per hour and had an average fuel consumption of 28.5 liters per 100 kilometers.

Drivers noted the vehicle’s excellent off-road performance in both summer and winter under any pavement and load level of the all-terrain vehicle. The controls were intuitive and easy to operate. The instrument panel was informative – speedometer with odometer, fuel gauge, ammeter, oil pressure gauge, speedometer, water temperature gauge in the cooling system. The gauges are backlit and well readable at any time of day.

But the open-body type did not please the driver and passenger – the wind blew heavily into the cabin and in wintertime exploitation of the car brought discomfort. The popularity of the vehicle waned in the postwar years – a role played by high fuel consumption of 29 liters per 100 kilometers and a weak payload capacity of the most common body type – open pickup. To replace the “Carrier of Armaments” came its logical civilian reincarnation in the form of a four-wheel-drive pickup Power Wagon.

It is also noteworthy that the car was the basis, or rather, received “almost a complete copy” in the face of GAZ-62 all-terrain vehicle, which was designed by engineers of the Gorky Car Plant in 1953, but the model never went into production, giving way to the legendary GAZ-66, which still has the influence of Dodge on the Soviet all-terrain vehicle.

Another interesting detail: the “lend-lease” brought so many cars to the USSR, that after the war one of the Soviet auto-repair plants specialized in the overhaul of the Dodge “Three quarters”, and the Leningrad Tire Factory has established the production of tires in size 9.00-16 with a special pattern “Ground Grip”.

*- Data based on the results of the measurement on the museum “Motorworld by V. Sheyanov”.