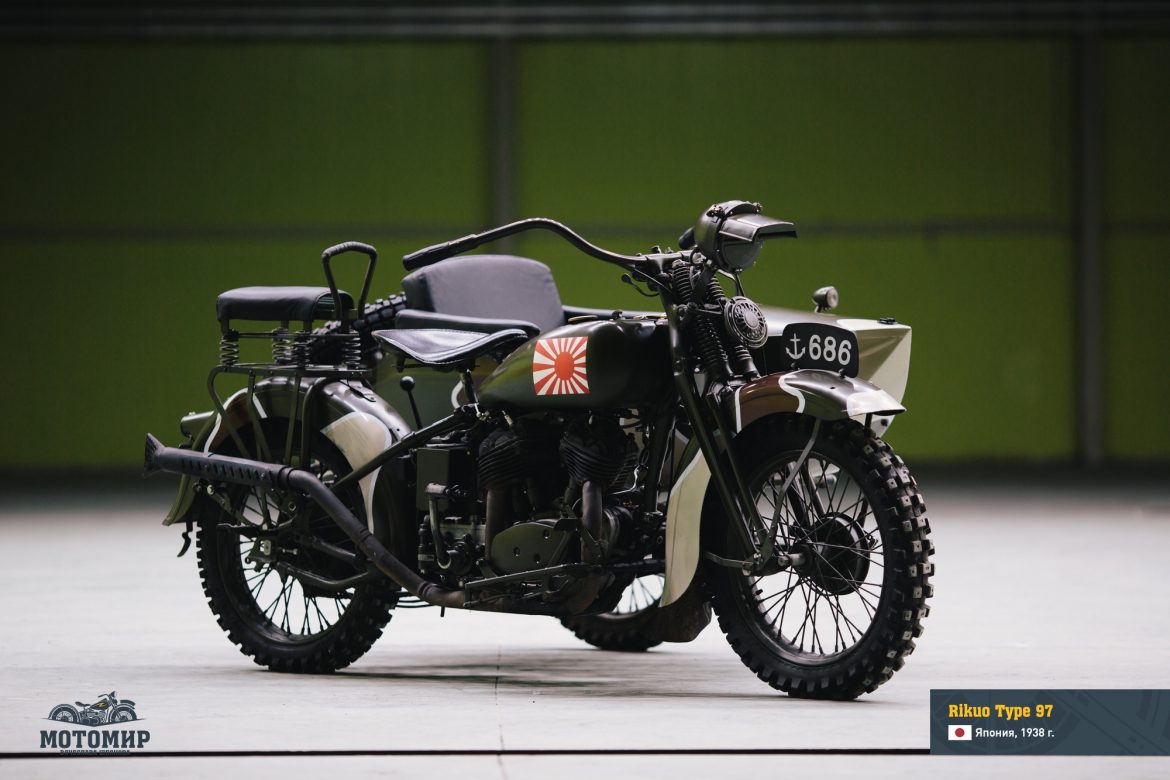 
Discussing World War II in today’s Japan is still a very sensitive topic. Try to imagine the mentality of the people who felt a “divine wind” blowing into their backs and who scorned Life itself, but still lost a war when the atom bomb stopped them… Thus, information on topics related to military history is very skimpy and it was mostly gained for the benefit of the general public by experts from the USA and Great Britain.

In the early 1930s, the Japanese government (that is, the Imperial Japanese Army) decided to drastically curtail the import of foreign technology and spare parts, especially for the needs of the defense industry (or “strategic industry”, as the Japanese preferred to call it). A national goal was set to create own military-industrial complex (historically, Japan used to solve the supply needs of its armed forces by importing whole armament systems). It was “suggested” to Sankyo Seiyaku, a company from Tokyo, that it should start developing the segment of motorized transportation means. (This company still exists today, but it produces pharmaceutical drugs.) At the time any requests by the military was, in practical terms, an order, so the Imperial Japanese Army eventually became the owners of a national version of the 1200-cc, L-head Harley-Davidson motorcycle assembled only of locally manufactured parts; it became the basis for multiple modifications of the motorcycles that were widely used by Japanese military until the end of the war.

In 1932 Sankyo Seiyaku sent its representative to Milwaukee, Wisconsin, with the aim of purchasing a production license and a plant for manufacturing the 1200-cc, VL-series motorcycle. The USA was in the grips of a strong economic crisis, so Harley-Davidson Motors Co. that was on the verge of bankruptcy happily accepted the Japanese offer.

In 1933 the plant equipment was demounted and shipped to Japan where it was re-assembled again in the city called Kita-Shinagawa, not far from Tokyo. Sankyo Seiyaku still exists there today producing pharmaceutical drugs. The funds for purchasing the plot of land, the plant, and for the wages of 100 workers were allocated by the Imperial Japanese Army, and the transaction was closed using an affiliated intermediary company registered in Tokyo. Several technical experts from Harley-Davidson Motors Co. went to Japan in order to put the plant into operation and start the production. Harley-Davidson Motors Co. provided all necessary manufacturing equipment, the initial shipment of parts as well as flow-charts for full-cycle production (let us note that engine production was also mastered). The license which Sankyo Seiyaku paid for was good for 4 years. 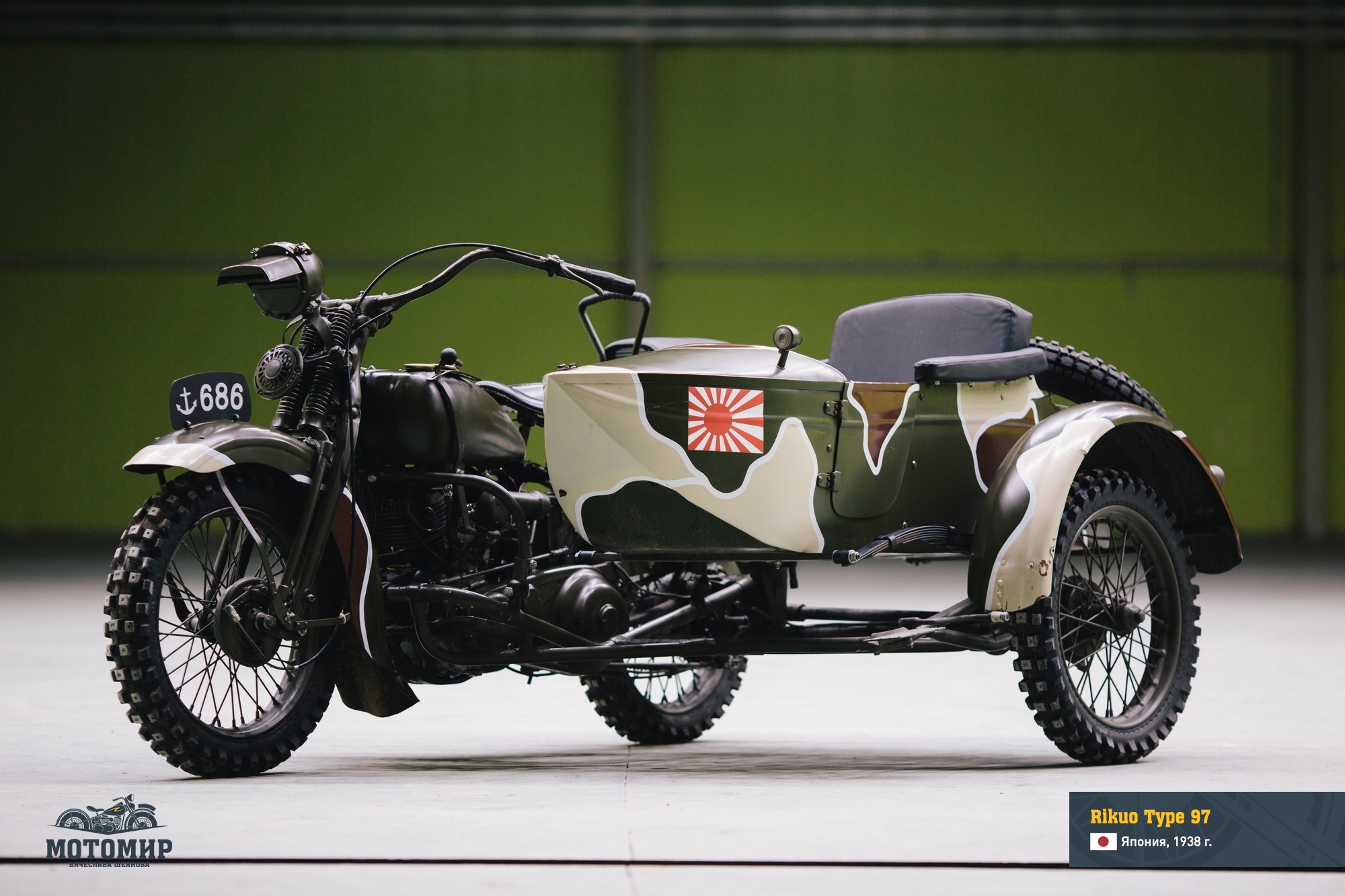 Local production was also launched, and soon these motorcycles were sold as a Japanese make: they got a brand name Rikuo (“King of the Road”) so that they would be more like local motorcycles. Rikuo motorcycles became so popular that in 1936 the decision was made to change the name of affiliated company Sankyo Seiyaku to Rikuo Nainenki KK (Rikuo Internal Engine Co., Inc.).

Parallel to the successful manufacturing of the civil motorcycle, the Rikuo Nainenki KK immediately developed its special, military version, using the 1200-cc model as its basis: this motorcycle was equipped with a sidecar (located on the left) having a drive gear to the sidecar wheel. 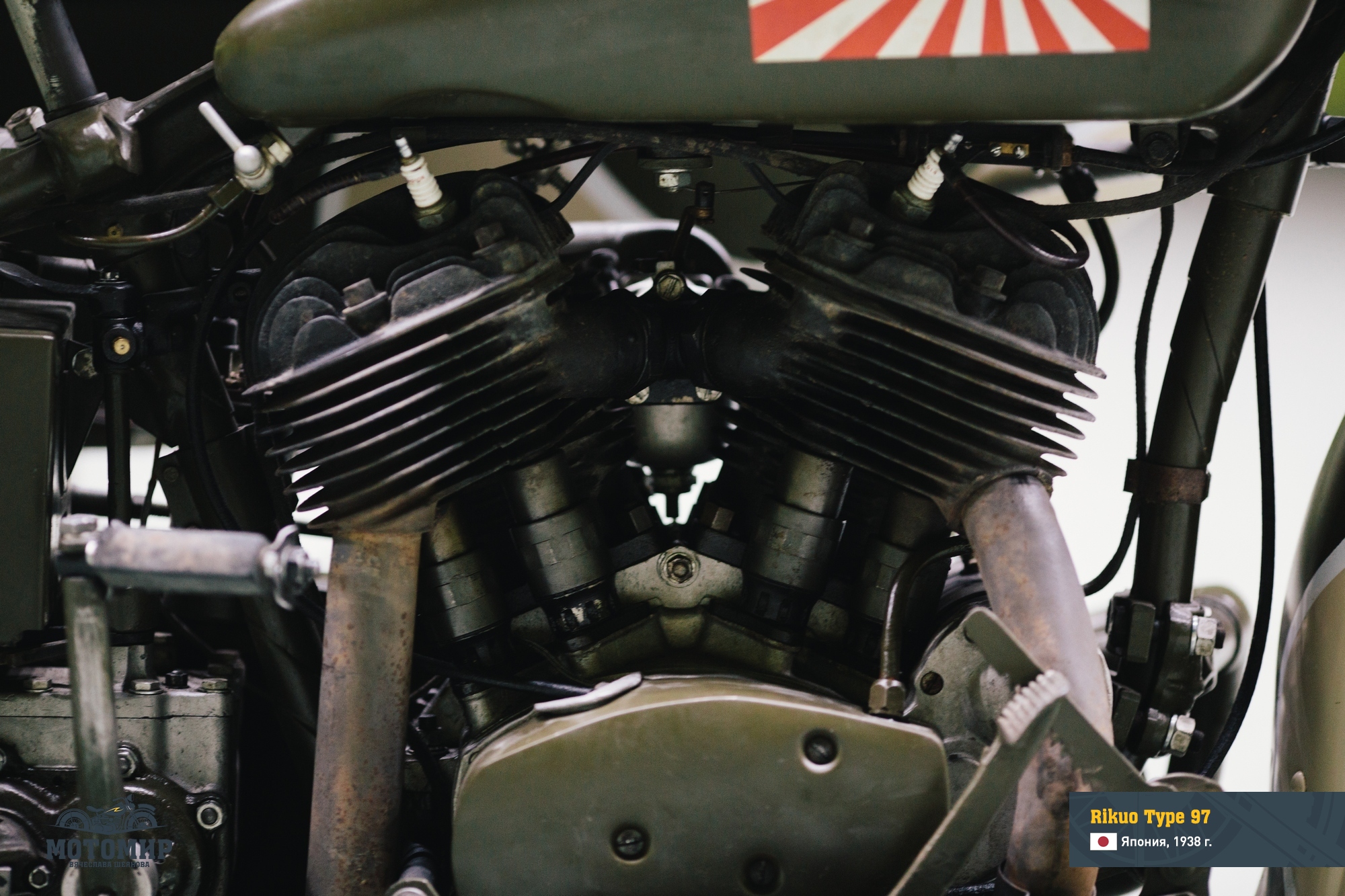 This was done keeping in mind that the main scene of military operations was in China and Manchuria, with their special, muddy soils (the Japanese started their expansion in these areas in 1931). The military motorcycle became known as Rikuo Type 97. This was a VL-series motorcycle featuring the twin-cylinder, V-shape, 1200-cc engine.

It became the main motorized transportation vehicle for the Imperial Japanese Army, and it was produced by several local companies right until the end of WWII (their versions had some variations, for example, in terms of the wheelbase length and detachable equipment). Orient Industries (today’s Mazda) was among these producer companies. Various sources agree that a total of about 18 thousand motorcycle units were produced. 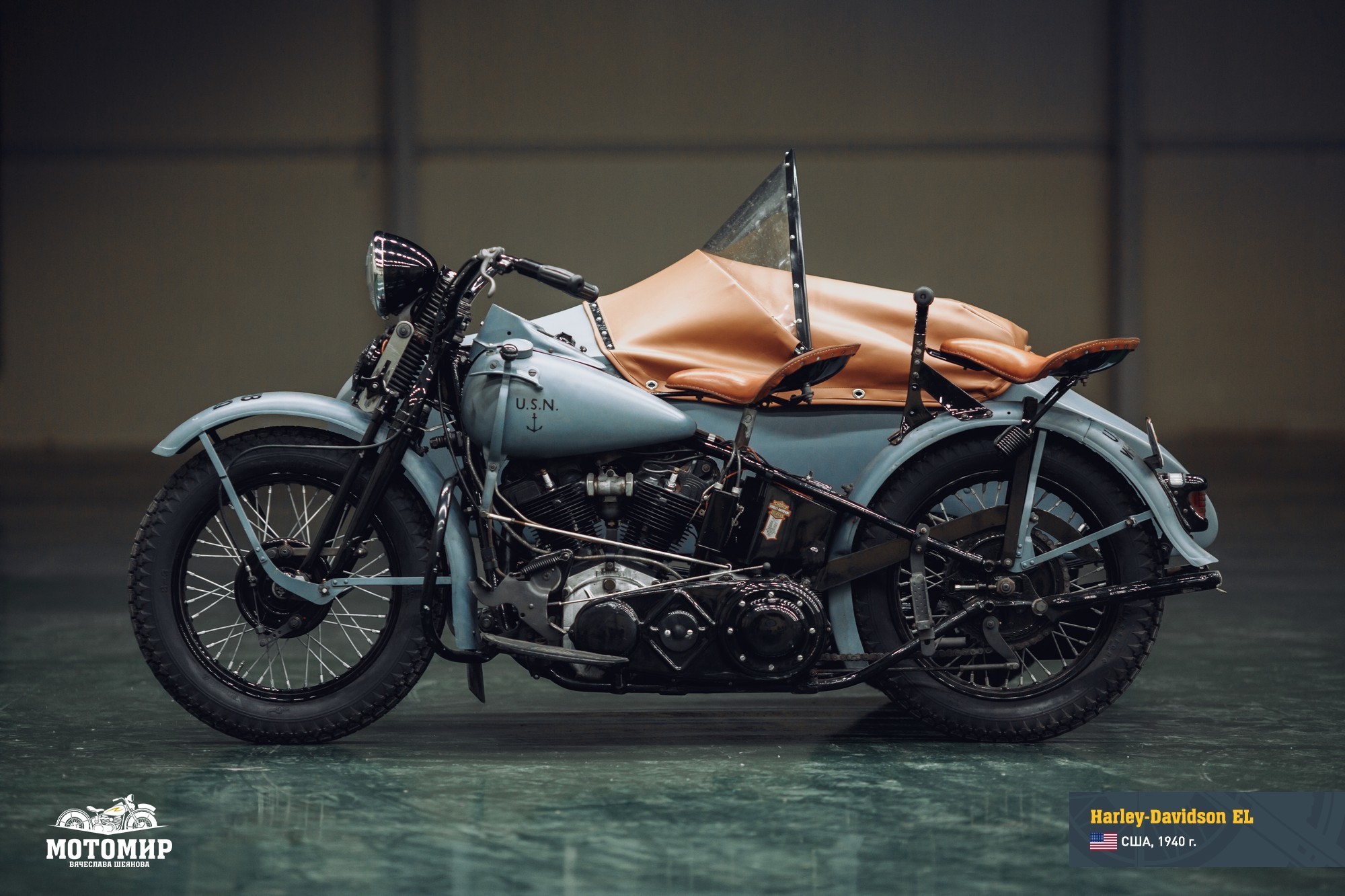 Let us go back to 1936. That year the license, which Harley-Davidson sold to the Japanese in 1932, expired, so the US company offered to sell a new license, for the assembly of new motorcycles, the EL Knucklehead (the name was reflecting a special shape of valve covers). The affiliated Rikuo Nainenki KK company declined this offer, however, probably following the general idea expressed by the saying “if it ain’t broke, don’t fix it”. Please note that by that time the Japanese occupied all of Manchuria and major parts of China, and they installed a regime there that today’s Chinese sources more and more refer to as “genocide”… Let us also remind ourselves that the military theory of the period considered the maneuvering capability to be of paramount importance for the armed forces, and it was secured by the degree of the mechanization of army units. Sometime later, the practice brilliantly confirmed this theory, after Wehrmacht’s blitzkrieg successes. The main transportation vehicle was the sidecar-motorcycle combination. In this sense the cooperation between Harley-Davidson and Rikuo Nainenki KK, transposed to today’s realities, may look like a deal, if Russia were to offer Iran today to provide a license for the SU-30 MKI, a heavy multirole fighter plain (“Flanker-H” in NATO code specification). And guess how much would oil prices rise in the case, if the Straight of Hormuz were to be successfully shut down after that? And also if a couple of aircraft carrier battle groups were destroyed in the Persian Gulf area…

Please find below the translation of a text by an American military historian commenting on the fact that, in practical terms, under the conditions of that period, the deal was, in fact, a case of military technology transfer for the benefit of the army of an aggressor state. 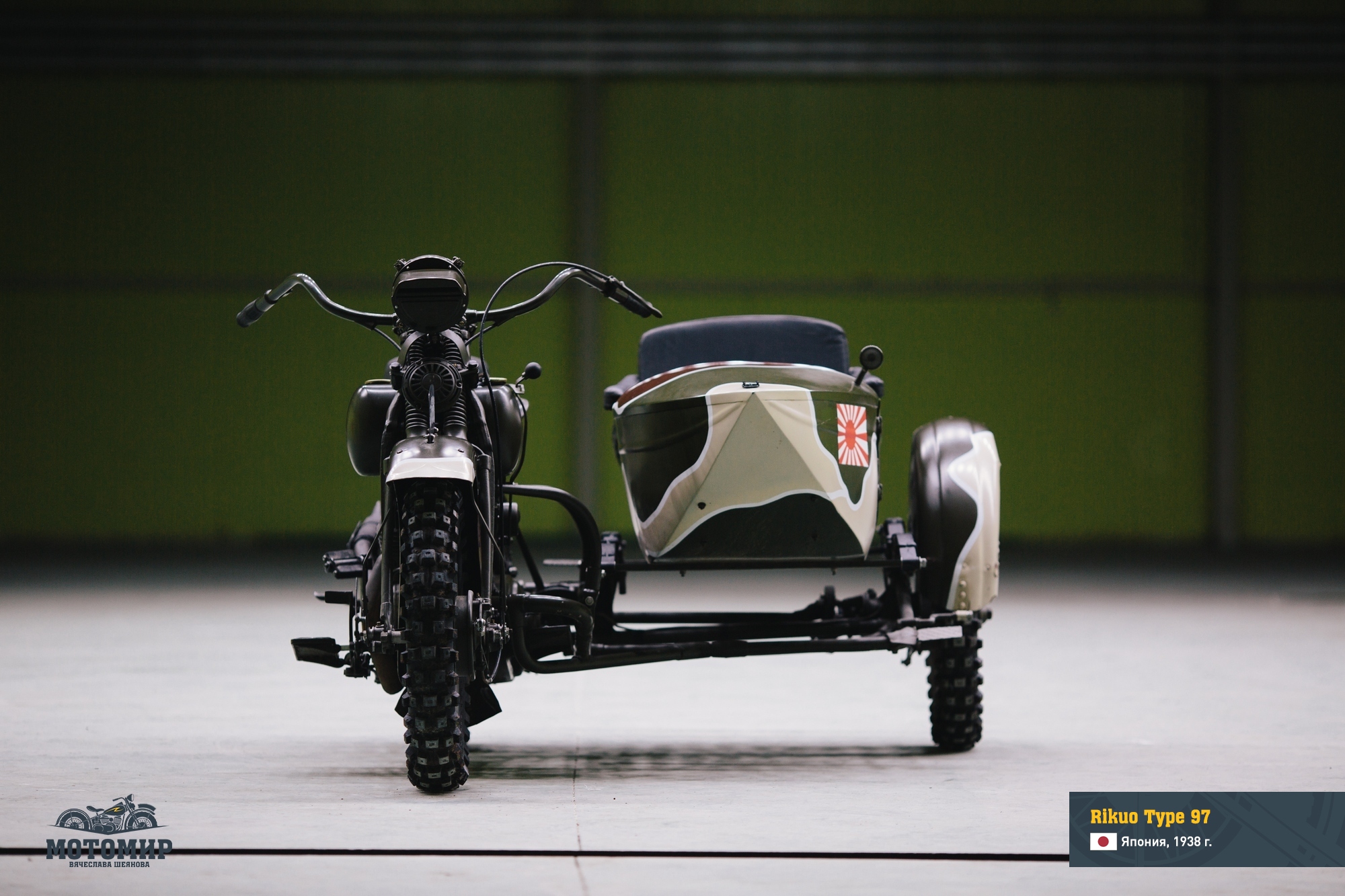 “Harley-Davidson’s decision to sell the factory to Japan in 1932, the year after Japan’s invasion of Manchuria, was not seen as especially controversial then. Sankyo Seiyaku was a civilian firm, and the fact that the money came from the IJA was not disclosed by Sankyo. Also, the deal was brokered by a proxy company, so it wasn’t direct support of Japan’s military or Japan’s foreign policy by Harley-Davidson. The 1200-cc motorcycle was successfully sold to civilians as well as to the army, both in Japan and in Manchuria, and was used throughout the Japanese empire until 1945. Today, Sankyo refuses to discuss the subject, but I’ve read their published Japanese histories, which can be found in major research university libraries. They’re not proud of the episode, especially their sale of the machine in occupied areas, so they keep quiet about it. As far as research is concerned, I don’t think these episodes have to be celebrated in order to be studied.”

In 1947 the company started manufacturing the 750-cc version of the motorcycle, but the demand for a rather expensive motorcycle in the country that was ravaged by war was rather negligible, so in 1949 its production was terminated. The rights to the brand name and to the manufacturing equipment were purchased by Showa Koukuke, an aviation company, and in 1951 they started manufacturing two models: R (746 cc, 15 h.p.) and VFD (1207 cc, 30 h.p.). They were not in any technical sense different from pre-war Harley-Davidson machines: twin-cylinder, V-shape, L-head, 3-step gearbox as a separate unit, parallelogram-linked front forks and rigid suspension of the rear wheel. Amazingly, these motorcycles found ardent fans not only among the Japanese police but also among the US military in the occupation forces: they saw these motorcycles as “close relatives”.

In 1953 the company started the production, under the name RQ, of a drastically improved version of the 750-cc model. It was rigged with a highly efficient 22 h.p. engine and the telescopic front fork (while the rigid rear-wheel suspension was left unchanged). At the same time, the company released its own Model A that was created, obviously, under the influence of German BMW motorcycles: its one-cylinder, OHV engine (345 cc, 16 h.p.) was installed in the longitudinal direction on the duplex frame, with a telescopic fork in front and pendulum suspension at the rear wheel driven by a cardan shaft. Later, in 1958, a 247-cc version of this same machine was presented, under the FB index. At about the same time they started installing a 4-speed gearbox at the 750-cc motorcycle (RT-II model). In 1960 an experimental RX model was created, with the OHV, twin-cylinder engine (747 cc), and pendulum suspension of the rear wheel. However, a very small scale of production did not justify the development costs of this machine, and in 1962 the Rikuo brand disappeared from the scene.