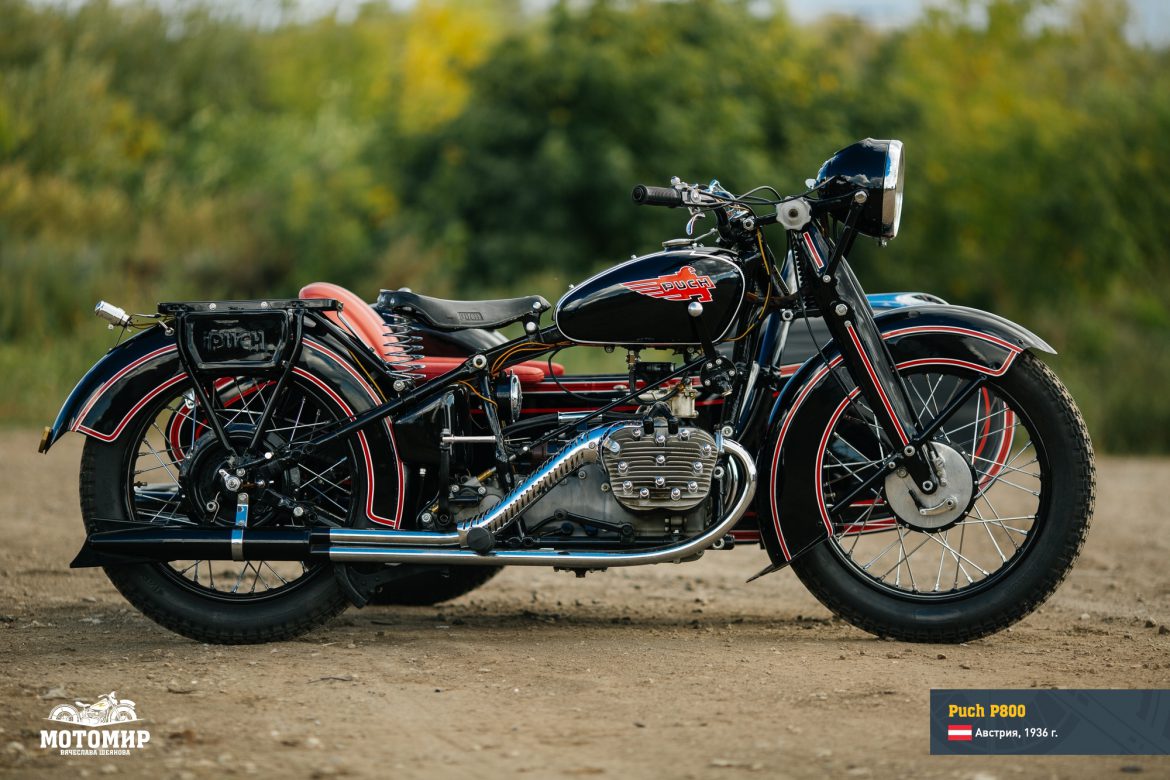 When we see the elegant Puch P800, we should thank Giovanni Marcellino for this beauty. In the early 20’s he somehow managed to revive the dying Puch factory. Giovanni came up with a genius idea of producing two-cylinder engines with a single combustion chamber. Thanks to these engines the Puch company became the largest motor manufacturer in prewar Austria. 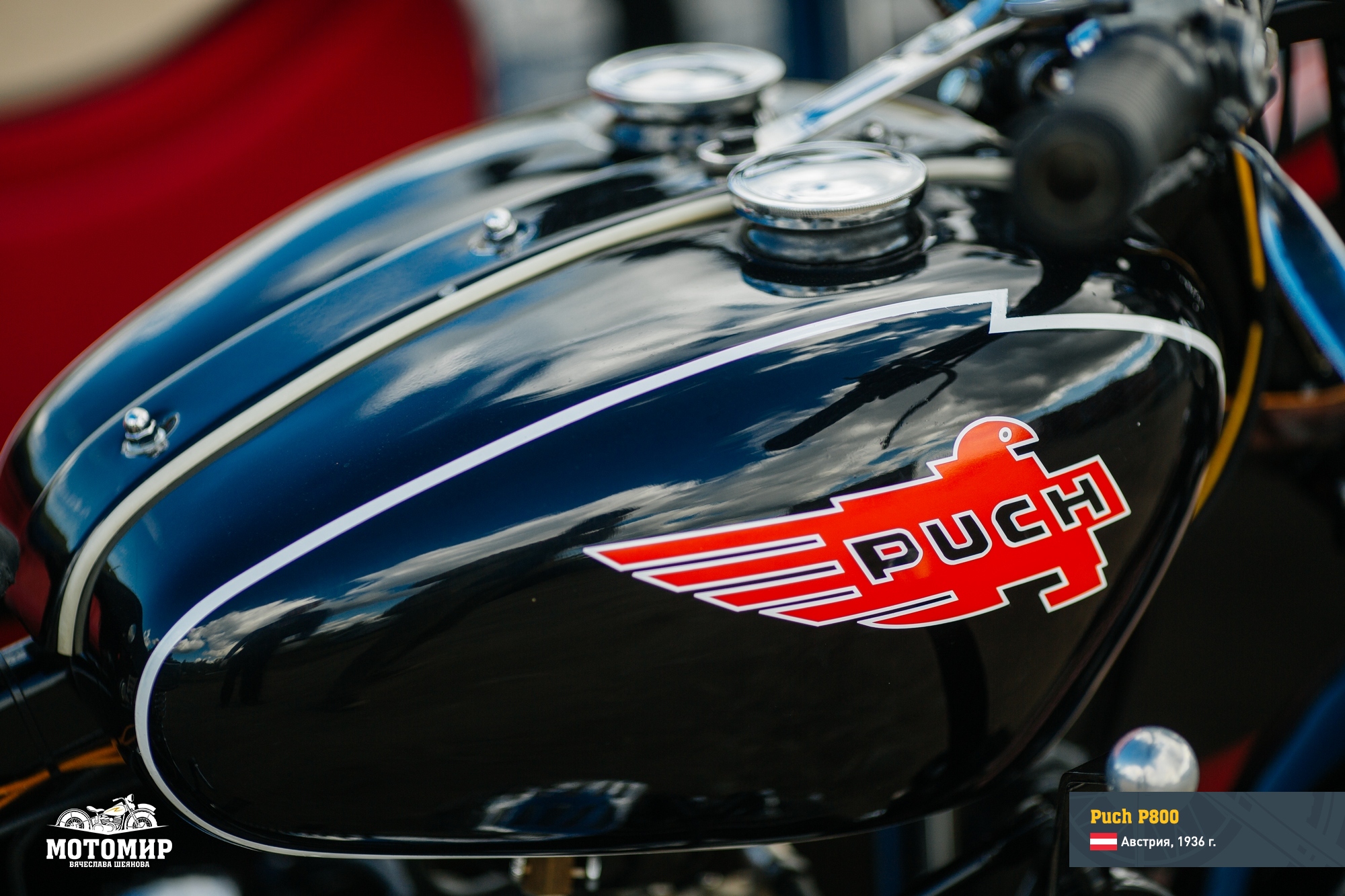 It wasn’t long till Marcelino designed and launched into production new models of motorcycles, which immediately drew the attention of buyers. On the racing track, there was no equal to the new flagship models of the company. The Puch motorcycles were selling well abroad and the brand’s popularity was steadily growing. Since 1925, the company has taken the leading position in Austria: in three years its motorcycle with a small 175cc engine was sold in quantities of more than 3500 copies. The Puch with a 220cc engine reached the same number of sold motorcycles in Germany alone (only during 1929) and in Austria, more than 7000 Puch 220cc motorcycles were sold. These machines had everything that customers were looking for, like great torque, durable engine, and very unusual exhaust, with a light pleasant sound.

The Puch motorcycles were the best choice for rides in the city and daily use. The most popular models were S4 (250cc) and 220 (220cc). They maintained high levels of sales even after the company’s management decided to close the racing department for economic reasons. In the early 1930s, the dealerships of the company began to open all over the country, and many motorcycle clubs were organized by fans of the brand.

However, those who were unsatisfied by the limited engine power (4.5 hp) of the Puch 220, or those who wanted to buy a motorcycle with a sidecar, preferred English or American vehicles, or simply chose BMW motorcycles.

It was obvious that the model range lacked a motorcycle with a large engine volume. Marcelino didn’t want to spend time on development, so he decided to use the ready English engines. In spring 1928, the Puch 500S model with the JAP engine appeared on the market. However, such measures lead to one major disadvantage. The four-stroke single-cylinder engine (11 hp) with side valves was very expensive, so the price of the model increased to 2,500 shillings. The first Puch 500Z with 250 cc two-stroke four-cylinder engine did not go into production until three years later.

Talking about the brand’s flagship, we have to mention one historical fact. In 1928, the Puch company merged with the car manufacturer Austro-Daimler, AG and six years later it also merged with the Steyr-Werke, AG. After that union, there was hope that the local authorities would use Austrian vehicles, and the company would get large contracts.

Orders were mostly based on armored vehicles and off-road trucks, but the management of Steyr-Daimler-Puch, AG did not want to leave the motorcycle business. At first, it seemed that the army was interested in Austrian motorcycles, but in 1927 the command refused to supply the troops with Puch 220 due to its low power. The engine volume of 500 cc was the minimum that the army would agree on. Also, motorcycles with foreign engines were not considered, due to difficulties in maintenance and lack of spare parts. The overall sales of Puch 220 were not as expected and in 1928, after 300 units made, the production was stopped.

As the bikes produced in Austria were not powerful enough, the army again gave preference to BMW motorcycles. The situation changed when the Puch company produced the 500Z model in 1931. In less than a year, Puch designed, launched, and tested a model suitable for all military requirements, but the army command still wasn’t ready for a contract. In 1934, it finally became clear that the test team didn’t like the idea of a rear-wheel clutch, which was a distinctive feature of Puch motorcycles.

The Steyer-Puch leaders didn’t give up the hope to sign a contract with the state. With that in mind, they developed and assembled a prototype of a fundamentally different motorcycle with a 750cc flat engine. The prototype was sent to army officials but the answer was still negative. So Marcelino decided to give it one last chance and announced the development of a new four-cylinder 800cc engine.

The new bike was ready in three months, it was not like anything the company had done before. The head of the Army Research Department, Otto Ischpold, dedicated the whole summer to the Puch P800 trials and his final response was positive, but one of the higher officials didn’t like the new bike and at the end, the army signed a contract for the supply of a lighter and cheaper two-stroke Puch 500Z with a sidecar.

Despite the failure of the military contract, a new Puch P800 motorcycle was presented to the public at the Vienna Spring Fair in March 1936. That’s how the bike was described in an advertising brochure; “The heavy four-cylinder four-stroke machine, just as demanded from the most fastidious rider as a high-performance ride.” 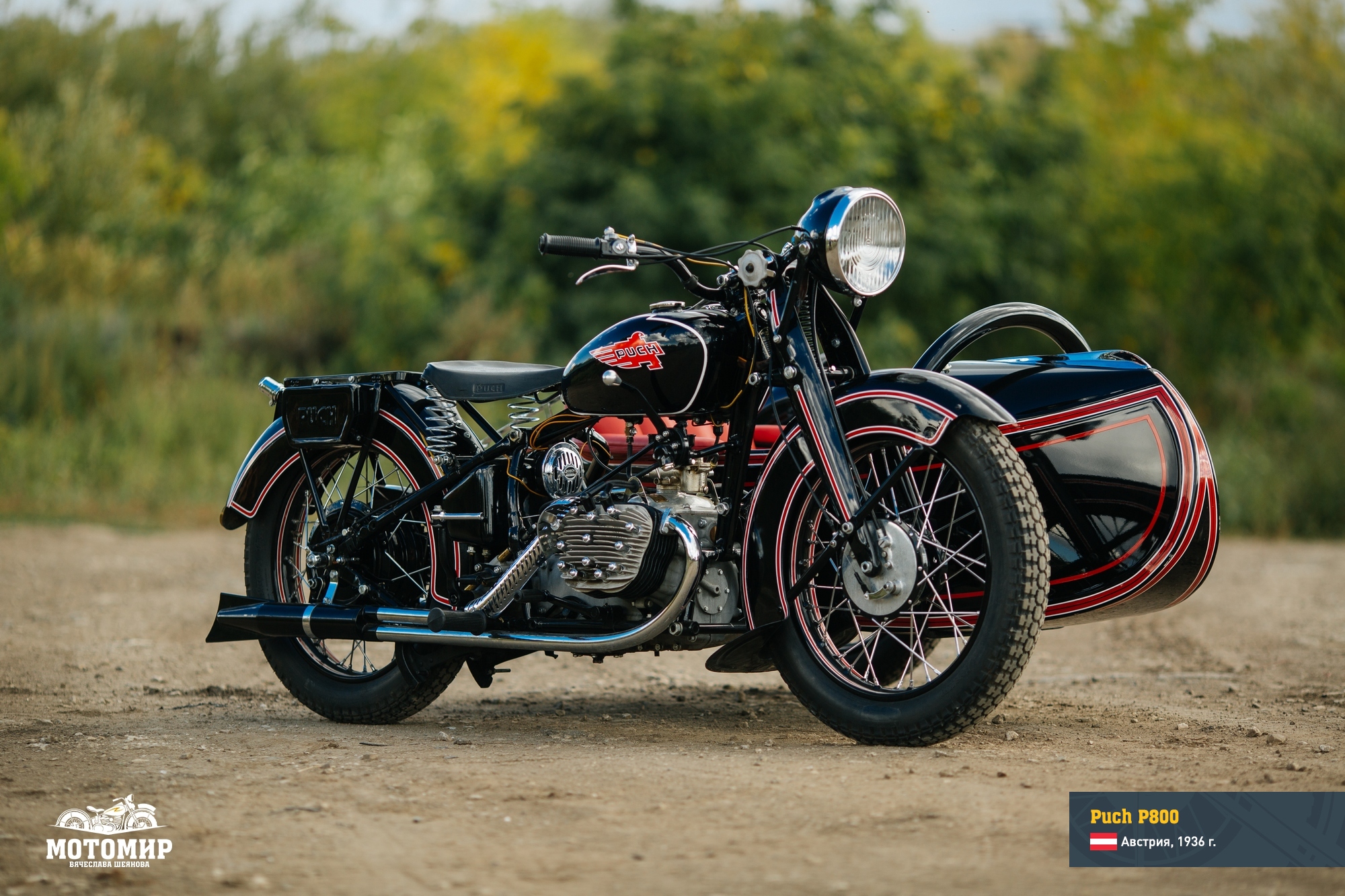 The German Das Motorrad magazine, which was popular in Berlin before the war, published a detailed report on the successful army trials of the motorcycle. The grey-colored variation was also favoured by the police department, which ordered more than a hundred units in the solo version.

However, despite excellent feedback and successful testing, potential buyers, which should have included Austrian officials, wealthy citizens, and businessmen, were not in a hurry to buy a new motorcycle and its price, which was only 2780 shillings, wasn’t the reason. Motorcycles were cheaper than foreign counterparts with comparable power, such as BMW R 12 and Zundapp K800, to say nothing of Harley-Davidson with absurdly high import taxes. 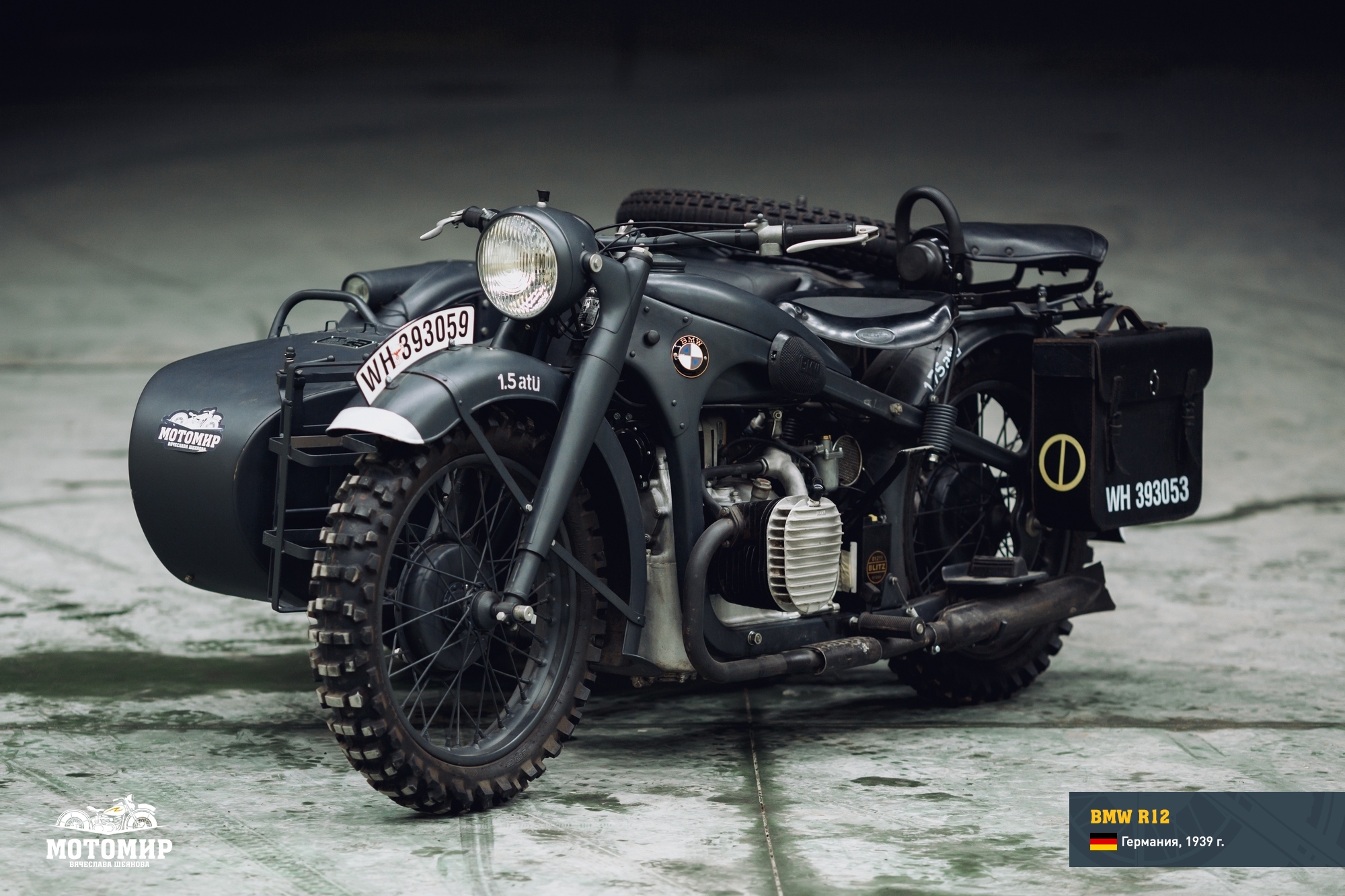 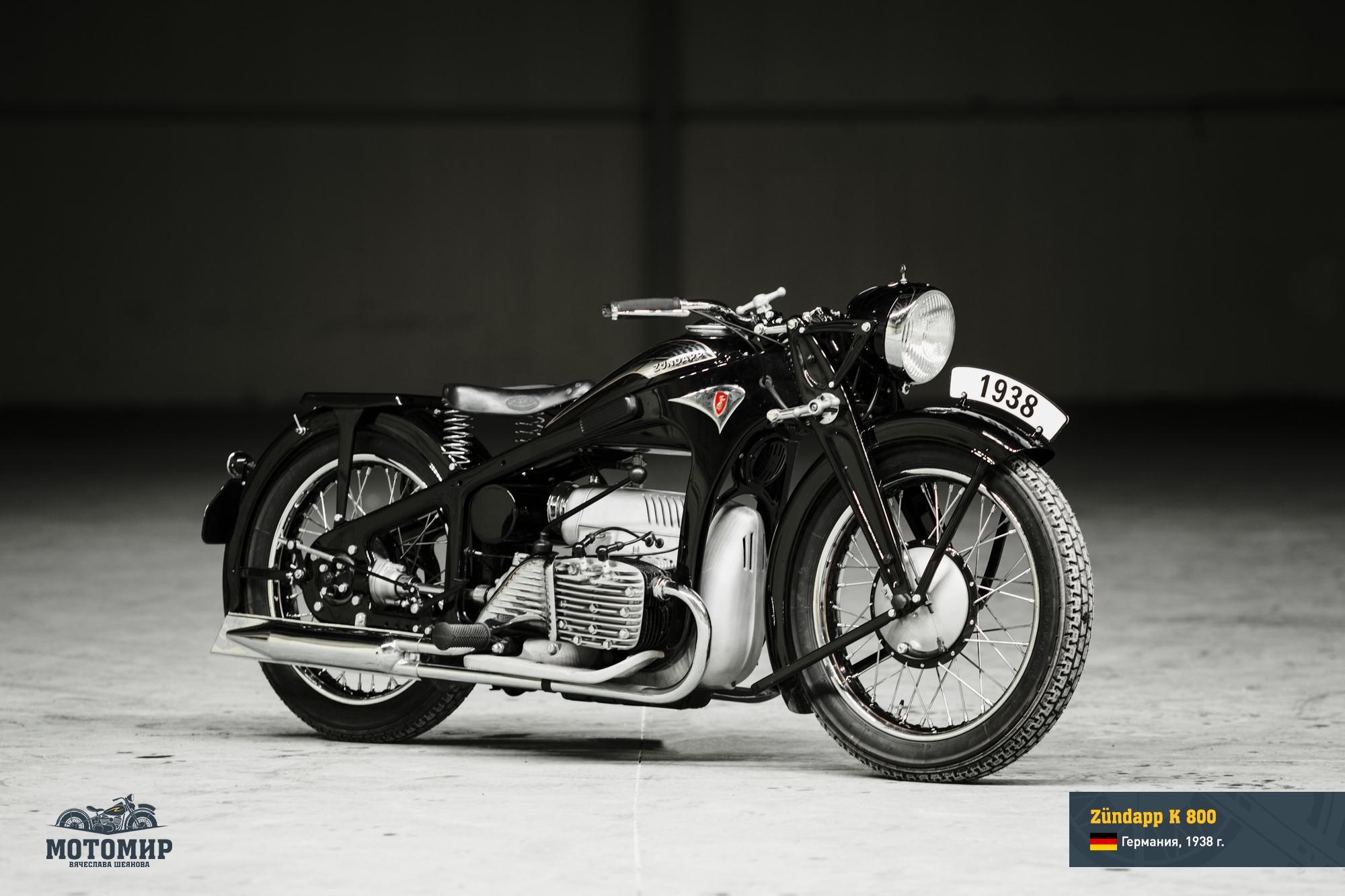 It seemed that the Austrians should choose a cheaper motorcycle of their own production, but instead, people were confused. Giovanni’s fame as a talented developer of two-cylinder engines played a bad joke on him. Nobody could believe that a man who had been engaged in two-stroke engines all his life, suddenly decided to change the path and produce a motorcycle with an engine of a different kind. The new four-stroke flat engine turned out to be quite reliable and had no serious flaws. All the changes that were made to the design were minor: the speedometer and gas tank changed its shape in 1937, a drain plug on the sump of the crankcase and gasoline filter were added, and soon after the start of production the chain valve mechanism was changed, it became two-row and adjustable. In late 1937, the original Puch carburetor was replaced by the imported Solex CV carburetor. 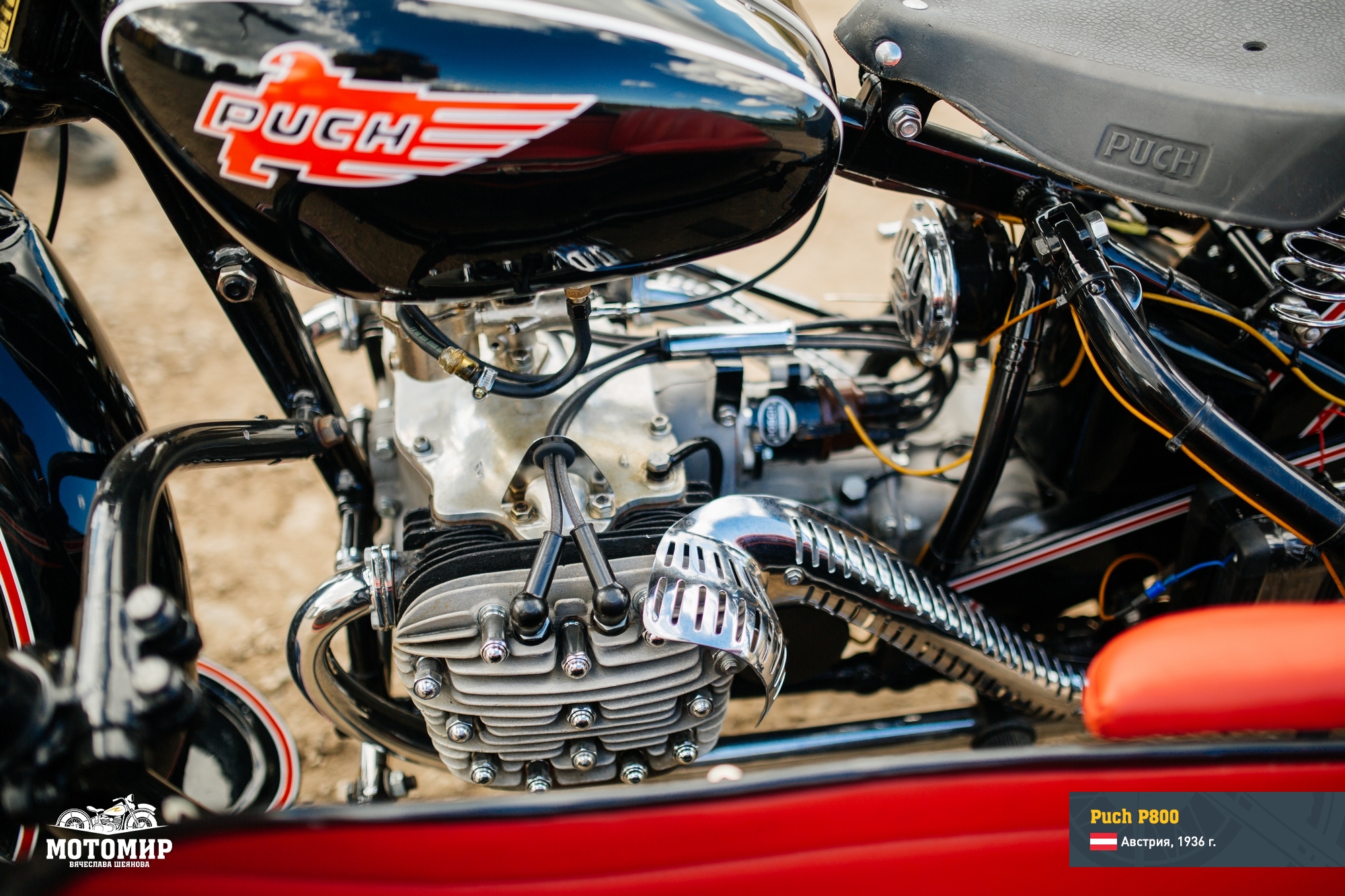 Alfred Oswald, head of engineering at Puch company, used all the possibilities of his team to outshine the famous competitors, such as BMW and Zundapp. The four-cylinder engine with side valves looked a little unusual but had all the features of a flat engine: 4 pistons moved towards each other, and the angle between the connecting rods was 180 degrees. The interesting solution was that each pair of cylinders has changed its inclination by 16 degrees relative to the horizon, the total angle between the cylinders was 148 degrees. This allowed to raise the bottom edge of the cylinder block by 80 mm, and thus increase the ground clearance. 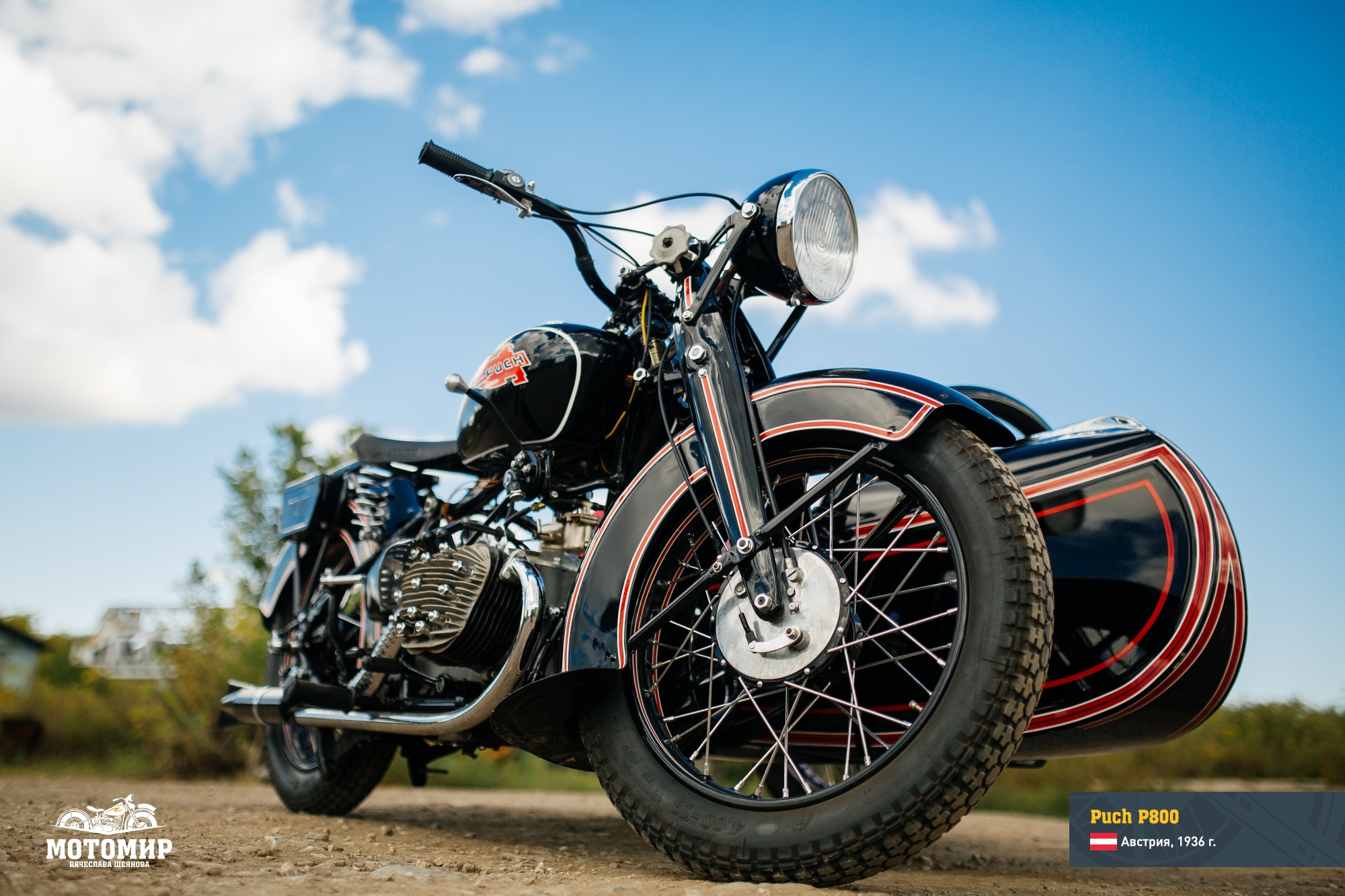 The crankshaft itself rotated in three roller bearings, and the crankcase was vertically divided into two parts. Behind that part of the engine, which we usually call the crankcase, there was a casting, which housed the crankshaft shank. The shank was connected to the camshaft by a two-row chain, the oil pump was driven by a worm gear and the generator by a bevel gear.

The four-speed gearbox was rigidly attached to the engine and transferred power to the rear wheel through a chain. A complex two-stage clutch was installed in the rear wheel hub, which was controlled by a lever on the handlebar via cable. 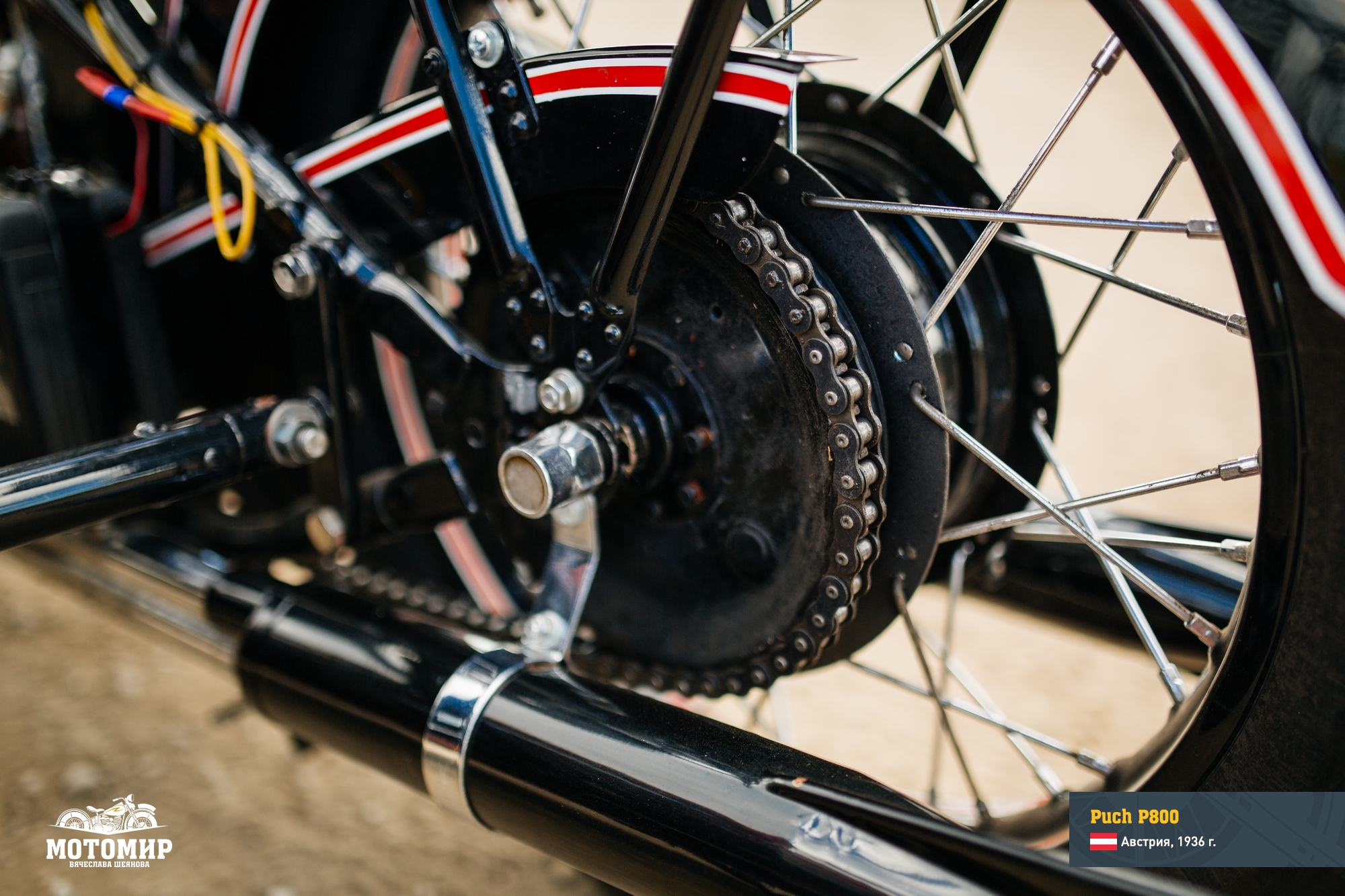 The carburetor was located on top of the engine, just behind the valve cover; the channels, which supplied fuel and air mixture, were part of the valve cover. The “distributor” was driven by a camshaft and was located in the rear upper part of the engine. The lubricating system with a dry sump required a separate oil tank, it was installed in the back of the motorcycle frame. The filling neck was directed to the right or left, depending on whether the bike was used with or without a sidecar. 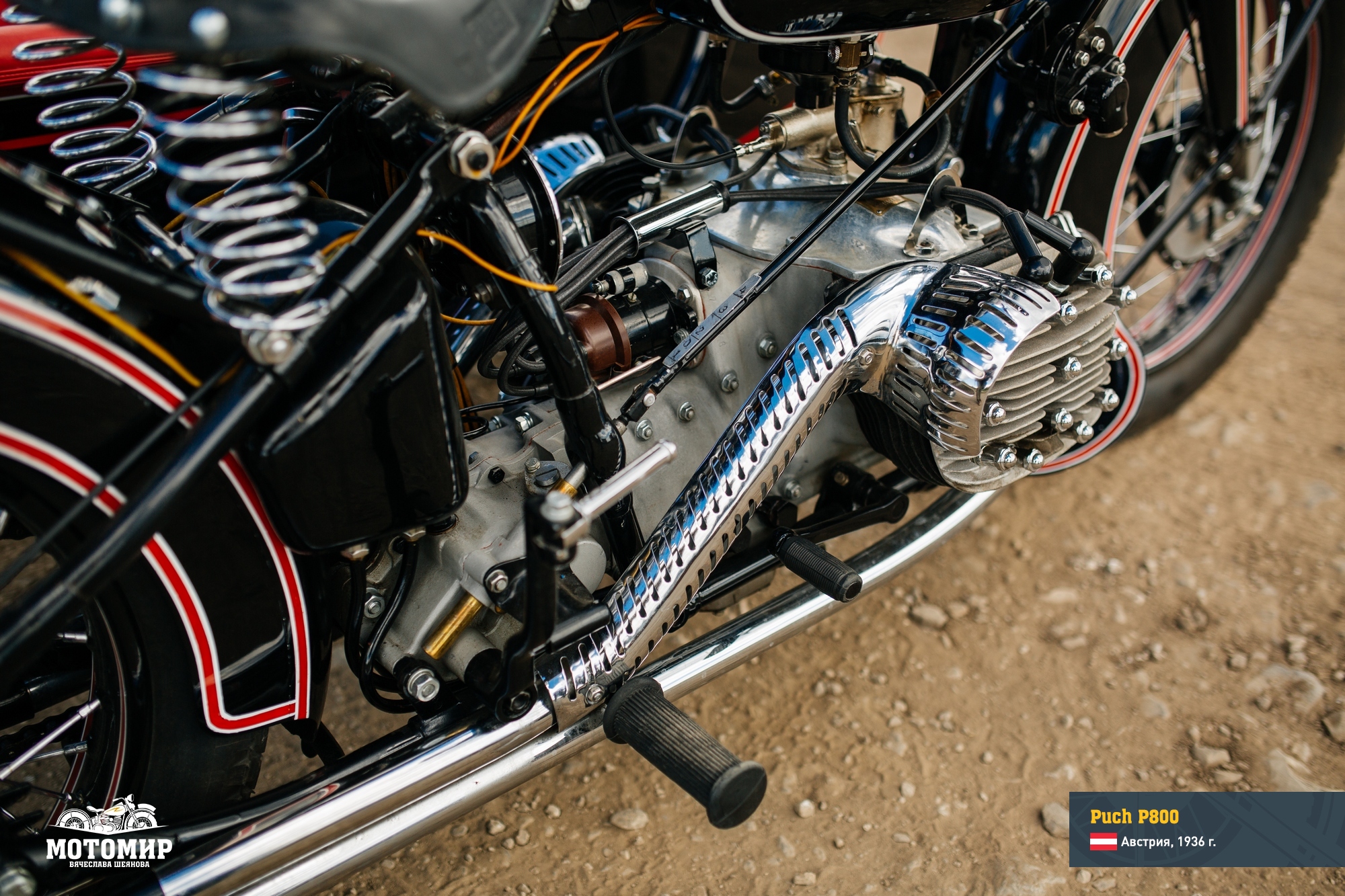 After the annexation of Austria by the Nazis, it became clear that no new orders would follow. The Puch company concentrated on the production of small motorcycles with two-stroke engines. The Austrian army became part of the Wehrmacht, and the police department, as well as the entire economy, was now controlled by the German war machine. So, in 1938, production of the P800 was stopped, by that time only 550 copies of this model were produced.

As a result of the Anschluss, most motorcycles were confiscated by the German army and then destroyed in the battles of World War II. Nowadays, no more than 90 Puch P800 motorcycles remain in the world, so this model is considered one of the rarest.