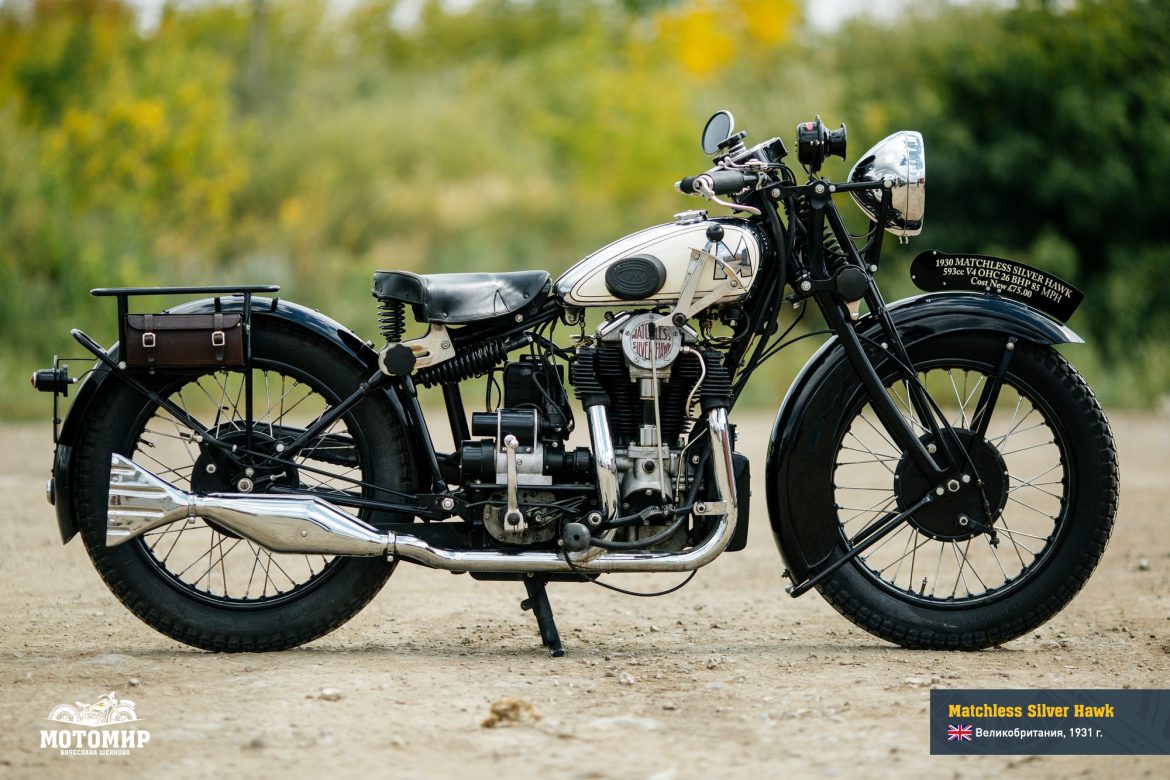 Matchless is one of the oldest brands of motorcycles. It was founded by Henry Herbert Collier in 1878.

Like many other motorcycle manufacturers, Collier began with the production of bicycles and his company was quite successful. He also had three sons, Harry, Charles, and Burt Jr., and from an early age, they inherited their father’s engineering and business talent, as well as a passion for racing. In 1898, the eldest sons, Harry and Charles, began working for their father’s company. At the same time, the Matchless company began experimenting with the installation of internal combustion engines on its bikes.

The first serial Matchless motorcycle was produced in 1901. It had a single-cylinder MMC engine, which was copying the design of the French de Dion, and a belt drive to the rear wheel.

In 1905, a motorcycle with a two-cylinder V-shaped JAP engine was presented. This motorcycle was one of the first in the world to receive not only the front lever suspension but also a pendulum rear suspension.

In 1899, Charles won his first race. It was followed by a whole series of victories and records. By 1905, a motorcycle racer Charles Collier, already well-known in Britain, was chosen to represent his country in the race for the International Cup. That time the luck wasn’t on his side, his motorcycle with the above-mentioned JAP engine dropped out of the race because of a broken connecting rod. However, Harry, who also participated in the competition, took an honorable third place.

The next year, the race for the International Cup was held in Austria. The Collier brothers were participating in it again, but this time they didn’t win anything. After the competition, on a way home, between Charles and Harry Collier, their father Herbert, and the manager of the British team, Marquis Mausili de Saint Marc, a curious conversation took place. They discussed the requirements for motorcycles which are allowed to participate in the International Cup competition. The Collier brothers insisted that the required weight limit for motorcycles (50 kg) was absurd and not safe because if you’d make the bike lighter the reliability of the whole mechanism would reduce dramatically, and on top of that they have to function at very high speed. In addition, the sports bikes turned out to be completely different from the standard market analogs. So it was decided to organize a new competition to which all standard road motorcycles were allowed. Soon enough the idea came to life, the race was called Tourist Trophy. In the first year of competition, this race was won by Charles Collier.

Meanwhile, the Matchless company regularly released new models, which were equipped with engines from such manufacturers as MAG, Blackburn, and JAP.

Finally, in 1923, the model L/3 was released with the company’s own 350 cc engine, followed by the models L/R, M, L/4 and others. The Matchless company was doing well, but in 1925 Herbert Henry Collier died. His sons, however, have proven themselves to be good engineers, and it was obvious that they would be able to continue their father’s business.

In December 1929, at an exhibition in the famous Olympia Exposition Center, Matchless presented a sensational new model, Silver Arrow, designed by Charles Collier. The bike had a two-cylinder V-shaped 397 cc engine with such a small angle between the cylinders (18°) that the block and head of the cylinders were made by single castings. Externally, the engine gave the impression of being inline. The camshaft was perpendicular to the crankshaft rotation axis, so the bottom valves were vertical. The rear wheel had a pendulum suspension: two cylindrical springs and a friction damper were mounted under the seat. The dashboard was above the handlebar.

The Silver Arrow was a good motorcycle but had some flaws as frequent engine overheating, gearbox failure and the motor gave out only 16 hp, which allowed to accelerate only up to 95 km/h. However, the bike was quiet and smooth, for which he was nicknamed the ‘whispering wonder’, but sales were still pretty low. 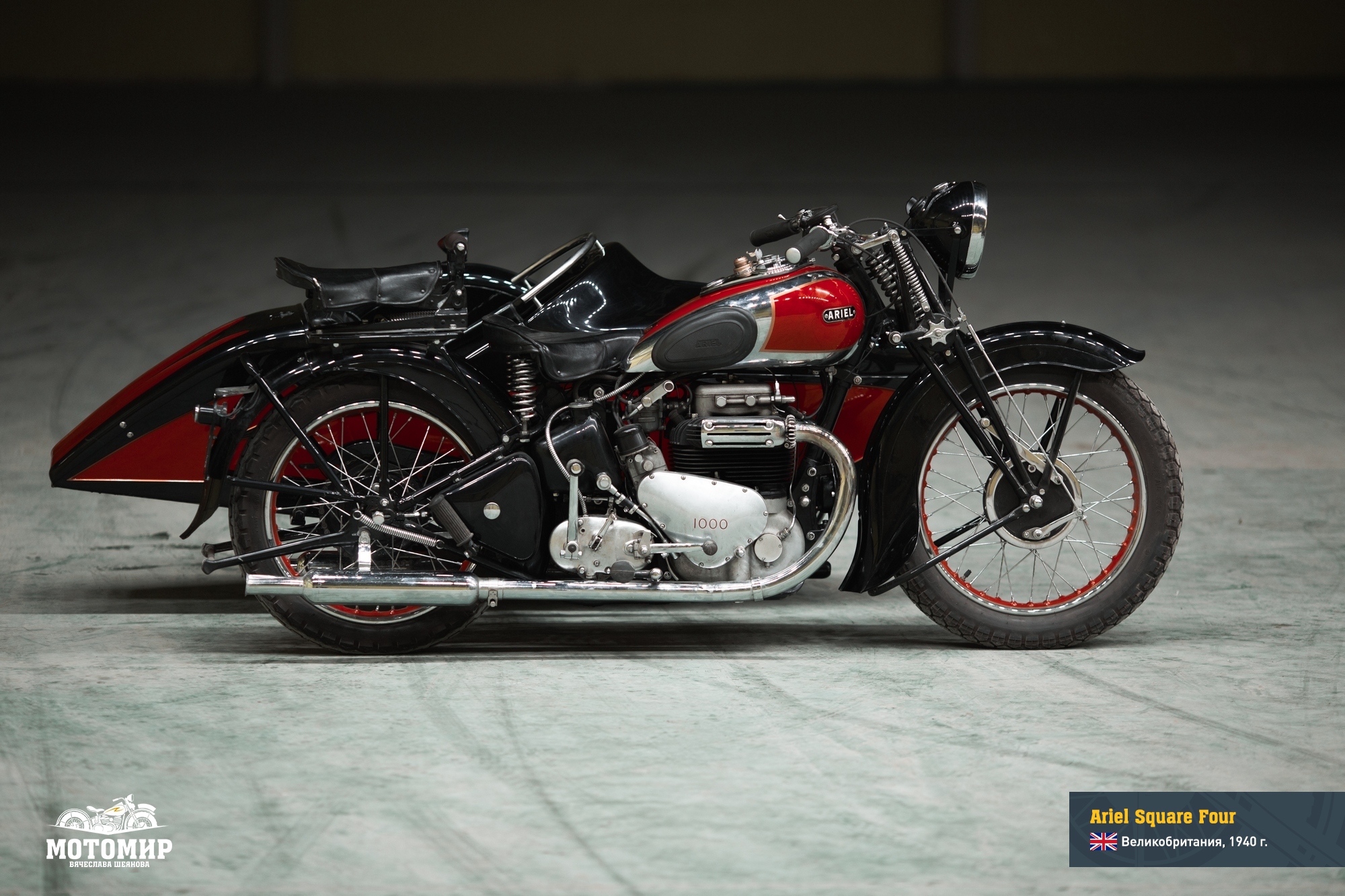 The company needed some fresh ideas, so the initiative was taken by Bert Collier Jr., who by that time had already worked in the company together with his older brothers. He decided to refine the bike and as a result, the engine volume was increased to 592 cc, and power was increased to 36 hp. The camshaft was driven by a single shaft (unlike its main competitor, Ariel Square Four, where two shafts were used), all four cylinders were powered by a single Amal carburetor. The three-speed gearbox was replaced by a four-speed gearbox. The top speed limit was raised to 137 km/h.

This new motorcycle was named Silver Hawk, it was the world’s first V4 motorcycle with a dry sump. The engine of this model was very unusual. The thing is that at that time all engines with four-cylinder always had an inline design, which increased the wheelbase of the motorcycle, making it quite cumbersome. The V-shaped four-cylinder engine was a solution to this problem. Thanks to the power of the four cylinders and the compactness of the motor, the Matchless Silver Hawk had a sporty look, which was exactly what Collier had in mind. Another advantage of this model was the soft rear suspension. 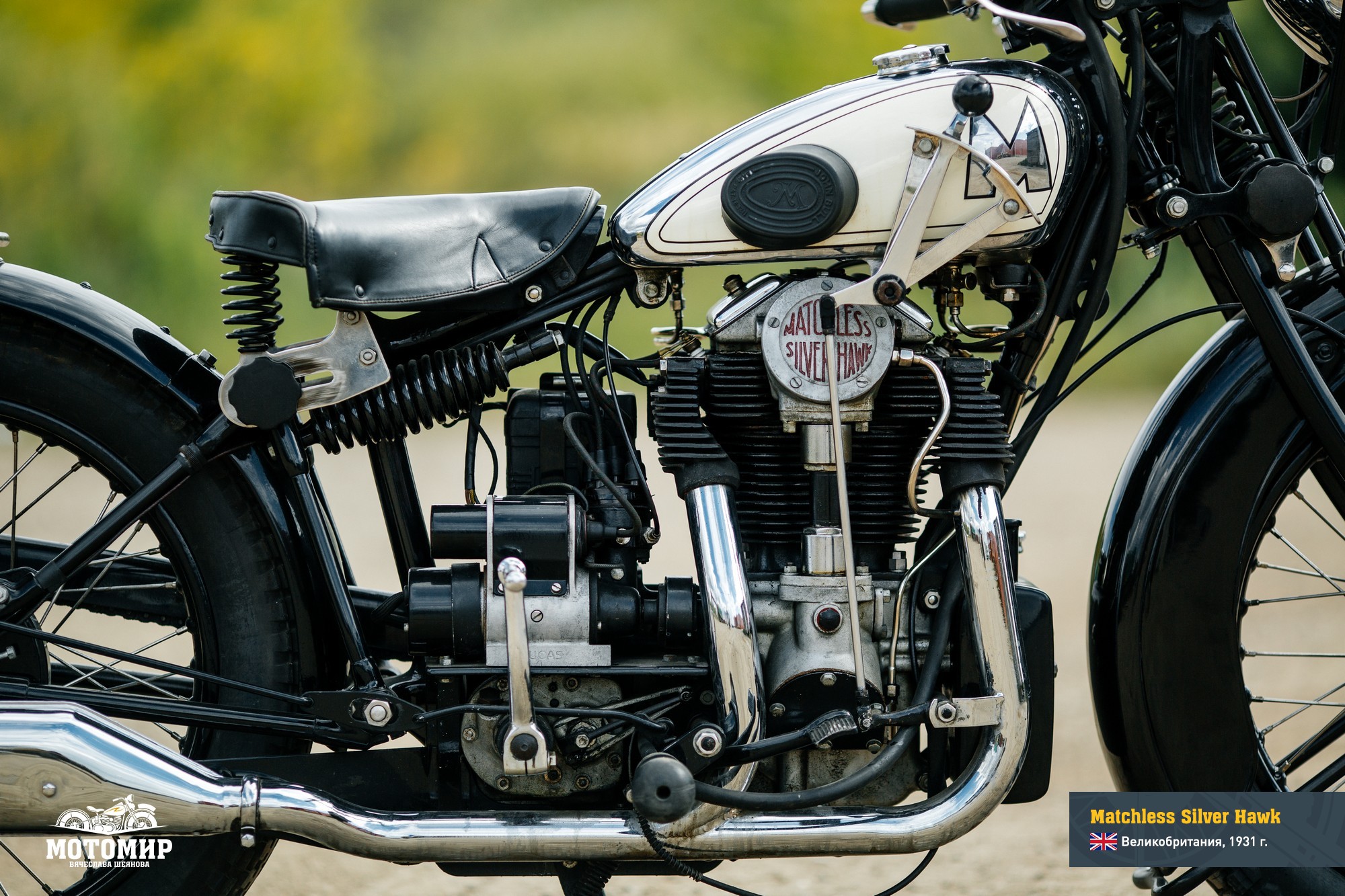 The first presentation of the Matchless Silver Hawk took place in London on November 10, 1930 at the Olympia Exposition Center, where it amazed everyone with its innovative design. Considering the fact that two-cylinder motorcycles were very rare in England of the 30s, it becomes clear that any motorcycle that had more than one cylinder was quite prestigious, and a four-cylinder bike was a real luxury. That is why Silver Hawk became the flagship of the company. 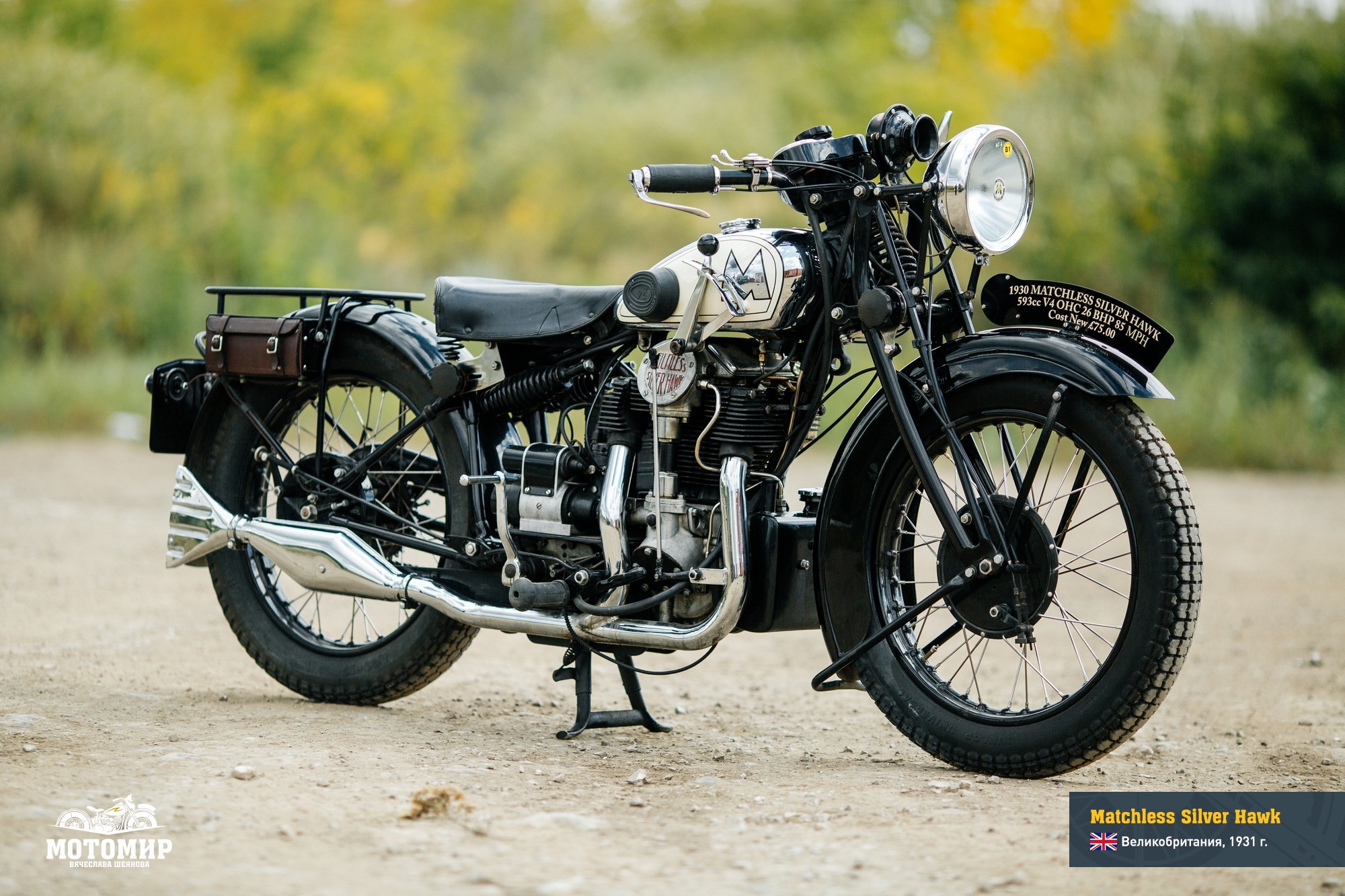 In 1931, the serial production of the Silver Hawk began, but it was not the right time for luxury motorcycles. The complexity of its design and, as a result, high price led to low sales. All motorcycles were custom made, that’s why Silver Hawk is one of the rarest luxury motorcycles in the world. One of these ‘treasures’ has become part of our collection. 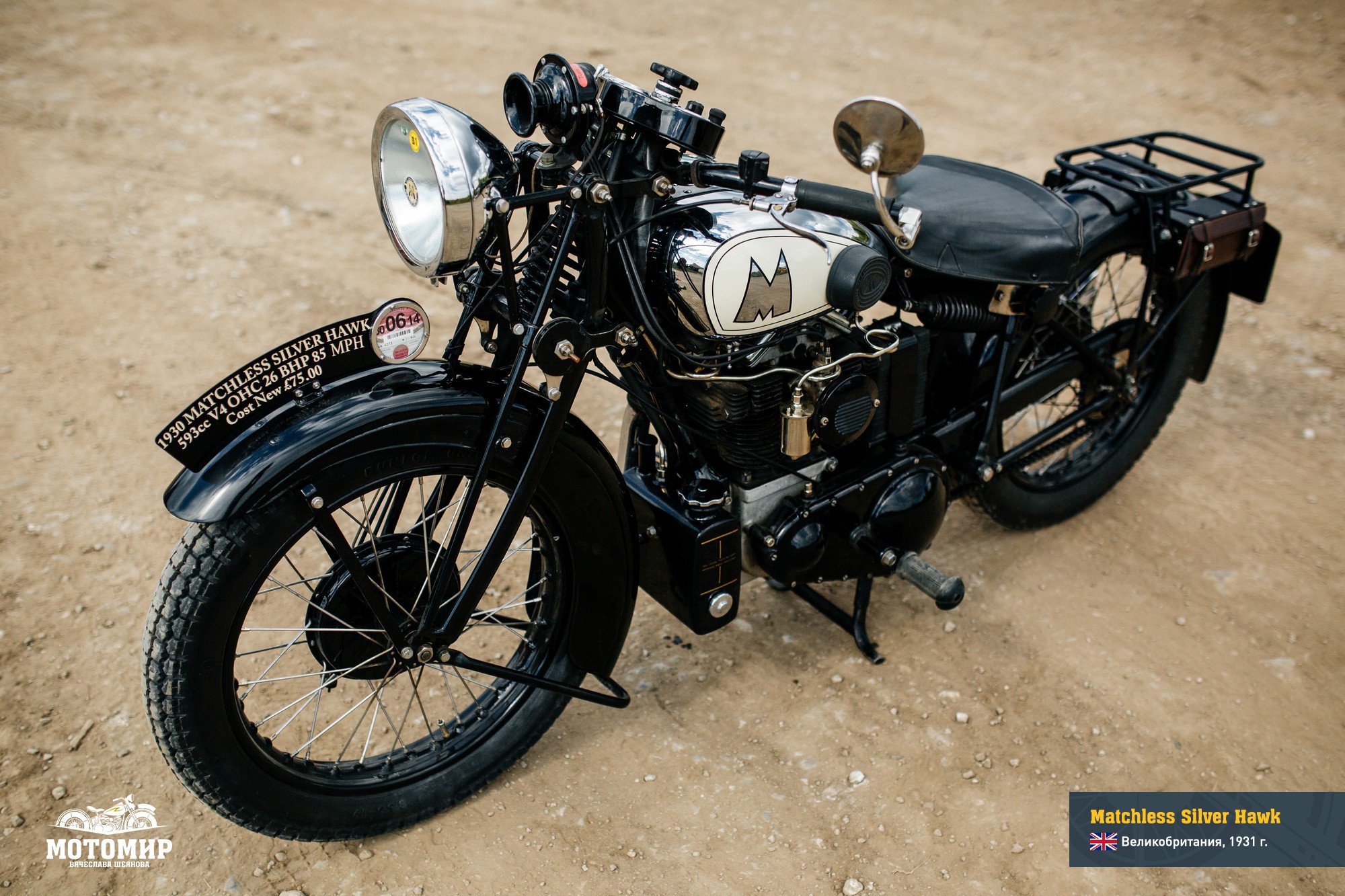 The previous owner of the motorcycle, Pat Gill, a well-known British collector, and the motorcycle expert, gave the bike to the Motorworld by V. Sheyanov collection. Pat bought the Silver Hawk in the mid-1950s and was the third owner of the bike. When he gave the motorcycle to us it was in excellent condition, but at the time of purchase, the bike looked like a pile of scrap metal. However, Pat noted that most of the parts were in good condition, so he decided to fix it. It took 10 years to find all the missing parts and another 3 years to restore the motorcycle.

The result has exceeded all expectations. For many years Pat Gill with his Matchless Silver Hawk participated in all kinds of races and competitions, winning numerous prizes. At the British RealClassic Show, in 2011, the bike took 2nd place in the category “Best motorcycle before 1950”, and in 2012 the bike won in the category “Best British motorcycle”. In 2013, during the FIVA Retro Motor Rally in Latvia, the motorcycle was awarded by the Finnish Auto Moto Retro magazine as “The most technically interesting model”.