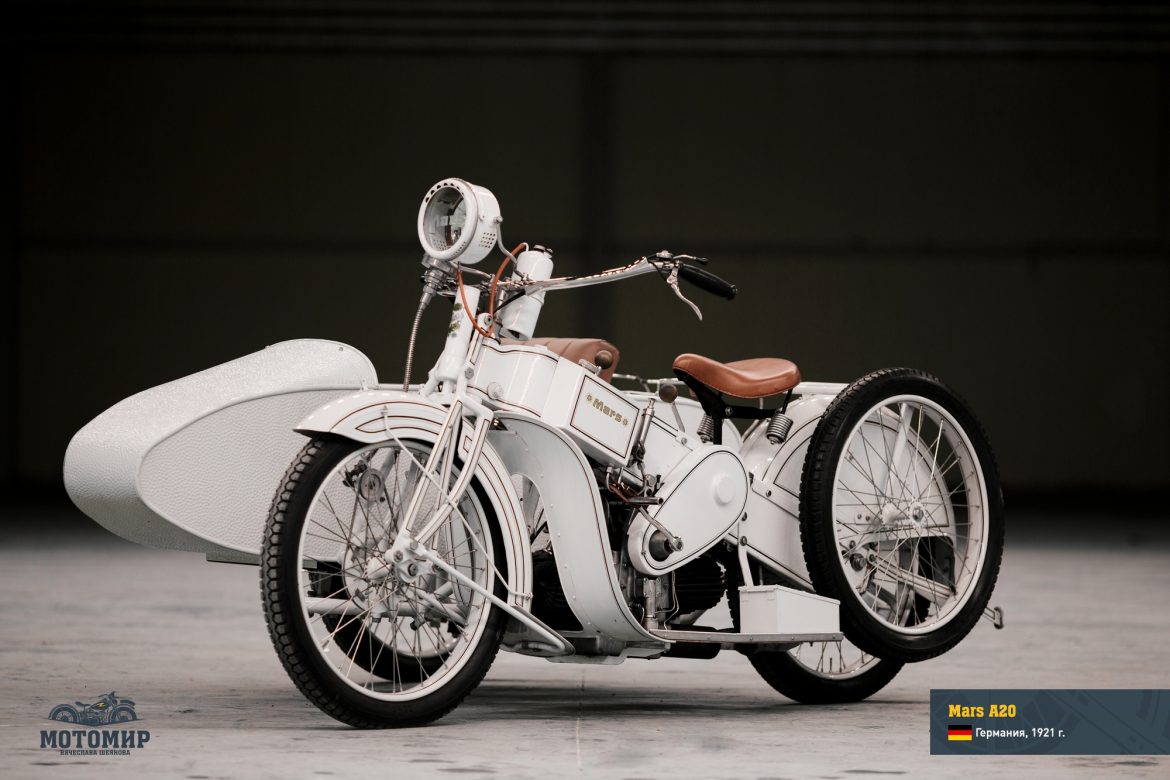 In the history of the motorcycle industry, the Mars brand is firmly connected to the famous A20 model, which was nicknamed ‘White Mars’ due to the common white color of these machines. The motorcycle was also available in red and green, but the minimalistic white is most associated with the model. The Mars A20 is a legend among German motorcycles, so no wonder that even a postage stamp was issued in 1983 in honor of the machine. The most interesting feature of this model was its engine, manufactured by Maybach, having a very large engine capacity for its time and an unusual design. 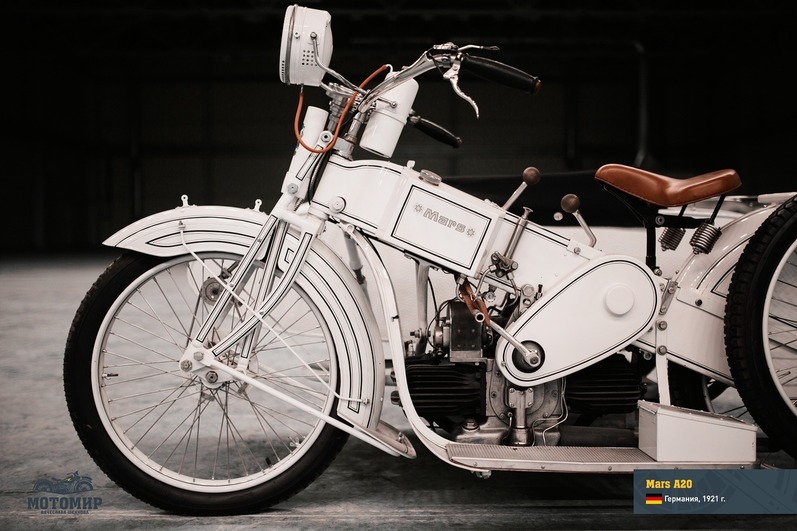 First released in 1920, the Mars A20 motorcycle (also called Reisemaschine, i.e. a ‘vehicle for traveling’) was a focus of the latest original technical ideas of the time. First of all, it didn’t have a frame in the common sense of the word. The base of this machine consisted of a box-section frame, which housed the gas and oil tanks as well as a storage box. An ohv, twin-cylinder engine (956cc and 7.3 hp) was longitudinally positioned under the frame, having an external flywheel that also played the role of the fan for the forced air cooling system. 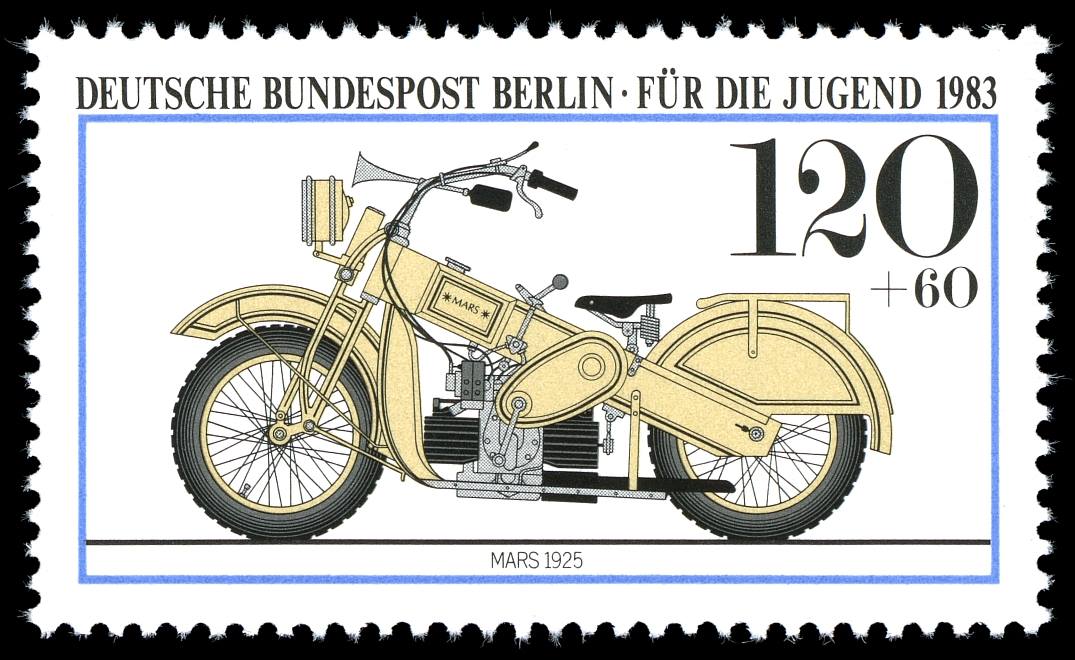 Next to it was a Pallas carburetor with an upcoming flow of the combustion mixture, and the intake of the heated air was provided via the long junction pipe from the rear cylinder. The Mars engine got a very tricky gas distribution mechanism: a camshaft located in the upper part of the assembly, driven from the crankshaft by two spur pinions, directly affected the four complex-shaped crossbeams, each of which controlled its own valve.

The engine together with the box-type frame formed a single power unit, which included a two-speed gearbox crankcase. The motorcycle’s transmission deserves special attention: there were two drums with inner friction pads on the cross shaft. Each drum had its own chain connected to the rear wheel, so there were two chain sprockets at the rear. When choosing gear, one of the drums was decelerated and the torque was transmitted to the rear wheel. Belt brake gears were located over the lead drums: one with manual and other with foot control. 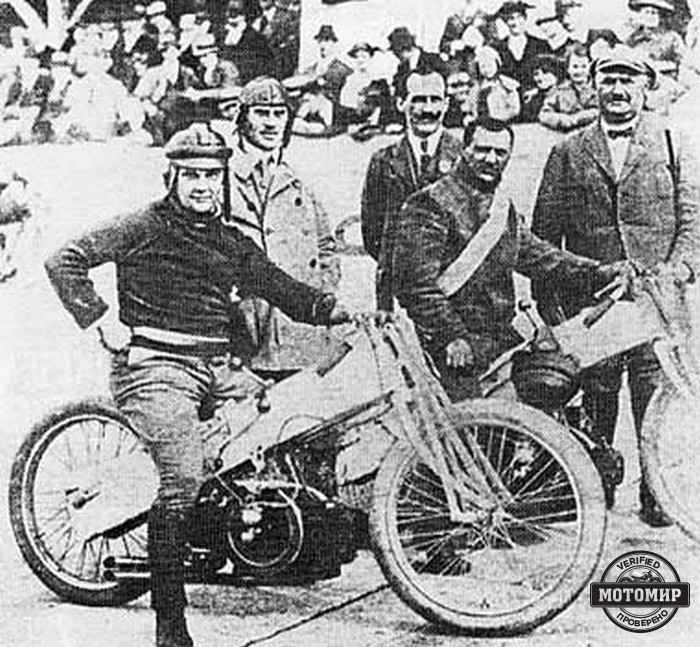 Mars A20 was also a sports model. Factory drivers Ernest Schulz and Heinz Wilhelm are here on White Mars motorcycles when they took the first and second prizes during Bavarian championship in 1921.

The engine was started with a hand crank (like in cars) using a special actuator. The wheels were made interchangeable since their flanges did not have braking mechanisms. Moreover, even in a single version, Mars A20 could carry a spare wheel on the right side. A short lever front fork of a very complex design completed the look of the motorcycle.

White Mars was manufactured until 1932, continuously modernizing. In total, just over a thousand copies were produced.