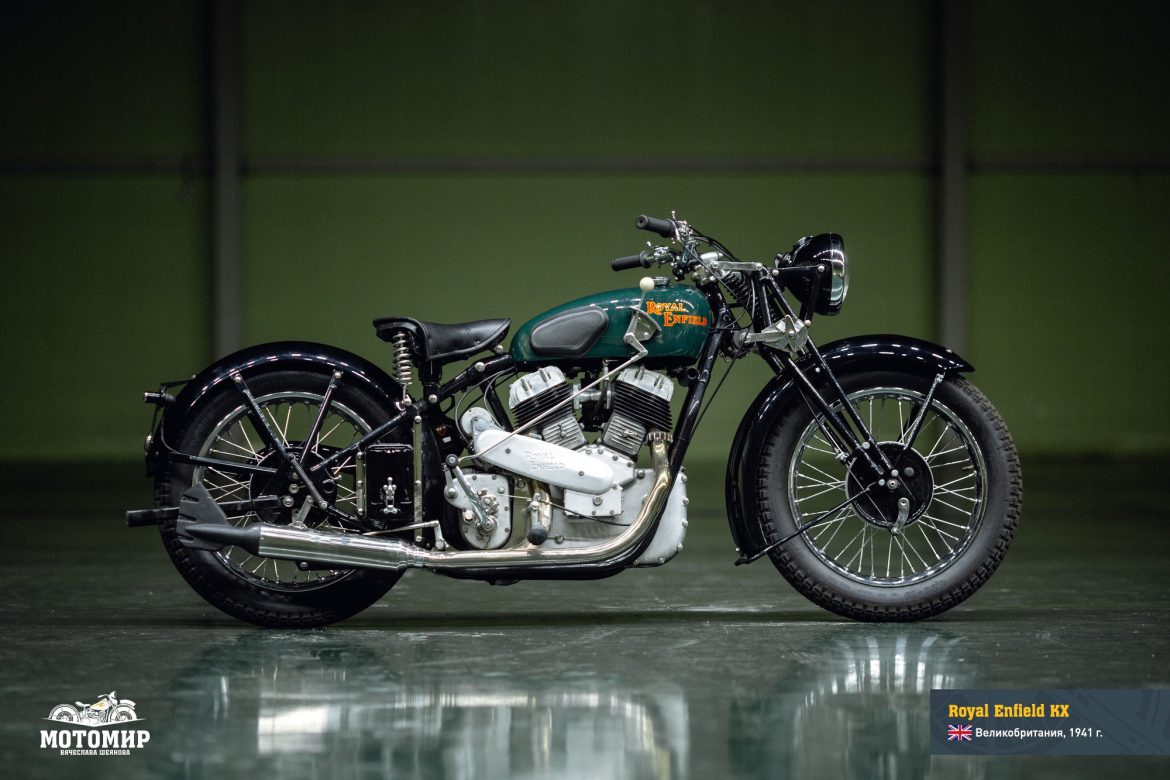 The 1930s were a true “golden age” for Royal Enfield: by 1938 company’s model range consisted of 18 models! Heavy twin-cylinder models were among them in a league of their own.

“The last word in luxury motorcycles!” — this was the advertising slogan for the Royal Enfield KX in the 1938 brochure. The flagship motorcycle of this company had a powerful twin-cylinder, L-head, 1140-cc engine, a dry-sump lubrication system, and a 4-speed manual gearbox, which made it possible to comfortably ride this motorcycle both with and without a sidecar. Standard features for Royal Enfield motorcycles were Lucas magdyno and black-and-gold finish.

Model KX was, in principle, an improved version of a practically ideal machine, Model K, that had a motor of smaller capacity—996 cc. In addition, Model KX was provided with interchangeable tires. The solo version could achieve 130 km/h boasting of fuel consumption of 27 km per liter. That despite the fact that Royal Enfield KX was a motorcycle with one of the largest capacities in that time (and certainly the largest on the pre-WWII market in England)!

The first sales of Model K started in 1933. Model KX appeared in 1936 and was at first only exported so that only by the 1937 season its sales started in its home country.

In October of 1938, the Motor Cycling magazine organized race tests of the motorcycle version with a sidecar in which a 90-kg passenger was sitting. Royal Enfield KX showed excellent performance with its average velocity of 93 km/h, but its fuel consumption increased as compared to what was stated for the solo version: 18.7 km per liter.

Motorcycle production stopped at the start of World War II when Royal Enfield switched to military contracts manufacturing only 350-cc models—Model C and CO. Nevertheless, one more Model KX motorcycle was made in order to be presented to some military. This experimental model had serious changes: a drive was installed to the sidecar wheel and the look was modified in accordance with the army nomenclature (and this motorcycle started looking a lot like the famous Norton Big Four). This experiment was, however, ill-fated: at the time, the army commandment already turned its attention to a new Jeep, while the era of cross-country motorcycles was coming to an end.