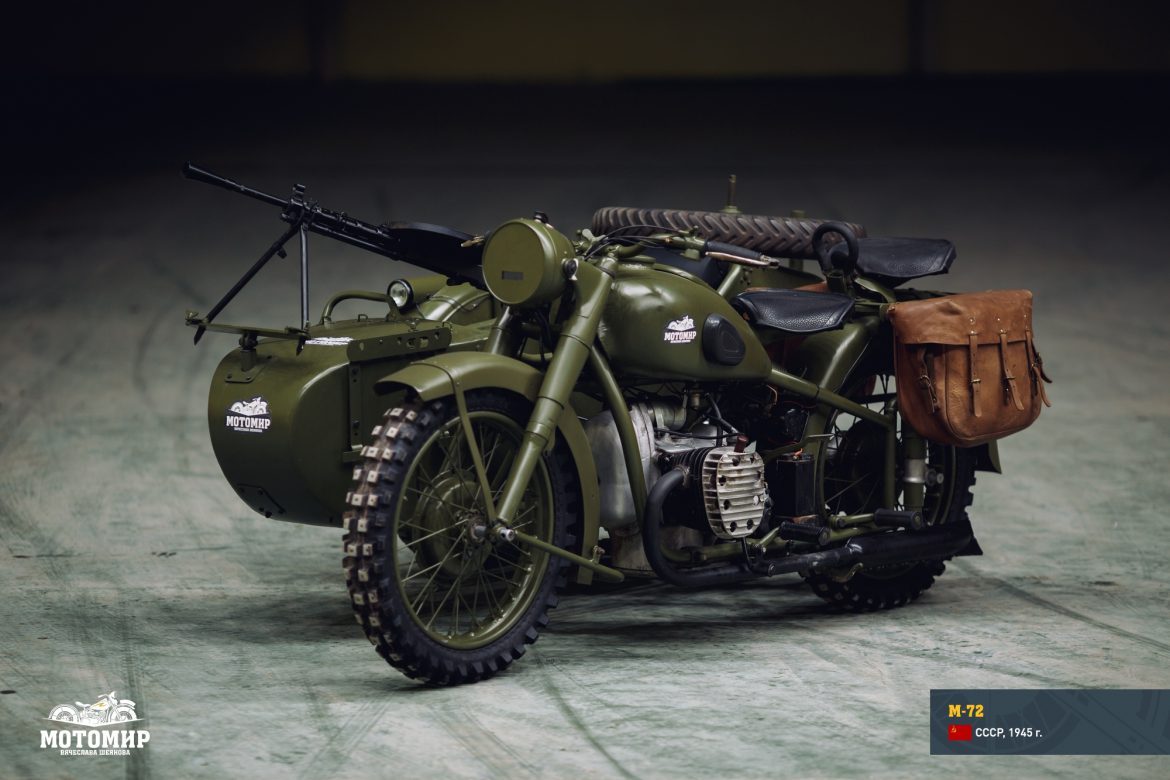 Based on BMW R-71, the pre-WWII model, the Soviet heavy motorcycle M-72 was produced from 1941 to the mid-1950s. The design work was commenced in 1939 when the Soviet government, alarmed with Hitler’s ambitions for expanding German-controlled territory, started the rearmament of the Red Army. Germans were very successful in designing heavy motorcycles, so a decision was made to adapt a relevant German technological solution, in order to save time.

V. M. Molotov, Minister of Foreign Affairs of the USSR, had arranged a secret purchase of five BMW R-71 motorcycles in Sweden, and after that, the Soviet engineers immediately started their work. By the spring of 1941, the production of the M-72 model was launched at the Moscow Motorcycle Plant (MMZ). Under cooperation agreements the ZiS, the Moscow automobile plant prepared the documentation and delivered engines for the motorcycle, while the KIM (today the AZLK Automobile Plant, also in Moscow) provided gearboxes, and the GAZ, the Gorky Automobile Plant, produced the cardan shaft and the sidecar. The Moscow Bicycle Plant produced these motorcycles until 1951. The second production base was launched at the Kharkov plant, and it was getting engines from the Kiev Plant of Medical Instrumentation. In Leningrad, the Krasny Oktyabr [Red October] plant also took part in the production of the M-72. After February 1942, the M-72 motorcycles were manufactured in Irbit (see Irbit Motorcycle Plant), since all the equipment and machinery from the MMZ, KiM, ATE-1, as well as the motor shop from the ZiS, were evacuated. Main Design Bureau was also relocated from Moscow to Irbit. It was headed by Aleksandr Minovich Fyodorov, while I.I. Okunev, N.A. Kukin, V.V. Bekman were among the designers, and S.I. Karzinkin and B.V. Zefirov were the test drivers.

The structural design of the BMW R-71 was made having mass production in mind, and, at the same time, it had many new technical solutions that were not used in Soviet motorcycles yet, e.g., duplex frame, gear changing by foot, spring suspension of the rear wheel, telescopic front fork, cardan drive, feeding of each cylinder from a separate carburetor.

The opposed positioning of the cylinders in the engine provided not only its great balance but also a low center of gravity for the motorcycle as a whole. In the M-72 it was located at the height of 592 mm.

All auxiliary units of the M-72 (breaker, oil pump, generator) were driven by gear wheels; cast-iron cylinders were coated with anticorrosive heat-resistant black varnish; it had roller connecting rod bearings of the crankshaft, while main bearings were ball-type. Connecting rods were not mounted on a common neck, but each had its own.

This is why the left cylinder was staggered forward by 39.2 mm as compared to the right cylinder. With the aim of decreasing the length of the motor case and, correspondingly, its mass (75 kg with the box), a two-bearing crankshaft was designed for the M-72, just as for its prototype, the BMW R-71. Overload of the engine occasionally resulted in the breakdown of its parts, even though they were made of high-quality steel (ZOKhMA or ZOKhGSA types).

This motorcycle was also equipped with bags for ammunition and spare parts, special brackets with a pan-and-tilt arrangement to install a machine gun (revolving bracket). The Degtyaryov machine gun was mounted via bipods on the base of the revolving bracket, which made its transportation easier and allowed firing from a still position and while riding. Tubular brackets in the front and at the back of the sidecar provided the means for inserting the revolving bracket, made firing possible both along the direction of the driving and to the back. The army also got in very small numbers of motorcycle modifications with an 82-mm mortar launcher mounted instead of the sidecar case.

M-72 went through a slow cycle of modernization before the IMZ started producing an advanced model M-72N in 1956. Thus, in 1949, the plant introduced a double air filter, both mesh filter and inertial oil filter, which were more effective than the previous ones. After 1950, the motorcycles were completed with a new generator regulator, RR-31, instead of the initial one, RR-1. Later on, in 1952, an improved generator was introduced, G11A. Its capacity, however, was the same, both for its preceding version (G11) and its subsequent model (G414). For the whole duration of the M-72 production, including its heirs, the structure of the carburetor K-37, the size of the tires (3.75 x 19), and some other units have remained unchanged.

Over the whole production period, a total of more than 330 thousand M-72 motorcycles were manufactured.

Materials from the article «Heirs of BMW R-71» at Moto.By were used here.