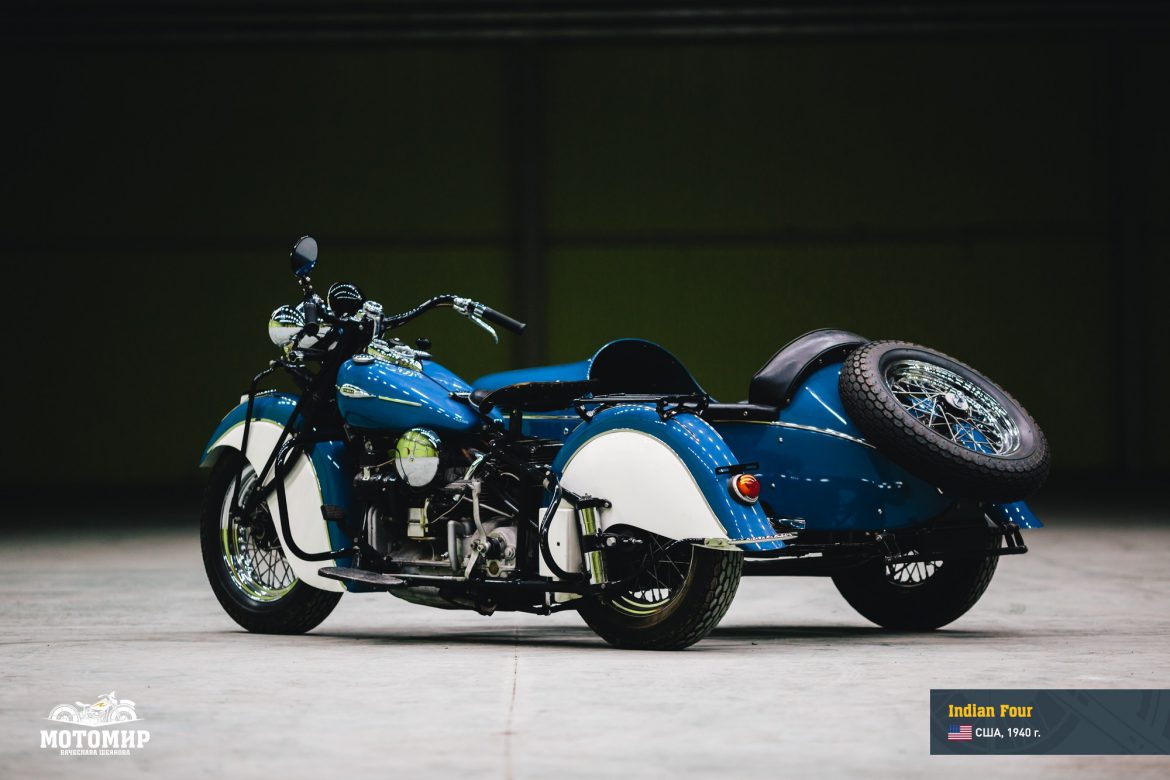 The story of Indian Four motorcycles started in December 1926, when Indian Motorcycle Co. acquired the rights to manufacture motorcycles under the Ace brand from Michigan Motors Corporation. The Ace Four motorcycle, the brainchild of engineer William Henderson, had high hopes. With this bike Indian was hoping to win the competition with its old-time rival – Harley-Davidson company, and it required a flagship motorcycle. The powerful, 4-cylinder Ace Four was a perfect match for this role.

No changes were made to the design of the first Ace motorcycles, which were sold under Indian brand name (they were called Indian Ace). They were simply repainted in the corporate color ‘Indian red’, the fuel tank got a mascot – the head of the Chief and the inscription «Indian» with a small attribute below – «Ace». However, already in August 1927, 1928 models were announced, among which was the Indian Collegiate Four – a motorcycle with a new high-pressure oil system, which was to increase maximum speed and overall engine reliability.

Subsequent modification of the Four were made to better integrate the motorcycle into the Indian range and reduce production costs. The 1928 Indian 401 inherited all essential components from the 101 Scout: fuel tank mounting and design, seat pillar, rear part of the frame, fenders and fork. The differences were the additional auxiliary leaf of the front spring, needed to support the increased engine weight and, of course, the engine itself.

The 1940 Indian 440 embodied all the design changes to the motorcycle series developed by Indian engineers led by Arthur Lemon. Significant modifications were as follows: heavier frame, two-part fuel tank, five-point crankshaft mounting, paired and cast cylinders, chrome exhaust pipes, a special design of rear suspension using a screw spring, multiple changes in the design of the mudguards and tire types. For an additional 50 dollars, magneto ignition system could be installed.

All these innovations, combined with increased weight, have brought the smoothness of the ride to a whole new level. The Four has never been positioned as an off-road motorcycle (the main reason being the open crankcase), Indian recommended it rather as a comfortable and powerful vehicle for highway travel, capable of speeding up to 160 km/h.

After 1940, Series Four motorcycles were produced for another two years, mainly on orders from law enforcement agencies. After the attack on Pearl Harbor in December 1941, all sales to civilians were suspended and the industry, including the motorcycle industry, began to work for the benefit of the war machine.

After WWII, Indian didn’t resume production of the Four model, because its price would have become astronomical, due to the inflation (well, it was a highly-priced motorcycle even before the war, comparable to such cars as Chevrolet or Buick). The company concentrated on lightweight models. Thus, in 1942, the story of the Indian Four was over.