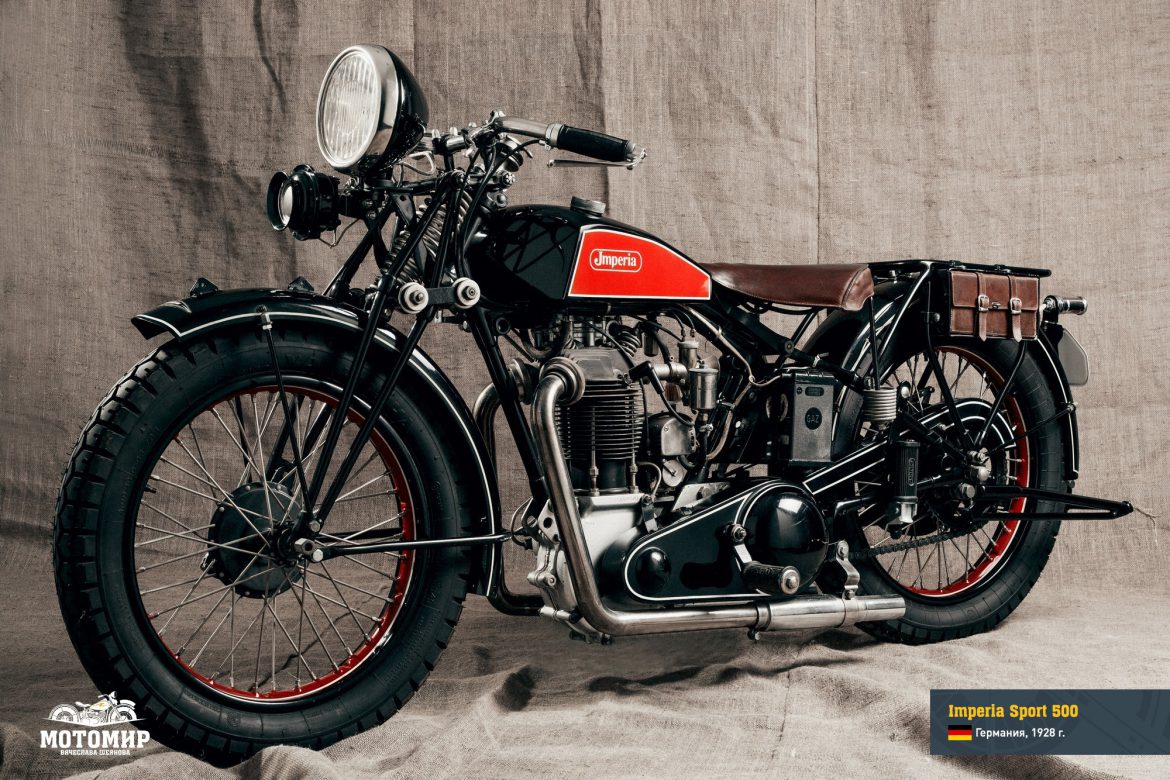 
In 1929, Imperia released one of its most successful models, which reproduced the sports style that was popular at the time. High-quality structure, great riding stability, an engine with a “hot temper” and, last but not least, its sweeping profile — that was enough to call this machine ‘Sport’ (according to factory nomenclature, it was designated “500 H”).

The 500 Sport model was the response of Rudolf Schrödter and his brother Felix Schrödter to many requests for upgrading, made by the Imperia owners. This new motorcycle replaced all previous models, and for about a year it stayed the only model under the Imperia brand. This machine was designed and assembled by Rudolf Schrödter himself. As before, it was a typical Imperia: a sports class motorcycle designed for experienced drivers. Fans of the brand liked the new model.

A super-modern, long-stroke model with a single-cylinder, 4-stroke, OHV Swiss MAG engine, made by Motosacoche, with two exhaust ports and 500-cc capacity of IC9M type, could develop up to 5,000 rpm and had an output of 22 hp. For an additional price, Imperia installed a control lever on the steering wheel to control the carburetor throttle, which had a beneficial effect on the acceleration dynamics. The quality of MAG engine was matching the quality of the motorcycle. These engines were fast enough to rival such brands as NSU, DKW and BMW in the late 1930! The image of an exacting and respectable company was enhanced by its eminent spare parts suppliers, such as Bosch (magneto), Wittkopp (seat) or Brüsselbach (fork of the Tiger type). The frame was made by Imperia, under a patented “pressurized joint brazing procedure” (in German: “Drucklötverfahren”). The removable rear wheel axle, which helped to deal with frequent tire punctures, was regarded at the time as a first-class construction solution. In 1929, the fuel tank was located under the seat — a genuine breakthrough for that time!

Despite the economic crisis, the Imperia 500 Sport was a success and laid a foundation for other models. The Nazi takeover had a positive commercial effect on Imperia but for a short period of time. The market was revived by general optimism, the elimination of taxes on new vehicle models, as well as due to fighting unemployment and government support for the development of full-size cars and motorcycle vehicles — the Nazi government, however, prohibited the procurement of foreign-made components due to the deficit in foreign exchange. This had a dramatic effect on this sports brand: by 1935, all models with MAG and Python engines disappeared from the production program. Later that year, Imperia stopped motorcycle production and by 1939 the company ceased to exist.