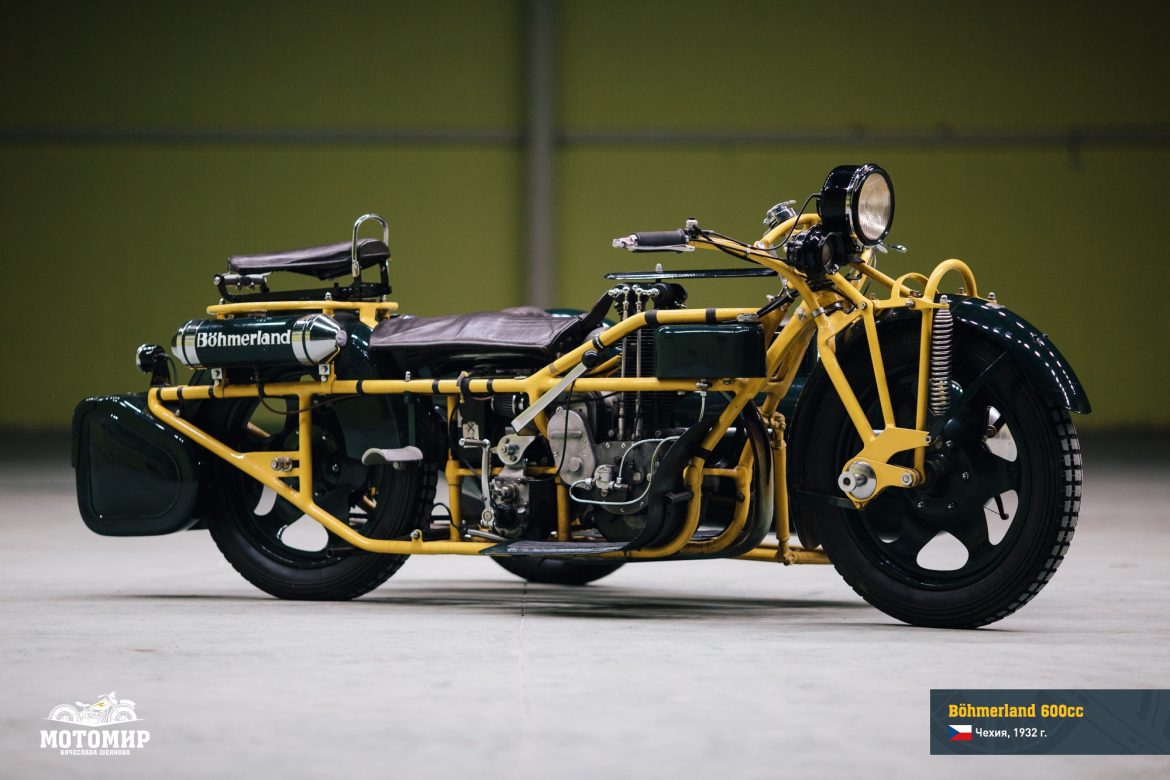 Čechie-Böhmerland motorcycles were produced in Czechoslovakia from 1924 until the start of World War II (the former name was used for the internal market and the second name for exports to Germany. The “father” of the brand was designer Albin Liebisch who began his technical career as a bicycle mechanic assistant, then studied at a technical school, worked as a mechanic for a while, and after WWI became a foreman with Tatra Works. Later he transferred to a small transportation company owned by Alfred Hille [SIC!!] where worked at the same time as a mechanic and as a driver of heavy-duty trucks. Hille was both a rich businessman whose company was thriving and an avid racing car driver. He had driven well-known sports cars and also sometimes sold them. With his support, Liebisch started designing a motorcycle that was supposed to be unlike any other model that was already on the market. The first prototype was ready by 1922, and Liebisch’s ideas were all implemented in it: a long wheelbase, OHV motor with a large capacity, a built-up leading-link front fork, and solid cast wheels.

All work processes were done manually, which raised their cost substantially and increased the production time of each unit. It is not surprising, then, that the first five units were assembled and tested only by 1925. The designer was quite happy with the results of the production testing, and thus a new manufacturing plant was started which carried a rather long name: “Böhmerland, Albin Liebisch’s motorcycle production plant in Schönlinde, Czech Republic”. Well, “Böhmerland” means “Bohemia” in direct translation from German, and it is a historical name for today’s territory of the Czech Republic. This is why Liebisch’s motorcycles were later sold under the two names: «Čechie-Böhmerland». 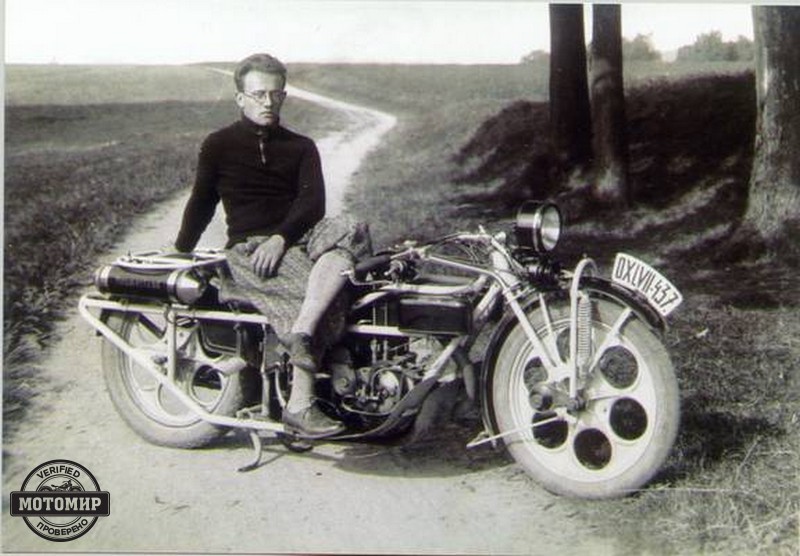 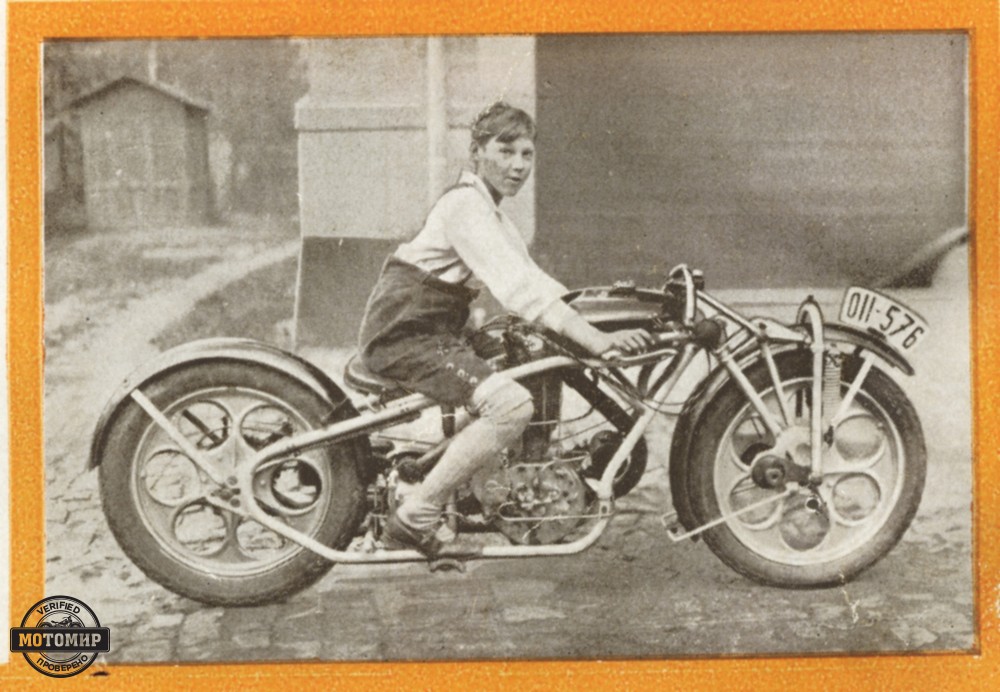 Böhmerland was called a “Dachshund motorcycle” since it is acknowledged to be the longest serially-produced two-wheeler. It had a sturdy duplex frame, which was a tubular steel girder with vertical and horizontal reinforcing connectors. The length of the frame left enough space for a uniform dual seat behind the motor, and there was also the third seat, above the rear wheel, on the carrier. “Three riders in one row” is one more record for Böhmerland which had a total length over 3 meters.

The front fork had a very complex structure: tubular triangular blades with internal reinforcement elements were welded to cross bridges. Short horizontal arms and lower ends of the strong vertical springs were attached to the lower parts of the blades. The front-wheel axis and the vertical yoke were cantilever-fitted to the arms and the yoke was spring-mounted allowing for the vertical displacement of the wheel.

The wheels had been made of cast aluminum for quite a long time after the model production started. They had neat circular openings, with flanges around them and reinforcement elements around the center boss. The wheels were eventually made of stamped steel in the last years of production, but Liebisch had never used spokes. The chosen size of rubber tires was gigantic: 27 x 3.85 inches. 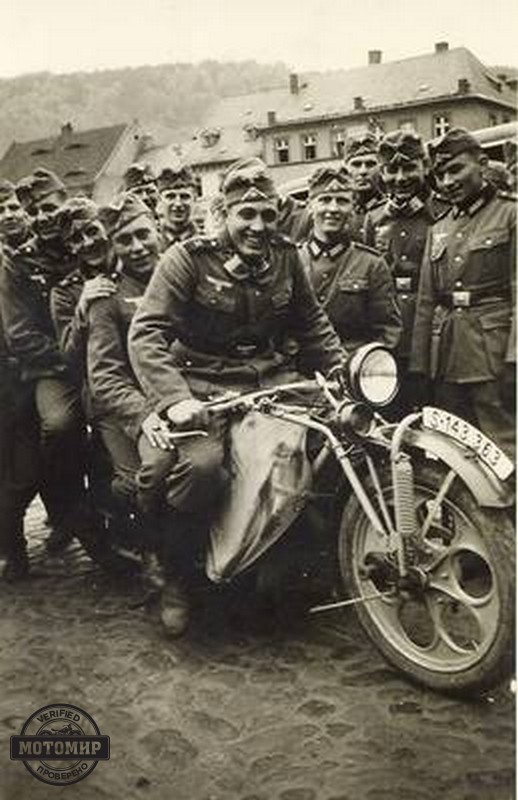 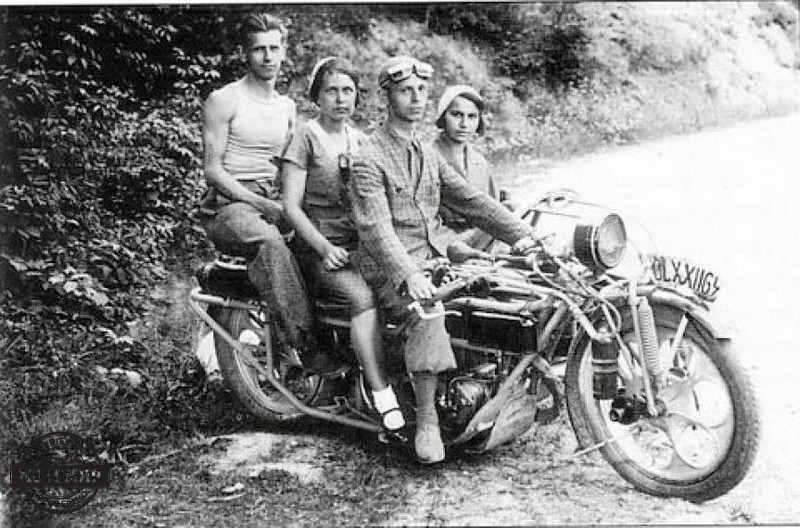 Three seats on the motorcycle and one more in the sidecar. The tour version of Böhmerland was presented as a motorcycle for the family.

Liebisch-designed 600cc OHV engine looked awesome with the bore 79.8 mm and the stroke 120 mm. Long valve actuator rods were located on the right side of the cylinder. Quite a big valve actuating system was uncovered. There was no forced valves lubrication designed, so the rider had to oil valves manually from the stand-alone oil cup during stops. Rest assured that the most part of oil had been streaming onto the driver’s legs after the engine start. Moreover, there was no gas tank above the cylinder, there was located only a light horizontal stamped screen.

No fuel tank in ordinary, only 5-liter cylinders were attached on both sides of the rear frame part with the total length of the fuel supply pipe close to 2 meters. An oil tank was attached in front of the cylinder. A small carrier box was equipped on the left side symmetrical to the oil tank, and one more toolbox was fixed behind the rear wheel.

The carburetor was designed pretty far and much lower than the cylinder: there was the magneto between them. So the inlet pipe was quite long, however, this helped to smooth off the airflow pulsations at the inlet. Magneto, carburetor, and the 3-speed transmission with a manual gear-lever had been supplied by third-party suppliers that were changed from time to time. One more technical feature was a nut socket for the spare spark plug that was located on the crankcase, in front of the cylinder.

Manufacturer specifications: the rating of 16 h.p. at 4000 rpm, the fuel consumption of 3-4 liters on 100 km (with a sidecar), and the maximum speed up to 120 km/h. The latter was pretty much a designer’s optimism, as it remained unknown whether anyone risked accelerating the Böhmerland to its rated maximum speed. The model’s dynamic was truly low. Also, the vehicle was stable only on straight roads due to its wheelbase, yet it could start behaving treacherously if the driver hadn’t chosen the correct speed at the corners. Riding 600cc Bohmerland you should remember, that you may have not enough strength to hold this heavy (mass over 180 kg) and long motorcycle. Riding with a sidecar is always much less dangerous.

Despite certain advantages, Böhmerland sales were not great. Mostly motorcycles were sold to the enthusiasts who they liked the unusual design. Not much over 3000 motorcycles of various modifications were made during the overall production period of the «Čechie-Böhmerland» brand. There were two-, three- and even four-seat models produced (the latter for the military) both in solo and sidecar versions.

* – According to the results of the measurement at the exhibit “Motorworld by V.Sheyanov”.