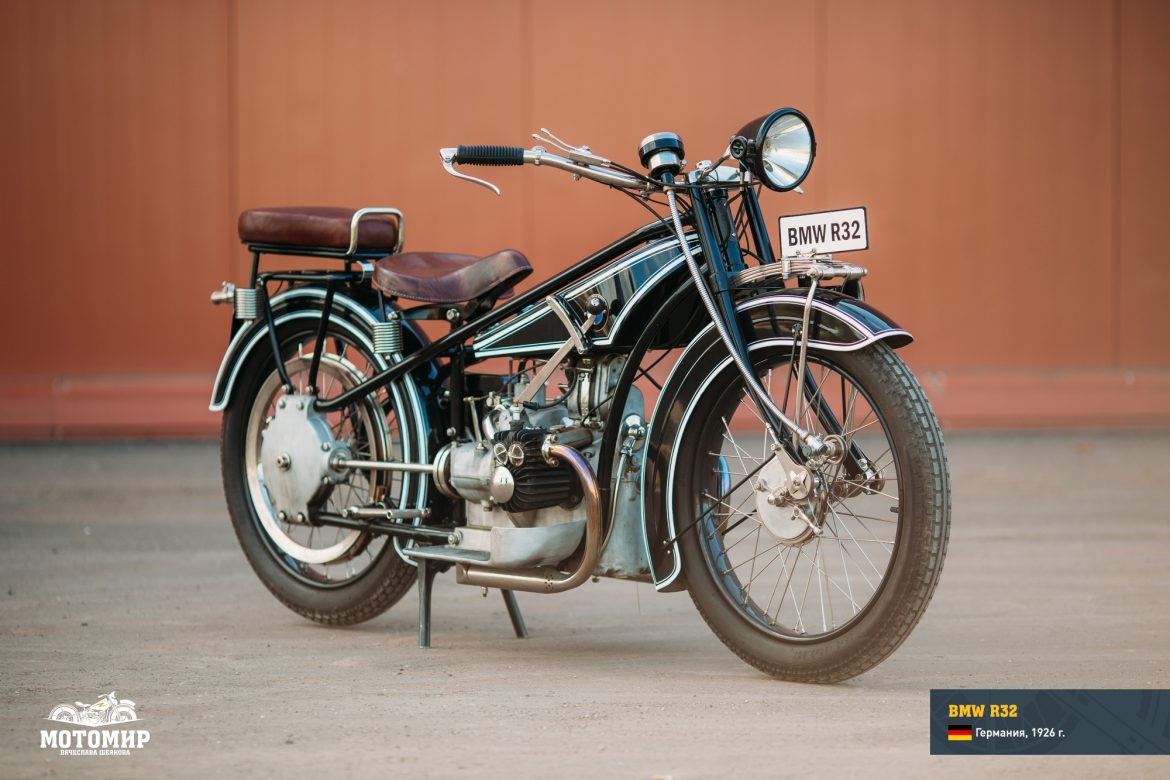 In 1922 the BMW company, which until then specialized mostly in motorcycle and aviation motors, bought out Otto company in order to start serial production of motorcycles. 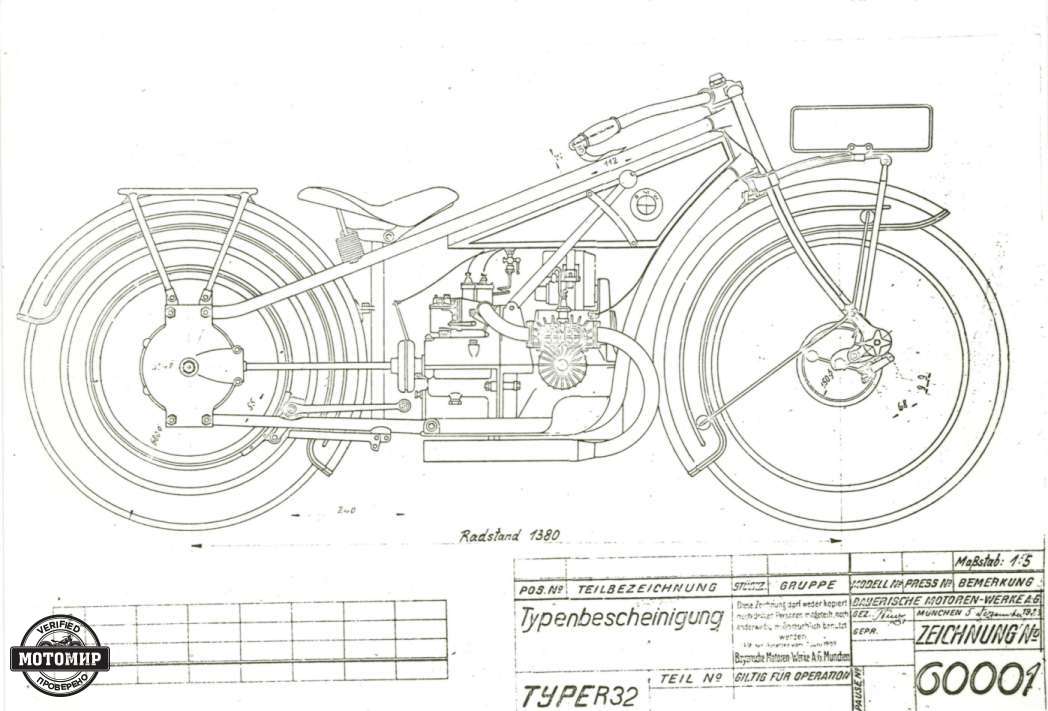 The draft of BMW R 32 made by Max Fritz

Max Fritz, chief engineer of BMW, was personally involved in developing the new motorcycle. He was giving it his full attention and all of his time: he even had a drafting board in his house. Within a month, practically from scratch, Mr. Fritz created a complete design of the motorcycle in full scale, and it was ready by December 1922.

A motorcycle with R32 index, shown at the 1923 Paris Salon, proved to be a true novelty. A slightly improved horizontally opposed motor was arranged with its cylinders across the frame, which greatly improved its cooling. It wasn’t a totally original solution: the ABC company was already producing such motorcycles, but no one had thought of using a cardan shaft, even though this idea was obvious. In fact, from the beginning of the 20th century FN motorcycles were provided with a cardan drive of the rear wheel, while the crankshaft of the motor was arranged lengthway. 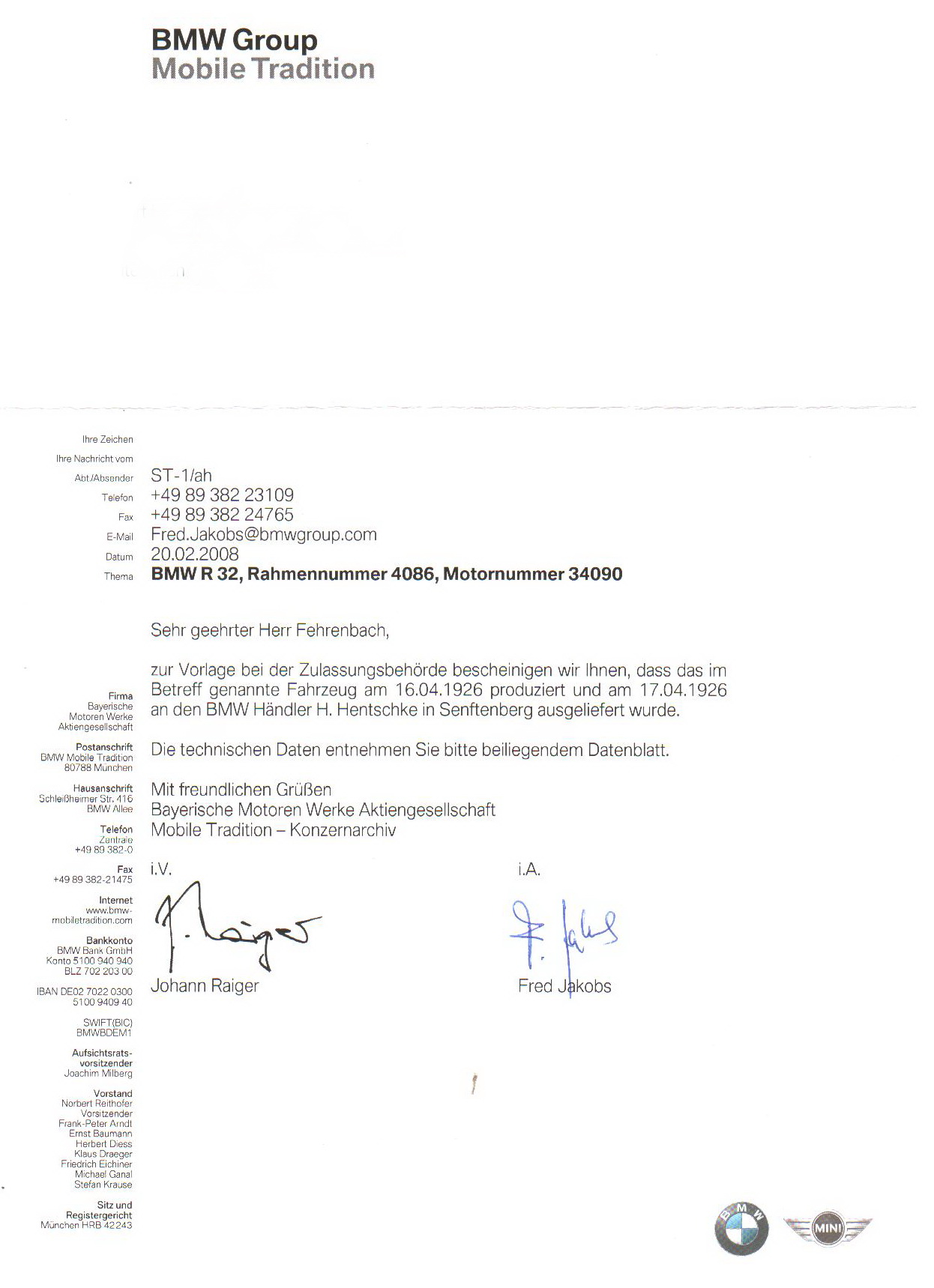 Letter from BMW confirming the production date of the motorcycle (April 16, 1926) and the date when it was shipped to a dealer in Senftenberg (April 17, 1926).

L-head engine with 494 cc capacity and engine rate of 8.5 h.p. at 3900 rpm had round stationary cylinder heads with characteristic finning, into which original finned plugs were screwed in to allow regulation of valves. The bore and stroke were “square” type – 68×68 mm, ratio of compression was 5:1. The innovative three-speed gearbox was installed in the same unit with the engine. Cardan shaft was made without U-joints but with the only one flex disk used to smooth out snatching in the transmission.

The duplex tubular frame was carrying a triangular fuel tank under its upper tubes. The front fork was sprung while fork stays were made of simply bent pipes with a lever mechanism at their end. Both wheels had brakes, but if the front drum brake was a very innovative solution for 1923, the rear brake was a primitive shoe brake. Moreover, a shoe was made of wood! The brake pedal was made on the right side.

Even though the engine wasn’t powerful, the total mass of 122 kg made it possible to ride with a maximum speed of up to 90 km/h. BMW R32 quickly earned the recognition of the general public, with its unusual exterior, high reliability, and great road performance.