In 1936, the Ministry of Defence of Belgium announced a tender for design of heavy military motorcycle for communication, logistics and fire support. A lot of motorcycle manufacturers have responded to that call. On one hand, they saw an opportunity to make a serious profit off it and recover from the consequences of the world economic crisis [the production of vehicles in those years had fallen to a couple of thousands a year]. On the other hand, as the world’s leading armory companies, some manufacturers were seeking the necessary connection with the Ministry of Defence.

It is noteworthy that the three largest motorcycle manufacturers [FN, Gillet Herstal и Sarolea] suddenly switched to the new level of production using the advanced engineering designs that had very little in common with what they had done before. For the first time, they’ve introduced a very useful device for the off-road vehicle such as a sidecar wheel drive, outperforming even the Germans and the British. It was almost as if at that time all of the inspiration was concentrated in Herstal, Belgium, where all three factories were located.

If the Gillet Herstal 720 AB was very differed from all the contestants and military motorcycles from other countries [it was the only vehicle with two-stroke engine], the Sarolea 38H and FN M12a SM, at first glance, looked like twins. One might have thought that the designers of both companies exchanged drawings during lunch! But once you go into detail, the cardinal differences become visible. 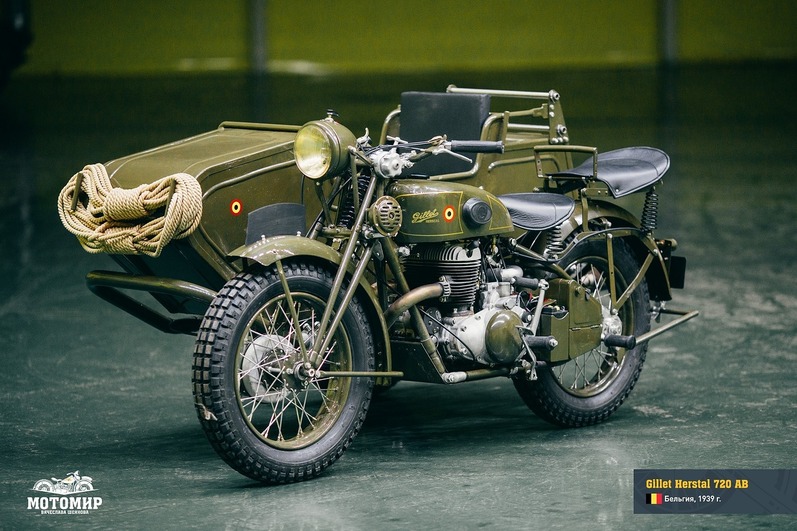 Gillet Herstal 720 AB from the collection «Motorworld by V.Sheynov» 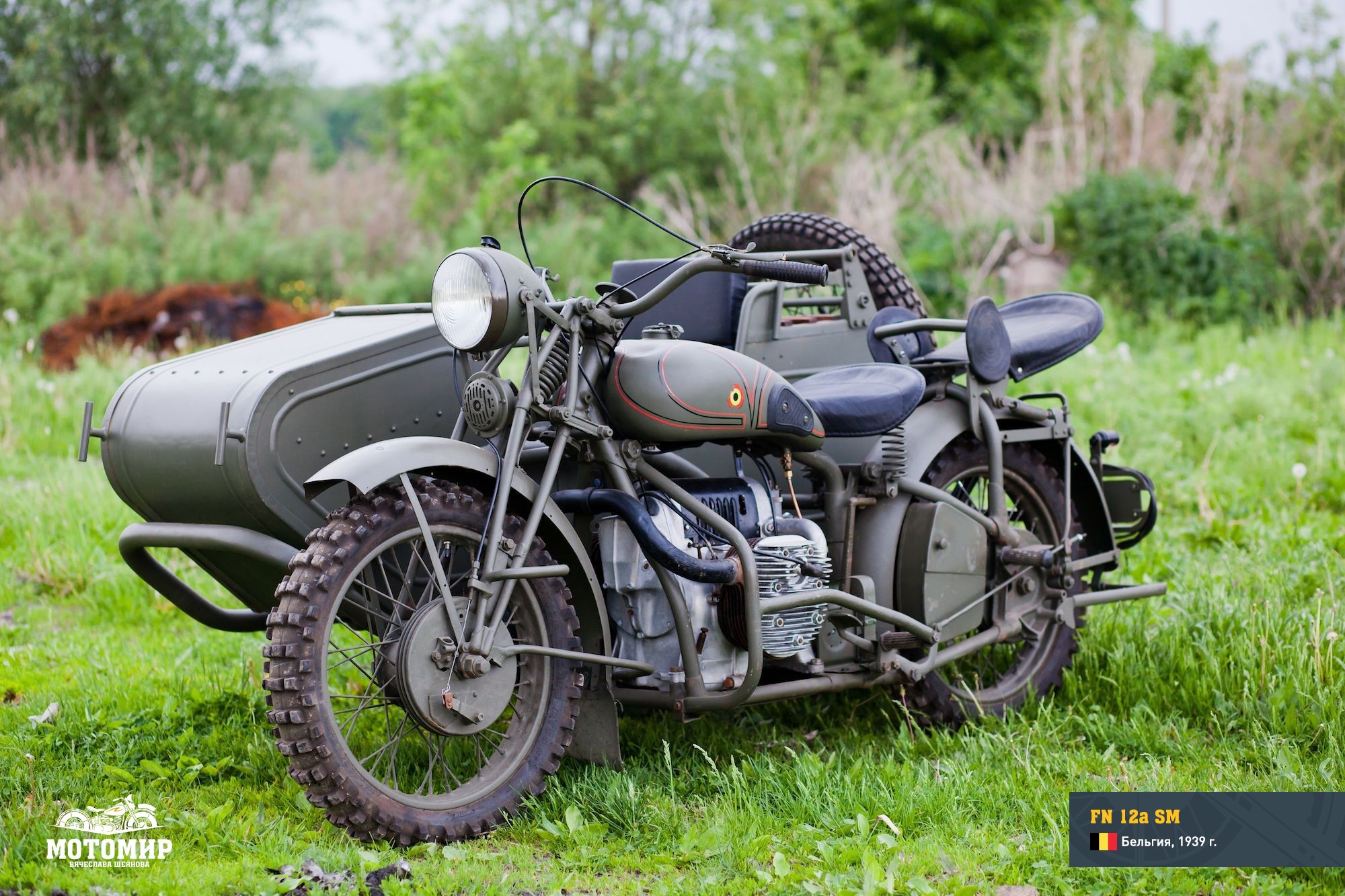 It wasn’t surprising that the specialists of both companies chose the flat-four engine: they were under the influence of the BMW R12 – the best military motorcycle of the 30s. The engineers from Sarolea chose a different path and took as a basis the engine from the BMW model R5. Out of that comes the complex scheme of gas-distributing mechanism with two drive chains and camshafts per each cylinder located in the crankcase. That allowed to reduce the amount of reciprocally moving air mass. This structure had fitted perfectly with the high-speed overhead engine but was too complicated for the flat-head engine with only 4000 rpm. The engineers from Sarolea have made their choice in favor of the flat-head engine that is not picky about fuel quality and has good traction at idle, which is important for a military vehicle. The working volume of the engine had to be increased to 974 cc in order to supply the necessary power [20 hp] for such a heavy machine [545 kg!]. This bike had a short-stroke engine (88х80 mm), which occupied less space, and an ignition magneto [unlike the FN model that had a battery ignition system]. But the exhaust system looked exactly identical to the competitor’s: the exhaust pipe of the left cylinder was arched upward and connected to the exhaust pipe of the right cylinder turning into a single muffler located between the motorcycle and the sidecar.

The transmission of the motorcycle was a true masterpiece. The three-speed gearbox with a reverse gear and a car-type coulisse shifter was connected to the engine. The power to the rear wheel was transmitted via cardan shaft, a two-step demultiplicator was located at the rear axle. The sidecar wheel drive had a differential so it could be used on a hard surface and turned-off when no longer needed.

The base of the chassis was a strong duplex frame. The front wheel was fixed in the parallelogram fork. The bike had a stiff rear suspension (the normal practice for the time) and Englebert Tractor tires. The sidecar frame was made of large-diameter steel pipes, the frontal side of the sidecar was facing upward so it could overcome any obstacle. There were three different types of bodywork: “Officier”, “Personnel” and an ordinary cargo box. For either of the variants the spare wheel had been included.

When the results of the army contest had been collected, it turned out that… everyone’s a winner! Apparently, the desire to support domestic manufacturers and diversify the supply sources was stronger than ideas of unification and logistic concerns (however, the last point didn’t seem that important for a country where the distance between any given point and the factory-manufacturer does not exceed 200 km). The Sarolea company has received an order of 300 motorcycles of model 38 H. 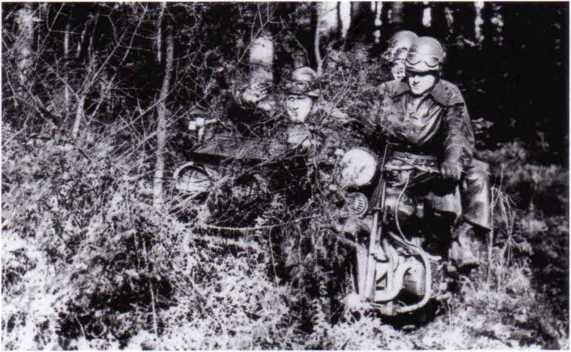 But the Ministry of Defence of Belgium didn’t stop there and in July of 1938 in Ardennes organized a big international competition of military motorcycles. Besides Belgian models, there were the French Gnome & Rhone, German BMW, and Italian Moto Guzzi. On a 23 km mountain road that sometimes was going up at 45 degrees, the French lost to the Belgians 2.5 hours, and the Germans – 5.5 hours! There is no doubt that the next generation of German military bikes (BMW R75 and Zundapp KS750) was influenced by the Sarolea 38H.

In 1939, the Sarolea company has manufactured ten solo motorcycles with 1L boxer engines – it was the 39H model. They were equipped with simplified transmissions (without demutiplicators) and four-speed gearboxes.

Unfortunately, the Sarolea 38H motorcycles didn’t have a chance to serve in the Belgian army. The military campaign of 1940 (from the invasion of Germans until the surrender of the country) lasted only 18 days! As the story goes, before the surrender the Command issued an order to destroy all motorcycles as to deny them to the enemy. But the soldiers couldn’t do that to such a beautiful machine and eventually all of the Sarolea 38H motorcycles ended up in the hands of the Wehrmacht… and were destroyed in battles on the Eastern Front.