The design idea for creating the Ariel Square Four motorcycle came to Edward Turner in 1928. While looking for work at the time, he was showing around his drawings of an engine design to motorcycle manufacturers. His engine was very special owing to its unusual configuration: four cylinders were placed at the corners of a square. Two bent shafts were linked by a gear drive (its crowns were cut straight in the centrally located fly wheels); rod journals were fixed unto fly wheels via consoles, except for the left rear cylinder, from which the gear was connecting to the transmission. All valves were driven by a central, chain-driven overhead camshaft. Although the BSA company rejected the idea of making such an engine, this design was approved by Ariel 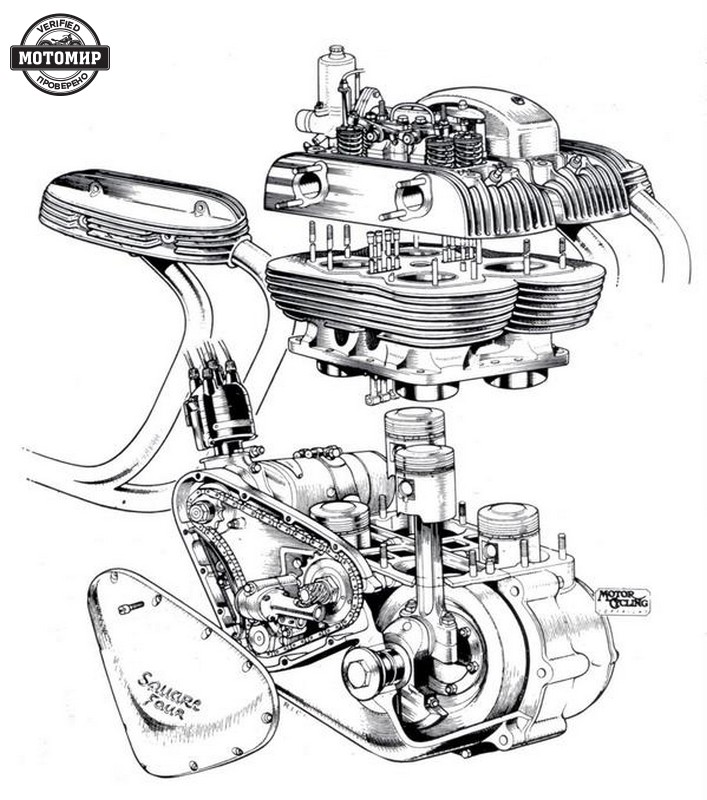 Ariel Square Four is one of the most charismatic British motorcycles created after the global economic crisis of the 1930s. The combination of its 4-cylinder engine with its 996-cc capacity resulted in a unique motorcycle that was in a class of its own because such a combination is rarely used with classical motorcycles. Despite its big mass of 197 kg, this motorcycle would easily achieve the speed of 160 km/h, and it was easy to drive.

Ariel Square Four, popularly nicknamed «Squariel», was positively accepted by clients, even despite its frequent problems with engine overheating due to poor cooling of its two “rear” cylinders. During the production period, starting with a prototype in 1930 and until this model was discontinued in 1958, a total of 15641 motorcycles were manufactured.

The side-car is a 1948 Bernardet Grand Routier GR.48, on an original 1948 T frame.
It was also produced in the model Grand Sport GS.48 Records du Monde type Avion.
It was the last side-car ever produced between 1947 to 1949 by Bernardet before they switched to scooters and still is the most famous of the whole production! © Archives Bernardet Family

* – Data on the results of the measurement of the “Motorworld by V.Sheyanov” exhibit.
Books: