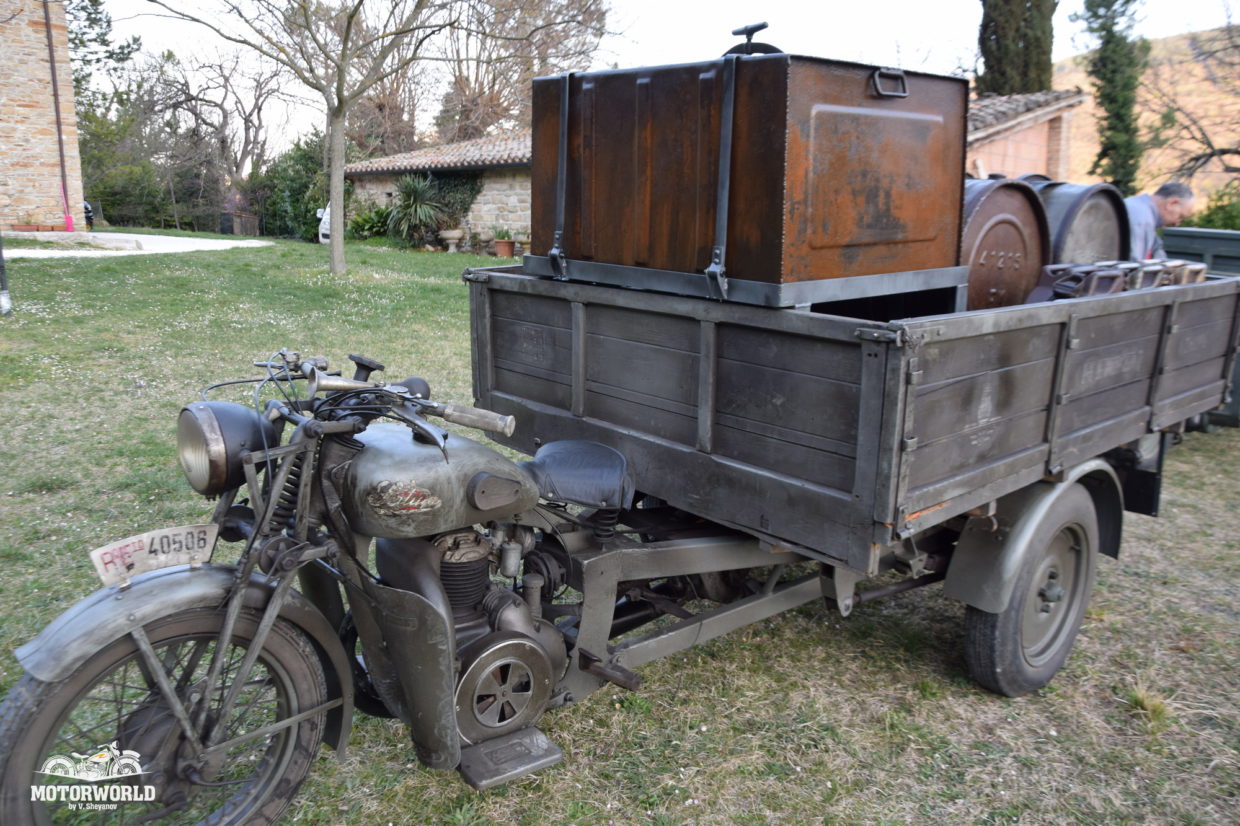 Officine Meccaniche Fausto Alberti SpA was founded in Milan in 1922 to manufacture tools, machines, and equipment for precision machining.

In 1931 the production of motorcycles under the Sertum brand was inaugurated, the first of which was based on original drawings. The rigid tubular frame with the parallelogram fork of the first Sertum motorcycle was fitted with a 175cc engine. Production met with public approval and thus began in brand new factories at Viale Certosa in Milan.

Since 1939, having captured significant market share, including through significant military deliveries that had previously been the exclusive domain of Moto Guzzi and Gilera, Sertum had distinguished itself with numerous gold medals in international races – the glorious Six Days International. It’s not for nothing that Sertum is Latin for “laurel wreath (of winners)”.

But why very few people know the Sertum brand? How is it possible that it “disappeared” so suddenly from memory, when the fleet of Sertum motorcycles after the war must have been quite large. Yes, less than Moto Guzzi or Gilera, but still on the order of several tens of thousands, maybe even more…

The answer is simple: a few years after the closure of production in 1951 the entire stock of spare parts and other assets of Officine Mechanics Fausto Alberti were sold at auction, but disappeared from the market. People lost the opportunity to repair their bikes, even outdated, and that was followed by oblivion of the brand.

We will talk about the model released in 1942.

The story begins August 9, 1941, when the Ministry of Defense of Italy issued an order “to standardize motorcycles and cargo trucks in an effort to achieve at least minimal unification to facilitate the supply of spare parts.

Sertum, as one of the five major motorcycle manufacturers, was ready to create a unified truck. Sertum’s unified three-wheeler has one feature that sets it apart from other manufacturers’ recent models: Sertum offered the possibility of absolute interchangeability of the engine and the entire front end, with the single-cylinder Sertum 500 military motorcycle supplied to the Royal Army. It should be added that this is the only Italian tricycle truly unified with a military motorcycle. By the way,

Sertum was the only company that came to a comprehensive solution to this problem, and, we repeat, its unified truck is equipped with a military motorcycle engine.

A unified truck has to have certain characteristics that are different from those of a motorcycle – its engine has to be adapted for much heavier work. If you look at the production of Italian motorcycles, unified with tricycles or not, you will see that almost all engines have an overhead valve arrangement, while on all but one military motorcycle you will have side valves. Aligning the same type of timing on the engine of both vehicle types was a challenge, and even those who tried it ended up abandoning side valves in favor of using overhead-valve engines on three-wheelers.

Sertum, on the other hand, insisted on using a lower-valve motor, and after tests conducted with the company’s inherent seriousness, fully succeeded in its intention.

Sertum has always been known for its low-valve engines, which is evidenced by the success of the 175cc and 250cc models, as well as the famous two-cylinder 500cc sport model that has won the famous endurance race, the Six Days International, many times.

The heart of unified Sertum trike was a single-cylinder bottom-valve engine, combined in a single unit with a gearbox. The 498 cm3 capacity is created by an 84 mm diameter piston with a stroke of 90 mm. At 4200 rpm with a compression of 1: 5.5, the engine output reaches 15 hp. The timing gear is on the right side of the engine and also controls the oil pump and the magneto. The valve cams are part of two separate shafts and the tappets rest directly on them.

The single engine block is cast from a two-layer aluminum alloy with highly developed fins. The crankcase contains, in addition to the engine parts, also the gearbox, clutch and oil pan. The cylinder is cast in special cast iron, with a heat-treated aluminum alloy head, both equipped with developed ribs, and the combustion chamber shape is designed to provide accelerated combustion. The 40.5mm diameter side valves are easy to adjust: the springs are protected by a cap that seals them tightly. The piston is cast in aluminum alloy with two o-rings and two scraper rings. The crankshaft is carefully balanced, made of specially hardened material and rests on two large roller bearings and one ball bearing. The connecting rod is cast from special steel. Lubrication is forced, with a large pump inside which provides a good circulation of oil (up to 45 liters per hour) which in addition to lubrication provides additional cooling of engine parts.

Additional engine cooling is achieved by means of a centrifugal fan, which directs an appropriate air flow between the cylinder ribs and the head. The fan is mounted on a shaft extended on the transmission side; there is a damper on the outside of the fan to reduce the flow of cold air if cooling is excessive, especially in winter.

The transmission is equipped with a gearbox, which is in a separate aluminum housing attached to the frame. The gearbox is thus provided with two forward gears (overdrive for high speeds and downshift for low speeds) and a third gear for reverse. There is also a familiar from other Italian tricycles “handbrake”, which is controlled by a hand lever under the saddle.

The rear axle is automotive type with supported half axles, with all mechanisms in an oil bath formed by the power structure of the axle. Because we have two external circuits, they work without causing too much tensile stress. The differential has cylindrical gears and the drive shafts, made of special oversized steel, are fitted at the ends with cylindrical “K” profile couplings, which eliminates wear and looseness. The transmission chain between the gearbox and the differential is enclosed in a laminar box with elastic mounts. The chain play is selected by adjusting the chain length with tensioners.

A frame of stamped and welded sheet metal supports the engine at the front and the body at the rear. Supporting frame elements are rigidly connected by crossbars and struts to increase their resistance and have increased strength at the most stressed points. Rear suspension is leaf-spring with straight leaf-spring ends sliding on sliding rails attached to the frame, which allow absorbing the reaction to the twisting moment of the engine or brakes. The slide rails allow the axle to be moved over a wide range to adjust the rear chain tension. The front suspension is realized by the usual parallelogram fork with a central compression spring.

The rear wheels are disc wheels with 6.00×16 transport tires, with pedal-operated, large-diameter brakes.

Brief characteristics: a payload of 1000 kg, maximum speed with a full load of about 70 km / h, the maximum grade which can be overcome with a full load of 33%, the average consumption per 100 kilometers: 7.5 liters of fuel. The ground clearance at maximum load is 0.205 m and the “wet” weight is 500 kg.

Now Sertum tricycle found in Italy is passing through the caring hands of our friend and restorer Costantino Frontalini and will soon join the ranks of “Motorworld by V. Sheyanov” museum.