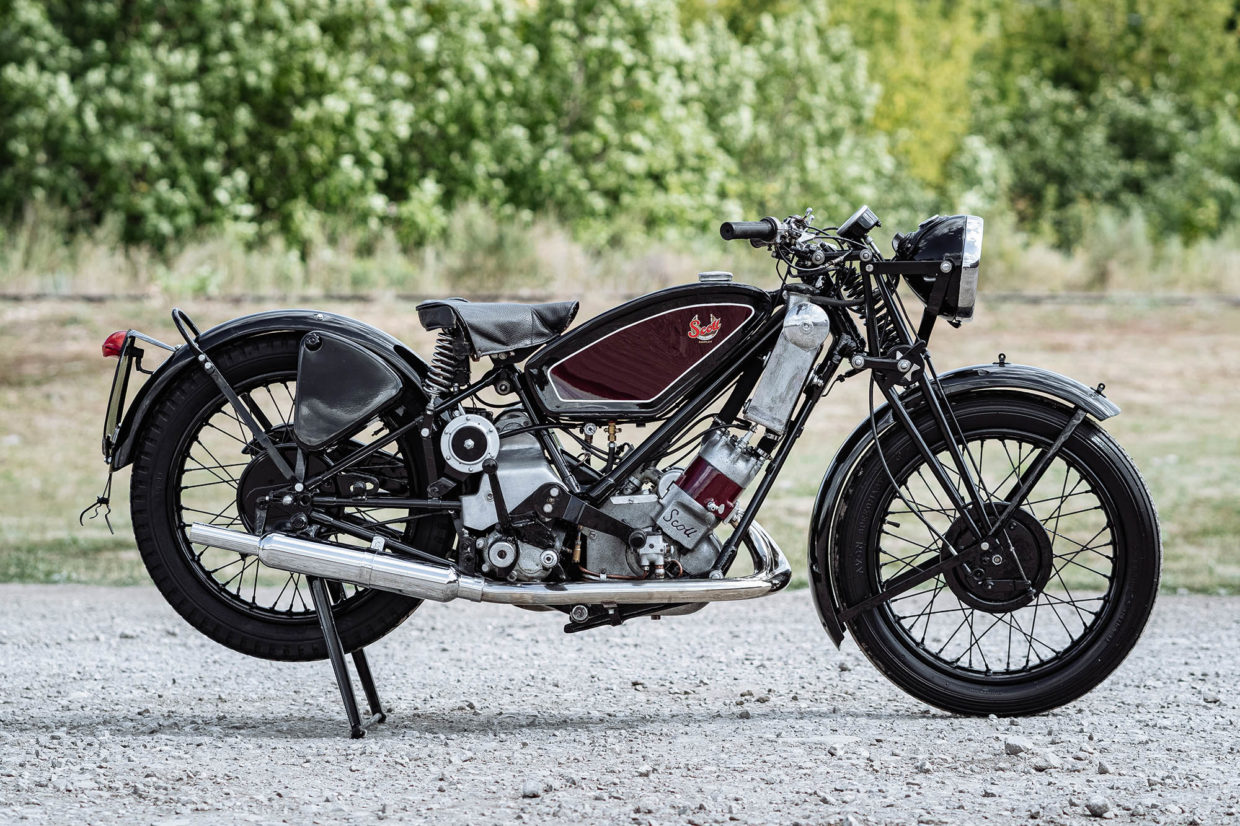 Scott motorcycles are almost unknown in Russia. In this regard, we took the liberty of making a small “guide” for those who want to understand the history of the brand and its technical details.

Depending on your goals, we suggest you read the entire article or go straight to the description of the “Motorworld by V.Sheyanov” motorcycle :

Scott Motorcycles and its legendary models Squirrel, Super Squirrel, and Flying Squirrel were at their peak of popularity in the 20s and 30s of the last century, sometimes head and shoulders ahead of competitors with similar engine’s displacement, but… There always was a small “but” that never allowed Scott motorcycles to stand on one step with the legendary Brough Superior or, at least, Triumph. About this “but” will be our today’s article.

Scott was founded by Alfred Angas Scott. You have probably heard this name if you are interested in the history of motorcycles since it was Scott who invented and/or patented the kickstarter, mono shock-absorbing suspension, rotary intake valves, drip oil lubrication, central crankshaft bearings, etc… And most importantly, it is Scott’s patented designs that are the basis for the production of modern two-stroke engines.

In fact, the first Scott was so powerful that as soon as it hit the racetrack in 1911, the actual displacement of these engines was multiplied by 1.32, which automatically put Scott in the next level class. The reason is simple – four-stroke machines of the same displacement couldn’t compete with Scott motorcycles. Yes, it became harder to win, but Scott mentioned this fact in every ad, which had a positive impact on sales.

At the beginning of the 20th century, as it is now, no motorcycle manufacturer could count on high sales level until he wins the T.T. Tourist Trophy on the Isle of Man. Scott was no exception and raced the TT several times between 1910 and 1930. In 1910, the Scott was the first two-stroke motorcycle to finish the TT race, and in 1911 the Squirrel that Frank Phillip rode set the record for an average lap speed of 80.65 km/h (50.11 mph). This was the beginning of the winning streak: Scott’s motorcycles were the fastest on the lap in 1912, 1913, and 1914, and also won the race in 1912 and 1913.

In 1919, Alfred Scott had left the company and founded a new one, continuing to develop the Scott Sociable – a pioneering three-wheeler, not as successful as the Scott motorcycle, while the Scott Motorcycle Company continued without a founding father.

Great engineer A. A. Scott was also fond of speleology and was an avid cave explorer. Unfortunately, this hobby caused his early death at the age of 48. In 1923, Alfred Scott died of pneumonia, falling ill while driving Sociable in wet clothes, after a grueling tour of the caves. His ideas, however, continued to live on.

In the early 30s of the last century, the model, equipped with an outdated frame and a two-speed gearbox, was discontinued; in each new season, the weight of the motorcycle increased due to an increasing number of additional options, which negatively affected the dynamics of the motorcycles.

In 1934/35 Scott Motorcycle introduced a brand new model equipped with an in-line three-cylinder 750 cc water-cooled engine. A little later a version with a “liter” engine was presented, but none of these motorcycles were put into mass production.

The gradual changes resulted in one of the heaviest Scott models in 1939. The Scott Clubman Special weighed more than 180 kilograms and although the top speed reached the coveted 90 mph (145 km/h), against the backdrop of Triumph’s guaranteed 100 mph (160 km/h), it was dubious merit of the highly tuned engine of an outdated design.

All in all, the Scott Flying Squirrel two-stroke motorcycles never managed to gain a significant share of the whole motorcycle market. The “Squirrels” were expensive, the engine design was specific, and the radiator of the cooling system was easily damaged. This is how the production of Scott motorcycles was curtailed in 1940, and the plant switched to the production of military products.

After the end of World War II, Scott restarted the Flying Squirrel, but only the 600cc engine was available. Due to the more massive wheels, the model became even heavier, and due to the difficulties with production, it became more expensive. After a few hard years, the company was closed in 1950.

But the Scott motorcycle story did not end there either. In the late ’50s, the Scott production license was bought by Matt Holder, who decided to restart production in Birmingham, England. In 1956, the Birmingham Scott was announced – it was a model with a 596 cc engine, duplex frame, telescopic front fork, and rear suspension. The water-cooled radiator with a modified cast, and the Pilgrim oil pump remained characteristic of the Scott..

In 1958, the Scott Swift model was announced with a 500 cc engine, which was supposed to accelerate the model faster than the coveted 145 km/h. But Scott Swift did not go into mass production and Matt Holder returned to the old-style engines. Birmingham Scott motorcycles were produced until the late 1960s and all the time retained the features of the original Scott models.

In the early ’70s the Silk Scott was released, originally based on the Birmingham Scott engine. When the production rights prevented George Silk from casting replicas of the engine, he developed his own motor and started the Silk 700S production.

Silk motorcycles were produced in small numbers until 1978 when the history of this glorious brand finally ended. It is worth mentioning, however, that even the 1978 models retained the features of the very first Scott motorcycle of 1908.

If you do not want to read the technical “tediousness”, go straight to the description of our motorcycle: Motorworld’s exhibit.

Much of the information gathered below is based on the Scott Technicalities collection of articles originally written by Bill Jamieson. In the original, the historical information, well-spiced with technical details, takes up 867 typewritten pages but don’t be alarmed, we will leave only the most interesting.

Like any person who first encountered Scott motorcycles, we felt a stupor: there seems to be one single Squirrel model, but there is also a Flying Squirrel, a Tourist Squirrel, and even a Squirrel Sprint… How to distinguish them, when and which model was produced, why are Scott motorcycles so popular and how progressive they were at the production start?

Let’s take a look at Scott’s motorcycles in sequence, from the first model to the 1938 motorcycle, which is presented in the motorcycle museum “Motorworld by V.Sheyanov”.

The first Scott motorcycle was built on the basis of a bicycle frame, in the steering column of which Scott installed a homemade two-cylinder engine, which in 1908 was cooled not only by air but also had a “radiator”. The “radiator” was part of the engine’s head and was a finned tube that was attached to a finned water tank.

For the first time in mass production, the familiar liquid-cooled radiator appeared only in 1911 and until 1914 all Scott motorcycles had a pronounced “waist” around the cylinders, which provided water cooling of the engine.

Also, up to 1914, Scott motorcycles used carburetors of their own design, located in the free space between the two cylinders, and the oil that was required to operate the two-stroke engine was poured and stored in the frame tubes.

In 1913, Alfred Scott got rid of the complicated cylinder head, realizing that the metal around the spark plug wells was overcooled and thus sealed the water cooling channels at the top of the cylinders. This engine design remained unchanged until 1923.

Further, in order not to tire you with a detailed description of each model, let’s summarize the significant events in the history of the brand, presented in chronological order, in a table.

There was nothing unusual in the further development of the Scott models. Like many other manufacturers of those years, the Scott Motorcycle Company found its niche and systematically, from year to year, updated the models of accessories and collected profits from sales. And just like many other manufacturers, every generation of Scott motorcycles has been prepared for the November show. A model, for example, produced in 1938, could have been released in November-December 1937.

Also, Scott had a very interesting way of numbering engines: information about the volume, model, and, in fact, the year of manufacture of the engine is encoded in the number. The numbers were stamped in ascending order, but until 1924 they did not have letters in the number. Later, depending on the last letter of the number, Z or Y, the volume of the engine also changed – 498 cc or 596 cc respectively. A feature of the DPY engines (73.02 x 71.4 mm – 596 cc), which were replicas of the engines installed on the 1930 TT models, were the detachable engine heads.

By the way, the same index (DPY) was used on engines assembled by Matt Holder between 1951 and 1956 based on casting blocks from the old factory in Shipley. The first motor in this series was the DPY5427.

The following changes took place in the 1938 model range:

An automatic voltage regulator appeared only in 1937 and only then the need for a mechanical charge regulator disappeared. The Lucas MCR-1 regulator was located under the saddle, on the right seat tube.

Objectively, by 1938, the uniqueness of the brand manifested itself only in an unusual and, let’s be honest, inconvenient for everyday use two-stroke engine; in a design that echoed the models of the 20s; little things, like a flying squirrel on a sound signal, which delighted only fans of the brand.

To summarize, the 1938 model almost completely repeats the 1933 model, which, in turn, was not much different in technical terms from the models of the ’20s and which, with minor changes, were produced until 1940.

Like many other British motorcycles of the 30s, the Scott Flying Squirrel is almost unknown in the CIS, isn’t very popular in Europe, but is well known in its homeland, Great Britain. We hope that our visitors will really like the Squirrel. Well, who likes the English 2-stroke? 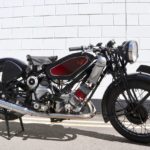 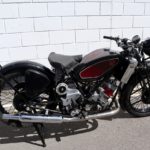 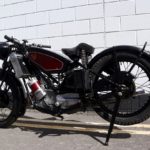 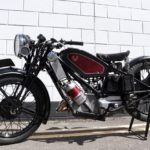 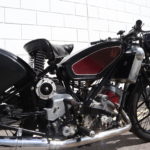 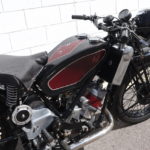 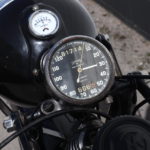 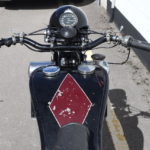 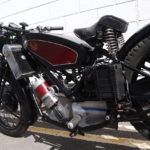 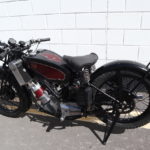 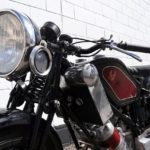 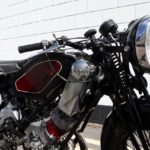 * – Data based on the measurement results at the exhibit “Motorworld by V.Sheyanov”.