The era of superbikes began even before such companies as Crocker, Vincent and Triumph have come onto the market. The story began when the new SS100 model or so called ‘The Rolls-Royce of Motorcycles’ was exhibited at the Olympia Motorcycle Show in 1924. But let’s start at the very beginning…

William E. Brough was the father of this legendary motorcycle brand. For a long time he worked as a steam engine engineer, but at the end of the 19th century he focused his attention on the rapid growth of methods of personal transport, particularly of motorcycling. His engineering background and natural ingenuity have helped him a lot on this path, and in 1915 William already produced the high quality cars and motorcycles, with boxer engines of own design.

William’s son George was more in favour of V-twin engines and after the First World War, in 1919, built his first ‘superior’ motorcycle. Details of a new Brough Superior motorcycle were announced on November 29, 1920 at Olympia Show. The most striking feature of this motorcycle was the rounded saddle tank, which was nickel-plated with a black top panel. The next feature to attract attention was the V-twin overhead-valve JAP engine of 1000cc. Out of 161 machines displayed at the show, no fewer than fifty were V-twins and all were intended for use with a sidecar. Most sport vehicles of the 20s had smaller size engines that’s why Brough Superior Mark I had no competition at the time.

George Brough was a repeated winner of various motorcycle races, a constant participant of the International Six Days’ Trial, so he always tried to create the vehicles that would satisfy even the most fanatical motorcyclists like himself.

For comparison, we will give prices for other machines of the 1921 season:

The table above shows that George Brough had judged the market well and offered a unique product at reasonable price. Speaking of uniqueness, George claimed that he was the innovator of a saddle tank. It was the most stylish of all designs available at that time and within a year, other manufacturers had also begun to fit rounded saddle tanks into their models.

The SS80 (SV) model was first displayed to the public at Olympia Show in 1922; it joined the established Mark I and Mark II models as part of the Brough Superior model range for 1923. In order to prove the fact that his motorcycles are the best, George accompanied each serial motorcycle with a special certificate, confirming that the complete machine as delivered to the customer had exceeded 80 mph. The SS80 model attracted even more attention after George Brough, in 1922, on a specially prepared version of the motorcycle, passed a circle on the famous Brooklands track at an average speed of more than 100 mph, setting an absolute speed record for side-valve motorcycles

In 1924, at the same Olympia exhibition center, George Brough introduced a new overhead valve model – the Brough Superior SS100. The JAP company has offered a new ohv engine for this model, yet with the open valve drive mechanism, and George has developed a new frame specifically for this motor. In the same year a gas handle appeared in the design of Brough Superior instead of a hand-lever.

The SS100 was a development of the SS80 and claimed to be an exact replica of the machine used by Bert le Vack during 1924 to break nine world speed records, including the world’s fastest solo record – 119.74 mph. It was fitted with the four-cam JAP KTOR engine that gave a 50% increase in power over the side-valve engine used in the SS80.

Probably, it is worth explaining what the figures of 100 in the name of the model mean, although the careful readers already know the answer. Like the SS80, the numbers in the name indicated a guaranteed speed, and besides that the buyer got a certificate that was signed by George Brough himself, saying: ‘The manufacturer’s guarantee that the motorcycle really developed a speed above 100 mph (160 km/h) on a quarter of a mile (0.4 km). For such tests, a private road of 1.75 miles (2.82 km) was kindly made available to the manufacturer.’

George’s dream was an ideal motorcycle, because it is faster and more convenient than a car. In 1927, 1928, and then in 1931, George lost an entire fortune trying to realize the dream of a four-cylinder motorcycle. At first it was the V4 engine, then the inline 4-cylinder MAG, but only the vehicle introduced in 1931, the Brough Superior Austin 4 went into serial production. Unfortunately, the serial version was very different from the advertising brochures, and the motorcycle engine did not give enough power, thus the release stopped after 10 copies. A detailed story about these machines is available in an article devoted to Austin Four from the collection of the ‘Motorworld by Vyacheslav Sheyanov‘ museum.

By the beginning of the 1930s, JAP company remained the main supplier of engines in the British market. The JAP side-valve engine remained the standard fitment for the Brough Superior SS80 and the ohv JAP engine was an option for the SS100 model. As a perfectionist, George always chose the best parts for his motorcycles, but the quality of the JAP engines to George’s great displeasure was gradually reduced due to the almost complete absence of competitors and, moreover, a large number of orders negatively affected the level of service performed by JAP.

Finally, George changed the supplier and returned to the market in 1935 with a new SS80 Special model, this time with an engine created by Associated Motor Cycles (Matchless). The following year, the SS100 also received a new Matchless engine, as before, with an upper valve arrangement. This was the only engine brand that these two models used, until production ceased in 1939.

As before, George liked to arrange performances and prove the fact that his motorcycles are the best on the market and worth every shilling. For example, annual runs from London to Edinburgh, to which George liked to take one of the journalists. Often it was Henry Laid, a famous reporter from the MotorCycling journal. At the disposal of Motorworld there is an article dated June 14, 1939, about George Brough going on a long journey riding one of his SS100. And it is worth saying that since then Brough Superior hadn’t lost the grip.

Here is a short extract from an article for you to get a sense of the superiority of this motorcycle:

‘Soon I understood how wonderful it is to travel inside a good sidecar of a 1000cc ohv motorcycle. The wind moved us forward. On the way glancing at the speedometer, I saw that we were traveling at the speed of 96 km/h. When we needed to go uphill or to pass someone, with the sharp movement of the wrist the driver would sent the speedometer arrow to the mark 104 or 112 km/h, and the noise of exhaust pipe would suddenly become a powerful roar. We had passed the Warwick village still in the upper gear at 25-30 km/h; this kind of acceleration was simply stunning, and it seemed that there was no need to use transmission under normal circumstances.’ – Henry Laid, MotorCycling magazine, October 14,1939.

Today, in 2019, in order to start the Brough you need a little more effort than just to turn a key: you have to open fuel cranes and fill the carburetor float chamber with fuel until it is full, then close the air flap by 3/4, switch the ignition back on using the left-hand handle on the steering wheel, pump the engine using a compressor which is also controlled by a lever on the left-hand handle. Now everything is ready for the engine start. From the second or third try, this ancient ‘real’ motor, which does not correspond to modern concepts of ecology, comes to life and begins to roar with its beautiful exhaust pipes.

The first gear is engaged in a modern style – with your right foot, then you slowly release the sensitive clutch. The SS100 gearbox was designed for driving with a sidecar and its low gear is quite long. Between the first and the second there is a sufficient gap in the ratios, but the three upper gears are located next to eachother and are suitable for use for both in solo version and with the passenger. Due to the high torque engine, you don’t have to change gears often and because of this motor the SS100 pulls as a real locomotive. There is enough power to accelerate from 15 to 160 km/h in the upper gear, all you need is a long enough road!

Stable at any speed Brough owes this property to a low center of gravity, one and a half meter long wheelbase and effective, according to the standards of the 30’s, Castle fork. The whole picture is spoiled by terrible drum brakes – 8-inch drums of the Royal Enfield can hardly stop the machine when it goes 160 km/h.

However, even after 80 years, the SS100 is a most desired machine and it’s even more valuable if it’s running. It doesn’t matter how much effort you have to put into taking this bike out of the garage – the emotions of the trip will pay for all costs.


* – Data on the results of metering at the exhibit “Motorworld by V.Sheyanov”. 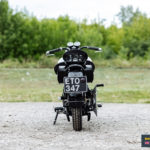 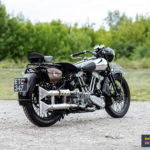 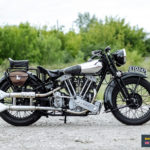 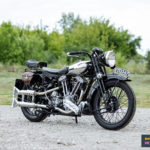 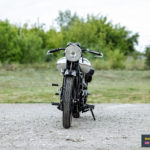 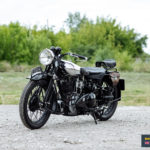 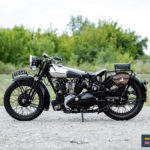 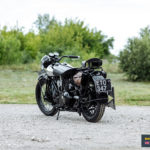 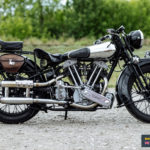 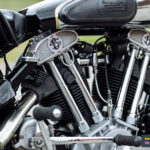 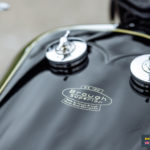 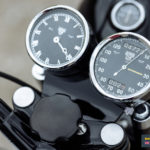 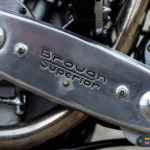 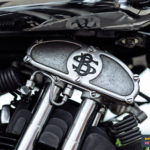 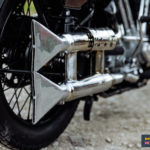 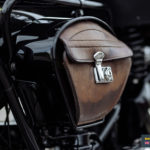 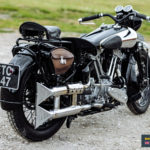 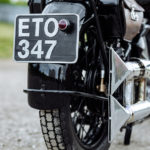 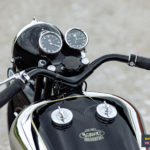 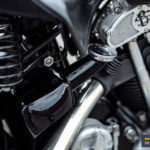 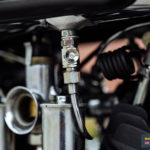 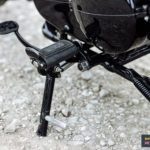 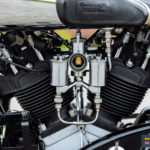 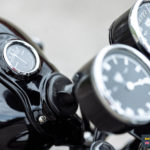 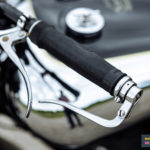 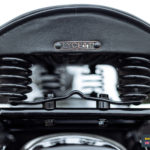 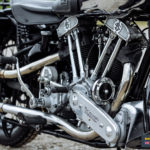 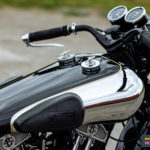 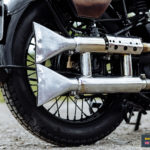