In 1940, the Neckarsulmer Fahrzeugwerke, AG, a German company located in Neckarsulm, received an order from the Ground Forces Armaments Administration (Heereswaffenamt) to develop a light tractor-trailer intended to increase the mobility of rifle units, support reconnaissance operations, tow light artillery guns and other military cargo. 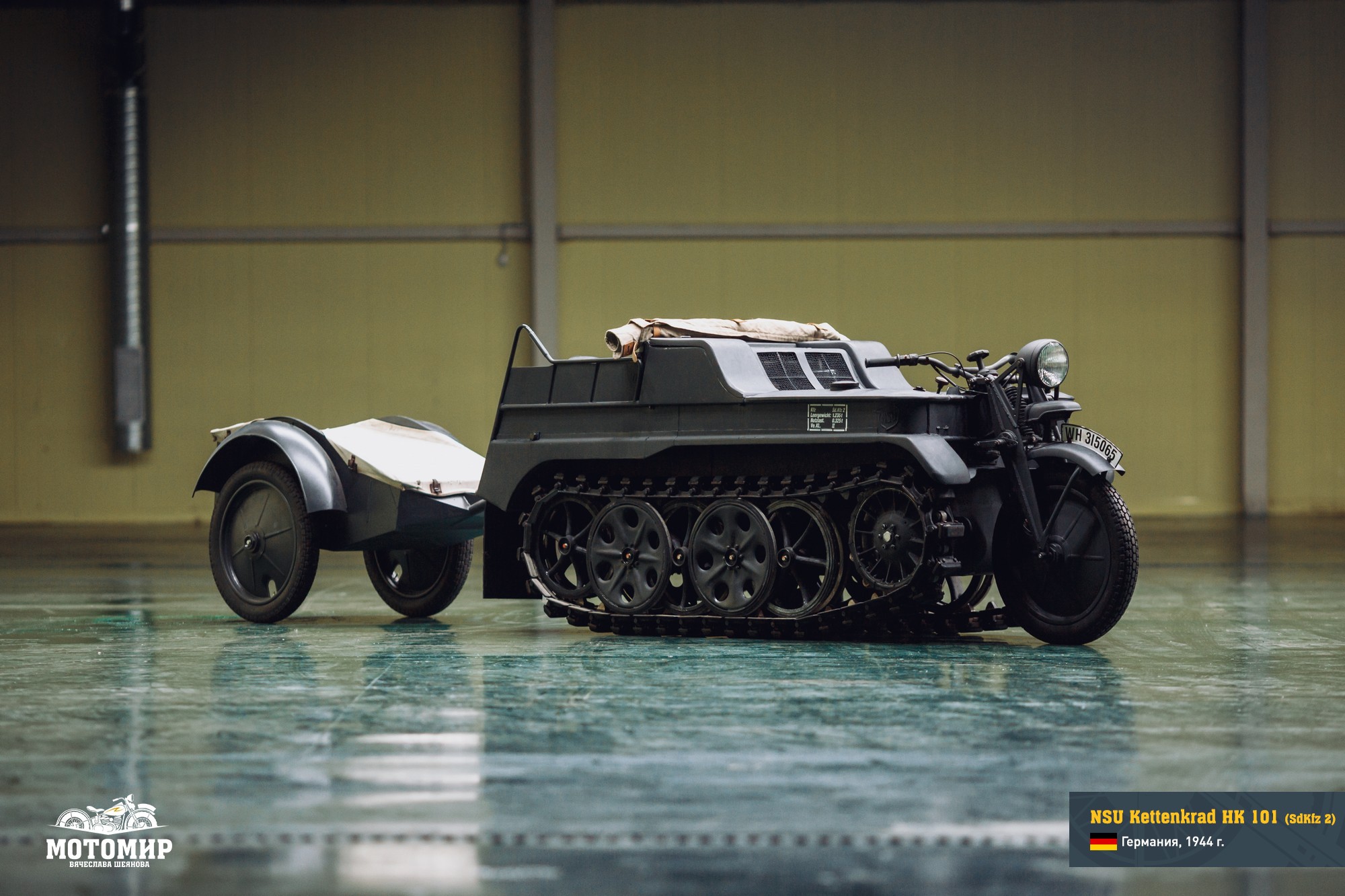 The NSU Kettenkrad HK 101 SdKfz2 was equipped with a 4-cylinder, in-line automotive gasoline Opel Olimpia engine with capacity of 36 hp at 3,400 rpm. Its transmission included a dry single-plate clutch, a 3-speed gearbox, and an auxiliary gearbox. The running gear included the front steering wheel with a motorcycle-type fork and a tracked running gear mounted on a welded carrying hull, consisting of five duplex rubber-coated running rollers, a drive wheel and a 170 mm link-belt with rubber cushions. The driver seat was in the front part of the vehicle, two more seats were arranged in the back. This model had no weapons. 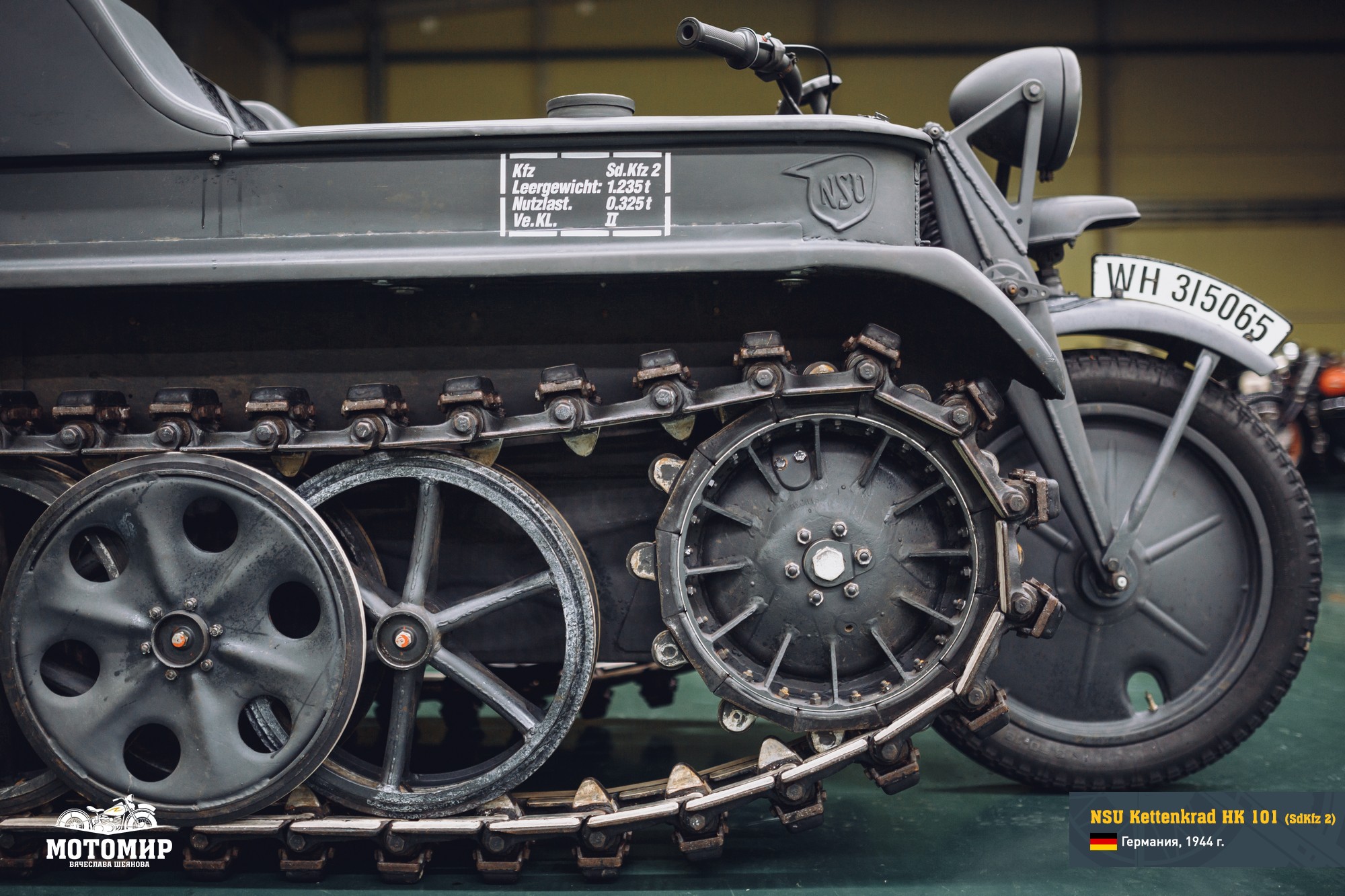 It was capable of driving cross-country in mud and even in the swamp due to low ground pressure. The weight of the motorcycle was 1,235 kg. It could carry a load of 325 kg and tow trailers weighing up to 450 kg. In addition to the driver, it could carry two more people. Fuel tanks with a total capacity of 42 liters, placed on both sides of the driver seat, provided a range of 260 km on the highway, and 175 km on rough terrain. Maximum speed on the highway reached 62-70 km/h and on rough terrain 40-48 km/h. The wide turns were accomplished by turning the front wheel and small turns via abrupt stopping of caterpillar tracks. 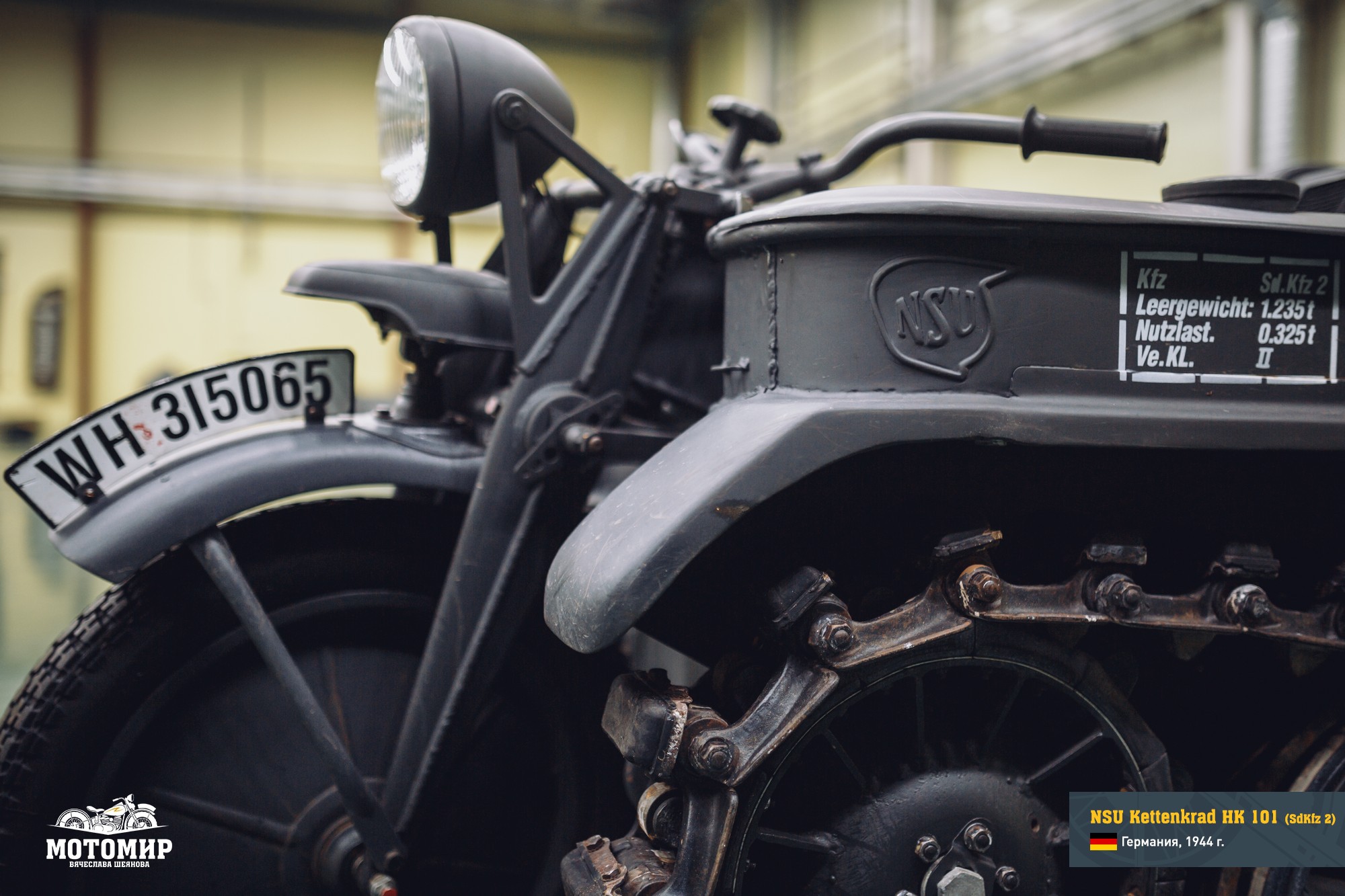 Due to its great cross-country capabilities, reliability, ease of operation and maintenance, the NSU Kettenkrad HK-101 SdKfz2 track motorcycles gradually found their way into all ground forces, including tank units. They were able to act in the conditions of the spring and autumn disarray on the Soviet-German front. Nevertheless, the machine had some flaws: narrow track, full exposure of the crew and vehicle’s tendency to turn over when going over the hills or making a turn at high speed (a driver never had enough time to leave the vehicle).

The value of our Kettenkrad is in its release time. It was manufactured in war time, in 1944. Most of the machines of those years were either destroyed in battle, or used in such harsh conditions that they did not survive to this day.

For example, at the end of the Second World War, in order to save aviation fuel, the planes were no longer allowed to move along the runways, so they were pulled by Kettenkrads, which often worked with serious overload.