First public appearance of the Matchless Silver Hawk happened in London on November 10, 1930, at the exhibition in the famous Olympia Exhibition Center. It immediately drew a lot of attention due to its four-cylinder motor feature. Double-cylinder machines are not unusual today, but in the 1930s in England any motorcycle with more than one cylinder was considered prestigious while four-cylinder machines were a true luxury. This is the reason why the Silver Hawk, one more of Herbert Collier’s designs (he was the founding father of the brand), became company’s flagship.

Silver Hawk’s forerunner was Silver Arrow, a compact V-shape, twin-cylinder, 397-cc, narrow-angle (18-degrees) machine. Herbert Collier’s son, Charles, designed the Silver Arrow. This motorcycle was not successful: even though it was showing a great soft riding quality and was pretty much quiet, it was not fast, because its engine’s rated output of 16 h. p. did not allow reaching velocities over 95 km/h. On top of that, this motorcycle had other problems: its engine got overheated very often, along with breakdowns of its transmission and brake gear. Despite high praise in the press, this motorcycle sales were poor. 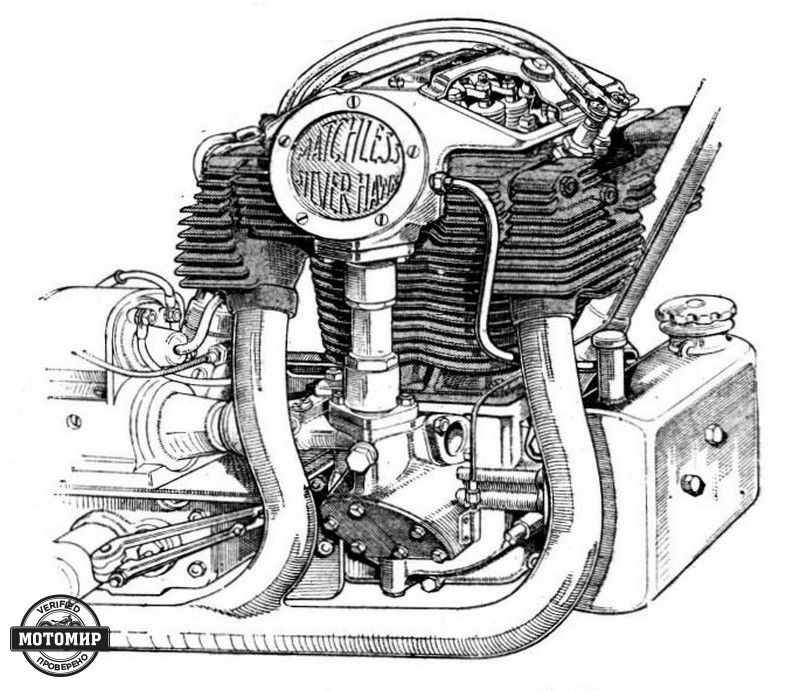 Engine of the Matchless Silver Hawk

Charles Collier’s ideas, however, were interesting and the motor of the Silver Arrow was innovative for its time, so Herbert decided to refine this design eliminating his son’s mistakes. Engine capacity grew to 592-cc, engine rating was increased to 36 h. p. The upper camshaft for four cylinders was driven by a single shaft (as opposed to its main competitor, Ariel Square Four, where it was driven by two shafts), and all four cylinders were fed from a single Amal carburettor. The disappointing 3-speed gearbox was replaced by a 4-speed gearbox. The upper speed limit reached 137 km/h.

This is how Silver Hawk appeared on the scene—the first ever V4, dry sump motorcycle. Its motor was very unusual. 4-cylinder motors were made in accordance with inline design in those days (as in the above mentioned Ariel), but this was increasing the wheelbase and made the motorcycle quite bulky. V-shape 4-cylinder arrangement solved this problem, and thus the output of the 4 cylinders along with the compact shape of the engine provided a sporty look for the Matchless Silver Hawk, which was exactly Collier’s intention. Besides, rear suspension was sprung—one more achievement for the Silver Hawk, the only 4-cylinder motorcycle that had such an advantage in the 1930s.

Serial production of this motorcycle model started in 1931. Unfortunately, this was not the best time for luxury models, because the world was still experiencing global financial crisis. Silver Hawk’s structural complexity and, consequently, its high price resulted in relatively low sales: some machines were made custom-built, piece by piece. Eventually, after four years of production, the production of Matchless Silver Hawk was discontinued, while it remained a legend of a motorcycle so that today this is one of the rarest models around the globe.